Phil among 11 from LIV to file suit vs. PGA Tour 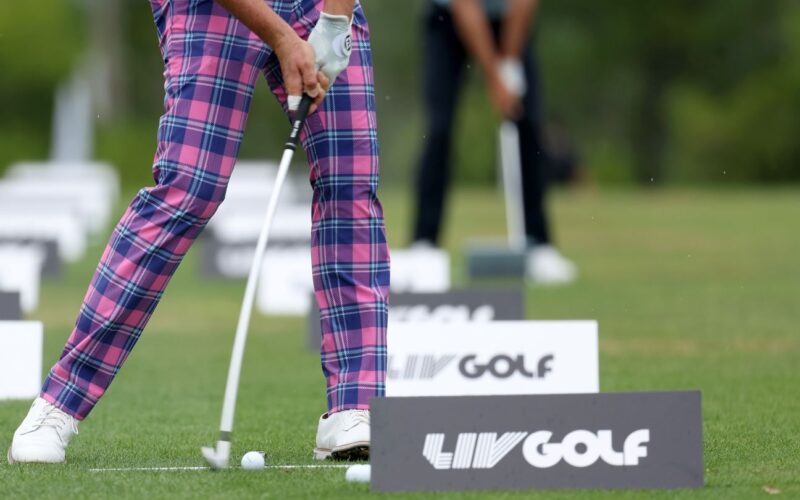 Phil Mickelson, Bryson DeChambeau and nine other golfers suspended by the PGA Tour for joining LIV Golf have filed an antitrust lawsuit against the PGA Tour on Wednesday.

In addition, three of those golfers are seeking a temporary restraining order from a federal judge that would allow them to compete in the upcoming FedEx Cup playoffs.

The lawsuit, which was filed in the U.S. District Court of Northern California, requested relief that would allow Talor Gooch, Hudson Swafford and Matt Jones to play in the three FedEx Cup playoff events, starting with next week’s FedEx St. Jude Championship in Memphis.

“The punishment that would accrue to these players from not being able to play in the FedEx Cup Playoffs is substantial and irreparable,” the golfers’ attorneys wrote in the lawsuit, “and a temporary restraining order is needed to prevent the irreparable harm that would ensue were they not to be able to participate.”

Carlos Ortiz, Ian Poulter, Peter Uihlein, Jason Kokrak, Pat Perez and Abraham Ancer are the other plaintiffs identified in the antitrust lawsuit, a copy of which was obtained by ESPN on Wednesday.

Last month, two player managers confirmed to ESPN that the U.S. Department of Justice has opened an investigation into the PGA Tour’s handling of its players and whether it has engaged in anticompetitive behavior during its ongoing battle with LIV Golf.

“As part of its carefully orchestrated plan to defeat competition, the Tour has threatened lifetime bans on players who play in even a single LIV Golf event,” the lawsuit says. “It has backed up these threats by imposing unprecedented suspensions on players (including the Plaintiffs) that threaten irreparable harm to the players and their ability to pursue their profession. It has threatened sponsors, vendors, and agents to coerce players to abandon opportunities to play in LIV Golf events. And it has orchestrated a per se unlawful group boycott with the European Tour to deny LIV Golf access to their members.”

In a memo sent to PGA Tour players Wednesday, commissioner Jay Monahan wrote that the tour “will continue to defend the members who abide by the regulations written by and for the players.”

“We have been preparing to protect our membership and contest this latest attempt to disrupt our Tour, and you should be confident in the legal merits of our position,” Monahan wrote in the memo, a copy of which was obtained by ESPN. “Fundamentally, these suspended players — who are now Saudi Golf League employees — have walked away from the Tour and now want back in. With the Saudi Golf League on hiatus, they’re trying to use lawyers to force their way into competition alongside our members in good standing.

“It’s an attempt to use the TOUR platform to promote themselves and to freeride on your benefits and efforts. To allow reentry into our events compromises the Tour and the competition, to the detriment of our organization, our players, our partners and our fans. The lawsuit they have filed somehow expects us to believe the opposite, which is why we intend to make our case clearly and vigorously.”

According to the lawsuit filed by the LIV Golf members, PGA Tour players who appeared in the first three LIV Golf tournaments — a group that includes Mickelson, Gooch, Swafford, Jones, Uihlein and Poulter — are facing nearly two-year suspensions from the tour, through at least March 31, 2024.

The lawsuit said Mickelson, a six-time major champion, was originally suspended for two months by the PGA Tour on March 22 for, among other reasons, “attempting to recruit players to [LIV Golf].” An appeals committee upheld Mickelson’s suspension. His request for reinstatement about two months later was denied because he had played in the first LIV Golf event in London. At that time, it was extended by a year. It was extended by another when he played in Portland.

The lawsuit noted that DeChambeau, who has been suspended by the PGA Tour through March 31, 2023, was “sent notice that it was sanctioning him for talking to other Tour members about the positive experiences he had with LIV Golf.”

The three players filing suit to compete in the upcoming FedEx Cup playoffs were suspended from the PGA Tour after they competed in LIV Golf events without a conflicting-event release. Gooch is ranked 20th in the FedEx Cup points standings, Swafford is 63rd and Jones is 91st. The top 125 players in points are eligible for the first FedEx Cup playoffs event.

Among other things, the players’ attorneys argued in their motion that prohibiting them from competing in the FedEx Cup playoffs would restrict them from gaining Official World Golf Ranking points that would allow them to gain exemption into the four major championships next season.

“The Tour’s conduct serves no purpose other than to cause harm to players and foreclose the entry of the first meaningful competitive threat the Tour has faced in decades,” the lawsuit says. “Banning Plaintiffs and other top professional golfers from its own events degrades the Tour’s strength of field and diminishes the quality of the product that it offers to golf fans by depriving them from seeing many top golfers participate in Tour events. The only conceivable benefit to the Tour from degrading its own product in this manner is the destruction of competition. Indeed, the Tour has conceded its nakedly anticompetitive purpose in attacking and injuring the players.”

The FedEx St. Jude Championship and the BMW Championship, the second leg of the FedEx Cup playoffs, each have purses of $11.5 million. The season-ending Tour Championship at East Lake Golf Club in Atlanta has a $75 million purse, with $17.5 million going to the winner.

More than two dozen players, including past major champions Dustin Johnson, Brooks Koepka, Patrick Reed, DeChambeau and Sergio Garcia, have been suspended by the PGA Tour for competing in LIV events. Johnson and Garcia are among the players who have resigned as PGA Tour members.

The lawsuit claims that the PGA Tour has pressured the major championship governing bodies to do its bidding. It added that Augusta National Golf Club chairman Fred Ridley “threatened to disinvite players from The Masters if they joined LIV Golf,” that he “personally instructed a number of participants in the 2022 Masters not to play in the LIV Golf Invitational Series” and that Ridley declined to meet with LIV Golf CEO Greg Norman to understand the new circuit’s business model.”

Several of the suspended players already have exemptions into at least some of the majors as past champions. For instance, Mickelson has career exemptions at the Masters and PGA Championship, an exemption at the U.S. Open until 2026 and an exemption at The Open until he turns 60 (he is 52). DeChambeau, who won the 2020 U.S. Open at Winged Foot, is exempt in that event until 2030 and at the Masters, The Open and PGA Championship until 2025.