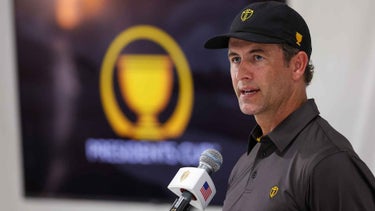 Patrick Cantlay has no plans to join LIV. Still, he thinks the decision is more complex than simply staying or leaving.

Patrick Cantlay has no plans to join LIV. Still, he thinks the decision is more complex than simply staying or leaving.

CHARLOTTE, N.C. — The interview room is emptying out. His teammates are on to their next obligation. But Patrick Cantlay sits on a stair at the side of the room, left foot resting on his right knee, thinking out loud.

“Imagine a picture on a wall,” he says. “If I have a tough decision to make, a complex issue I’m trying to navigate, I’ll call four or five people that I think are the smartest in that subject matter. I might have 25 to 30 percent of the picture filled in. By the time I’m finished talking to those people, I might have 90 or 95 percent. They may all say don’t do it and I may still do it. But I’m better off for having heard.”

We’re talking about how golfers make decisions, which means the conversation has made the inevitable leap to the topic of LIV vs. the PGA Tour. Cantlay has thought plenty about it. He’s imagined pictures on walls. He’s called subject-matter experts. And he’s decided that the decision players are continually asked to make — LIV vs. the PGA Tour — doesn’t actually exist. At least, it’s not black and white the way they think it is.

Cantlay has no plans to join LIV. There will be no announcement this week trumpeting the fact that the World No. 4 has jumped ship. But he doesn’t want you to mistake his current commitment to the PGA Tour with a permanent, unending loyalty.

“It’s an ever-evolving calculation, right?” he says. “Because if 20 of the 24 guys here this week go out and play the other tour, then it makes it way more likely that I’m going to want to go to the other tour. So to say that I would never, ever play on that tour — I don’t think that’s truthful.”

Part of the experience of talking to Patrick Cantlay is recognizing that he does not like to say things that are untrue. Many people have this instinct, but Cantlay seems fully committed to it; to say something false or imprecise would violate his way of being. He knows other pros lack that same precision, but he’s still surprised others have been so outspoken about their decisions, whether in leaving or going, knowing the uncertainty of the future.

“If you’ve been reading the Eamon Lynch articles [on Golfweek], nobody wants that written about them,” he says.

Cantlay enters this week’s Presidents Cup on the heels of another strong season. He defended his title at the BMW Championship. He finished T7 in the final FedEx Cup standings. He finished inside the top 10 in 11 of his 19 PGA Tour starts. Now he returns to Team USA, where at 30 he’s suddenly become something of an elder statesman.

“I think you just kind of look around, and you go oh, who’s the oldest guy here, and there’s maybe only two or three guys older than you. And then you start thinking, I’m pretty old,” he’d said just earlier, addressing a pool of reporters.

I ask if there are exceptions, like when rumors circulate of his own defection to LIV. Does he have people who tell him these things? He laughs.

“What is going to improve my life if they tell me something that’s happening on social media?”

But being old-school isn’t the same thing as opposing change. Cantlay believes his methodical approach to decision-making — and his certainty once he arrives at a decision — means he frequently ends up going against the grain. Does that make him a contrarian?

“I consider myself able to stand in the minority if I think I’m right,” he says. “So if I do that enough times, then I will get labeled as a contrarian.”

He doesn’t mind the label. Nor does he mind a healthy debate. “Everyone has a negative connotation to ‘argue,’ he says. “But I like debating.” He’s engaged in plenty of debates this year. Most aren’t about LIV vs. the PGA Tour — but plenty are, too. I ask about his role in the Tour’s players-only meetings, where he acknowledges engaging in some healthy debate.

The alternative, he says, is blindly supporting the status quo. Supporting the way things have always been done. The default.

“I think players in general don’t realize the power that they have,” he continues. “I think they in general have a lot more power than they think. And they’re very reluctant to view things through a lens of: How do I do better for professional golfers?“

I ask Cantlay if he thinks professional golfers have had a good year as far as power goes.

And that has been good for the players?

“It’s definitely been a good thing for professional golfers.”

How about for professional golf?

“That’s a different question. Philosophically, it’s a tough question.” He pauses. “I think it’s not good for professional golf to be fractured. Like, I would love for [Dustin Johnson] to be here. I would love Cameron Smith to be on the International team. I would love to have the best competition you could possibly have.”

If he looks into his crystal ball, Cantlay suspects professional golf will settle somewhere in the middle. That’s another reason he’s surprised the conversation around it has gotten so heated.

“It’s been so contentious, and it seems like it just continues to be contentious,” he says. “I would be surprised if there’s not some coming-together intervention because I just don’t know of any sport, really, that has a legitimate fractured sport.”

He could be wrong. He doesn’t know how the Tours would compromise or who would help them do so. But when he looks at other sports, all the best players tend to play in the same league.

“We had the American Football League. That went away. I mean, nobody continued to play on the American Football League,” he says. “So I just feel like at some point, when you start looking back on it, people will be surprised to hear, ‘Oh, man, it was really contentious.’ Because it will feel like a blip on the radar once it’s all settled. It’s just, right now, it’s very unknown.”

The author (cautiously) welcomes your comments at dylan_dethier@golf.com.