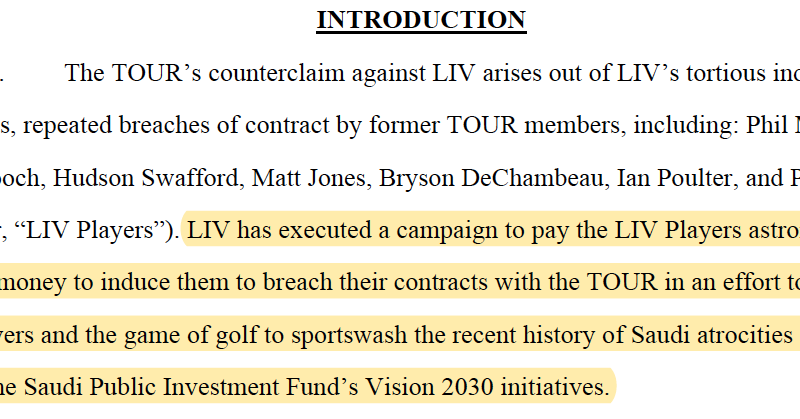 The PGA Tour has responded to LIV Golf by countersuing it in court. Here’s where the lawsuit stands and what to expect moving forward.

The PGA Tour has responded to LIV Golf by countersuing it in court. Here’s where the lawsuit stands and what to expect moving forward.

If it feels like everyone is suing everyone in the golf world these days, well, that’s because it’s sort of happening. In the wake of Patrick Reed suing the Golf Channel, Brandel Chamblee and a handful of other journalists, and in response to being sued by LIV Golf and three of its contracted players, the PGA Tour is retaliating, filing a countersuit against LIV and those three golfers.

The countersuit comes first with an answer to the amended complaint by LIV Golf. While eight of the original plaintiffs (the lead of which was Phil Mickelson) have dropped out, Matt Jones, Bryson DeChambeau and Peter Uihlein remain, joined by LIV Golf itself. So the focus of the Tour’s response is tighter than it would have been.

The Tour argues, “There is no actual injury to the plaintiffs here, and no violation of the law. LIV, by its own admission, has succeeded in attracting numerous elite professional golfers to participate in its new league. LIV has held numerous events with full fields and has announced a full season for 2023.

Within its countersuit, the Tour also shows no problem arguing that LIV Golf is an entity for sportswashing, as it has been popularly criticized. “LIV has executed a campaign to pay the LIV Players astronomical sums of money to induce them to breach their contracts with the TOUR in an effort to use the LIV Players and the game of golf to sportswash the recent history of Saudi atrocities and to further the Saudi Public Investment Fund’s Vision 2030 initiatives.”

LIV Golf promptly responded with a statement Thursday morning: “The Tour has made these counterclaims in a transparent effort to divert attention from their anti-competitive conduct, which LIV and the players detail in their 104-page complaint. We remain confident that the courts and the justice system will right these wrongs.”

This comes after a week filled with legal announcements. Mickelson and three other LIV golfers withdrew from the initial lawsuit, with Mickelson saying in a statement, “With LIV’s involvement in these issues, the players’ rights will be protected, and I no longer feel it is necessary for me to be part of the proceedings.”

Reed, who had originally filed a $750 million defamation suit at Brandel Chamblee and Golf Channel, withdrew that suit from the state of Texas, only to refile it in the Middle District Court of Florida, in Jacksonville. The PGA Tour’s Wednesday answer was a standard part of the legal process, in which defendants respond to an amended complaint. In other words, we expected some answer from the Tour to the dozens of anticompetitive allegations LIV Golf claimed. We didn’t exactly expect a countersuit.

As can be the case in court, the Tour denied many of the allegations — such as LIV believing the Tour has engaged in a “group boycott” with the DP World Tour and the governing bodies that represent the major championships, and much of the Official World Golf Ranking board of directors. In total, there were more than 300 paragraphs in the original complaint, which stretched more than 100 pages, all of which the Tour would be issuing some response to.

Exhausting as that may be, there can be interesting factoids hidden deep within complaints, amended complaints and answers to amended complaints, as the golf world is no doubt learning. For one, LIV Golf alleged that the PGA Tour did not require Tour members who competed in the JP McManus Pro-am to obtain media rights releases from the Tour. The Tour, in its Wednesday response, outright denies that claim. It’s not the most invigorating information, but it nonetheless pokes various holes in the original and amended complaints filed by LIV and the plaintiff golfers.

This seesawing of claims can, at times, seem like bickering. LIV Golf believes that the PGA Tour has been against this type of competition for nearly 30 years now and claims the Tour thwarted Norman with letters to players back in 1994. The PGA Tour says it cannot admit or deny that happened because it is currently “without sufficient evidence.” All of which leads us to the next stages of the lawsuit: discovery.

Did this happen to Norman back in 1994? LIV may have to prove it through discovery, which is simply the collection of documents, depositions and information that will be used to argue its case in court. Could those alleged letters from 1994 be an asset to LIV? Perhaps! But we are still a full 15 months from a trial by jury in this case. There are some obvious proof-finding steps in the interim.

According to the schedule agreed upon by LIV, the PGA Tour and the players and approved by Judge Beth Freeman, the next six months will include the production of discovery documents, data and non-expert discovery. During this time, it is not only plausible but likely that key figureheads in the LIV Golf vs. PGA Tour world are deposed. Representation from both sides have met in past weeks to define what will and won’t be included during the discovery phase, as well as who can or cannot represent each side. For example, LIV has taken issue with the PGA Tour’s request to have a “consulting outside counsel,” who works for the same firm as Ed Hirlihy, a member of the PGA Tour’s 10-person advisory board.

If your head is spinning, that’s OK. The tentacles of LIV Golf vs. the PGA Tour stretch a long way.