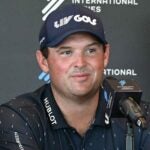 Patrick Reed at this week’s International Series Singapore event on the Asian Tour.

LIV golfers, Patrick Reed says, are “sick and tired” of hearing about money.

And they can “hold their own” against PGA Tour players, he said.

No, Reed was not shy ahead of his play at this week’s International Series Singapore event on the Asian Tour, then again, it’s not as if he would say the opposite, either. Still, his words were bold.

To begin, we should note why Reed is playing overseas. It’s by choice, though the explanation is long-winded, and the sequence came in short order, starting in June. He signed on to play with the controversial, Saudi-backed LIV Golf Series after playing in 14 Tour events this year. He resigned his Tour membership. He’s played in two LIV events. He was suspended by the Tour for doing so. He committed to both the Singapore event and next week’s International Series Korea tournament on the Asian Tour, which LIV Golf purchased a controlling stake in last year. LIV doesn’t receive world-ranking points, but the Asian Tour does, so it’s an avenue for Reed and potentially other LIV players.

Which brings us to earlier this week, and this short but notable comment from Reed on his state of affairs.

“I’m ready for the LIV golfers to go ahead and play against guys on the PGA Tour,” Reed said. “I’m pretty sure we can hold our own.

“At the end of the day when you go out there, you’re playing more than just for yourself, that you’re part of a team, and we’re all motivated to win trophies. There’s a reason why these top players, all these great golfers are coming over, because they believe in the product, they know it’s the right thing.”

OK then. Starting from the top, PGA Tour v. LIV Golf on the golf course is but a fantasy game — after this week’s court case and the one in the future, it’s highly unlikely — so we’ll give you the facts and let you determine who would win. All 15 of the world’s top 15 play on the PGA Tour; 14 if you believe the rumors that world No. 2 Cameron Smith will soon join LIV. LIV’s highest player is No. 18 Dustin Johnson, and No. 23 Abraham Ancer, No. 25 Brooks Koepka, No. 28 Louis Oosthuizen, No. 32 Paul Casey, No. 33 Bryson DeChambeau and No. 34 Kevin Na also play with the upstarts. We’ll note that LIV player rankings are dipping due to a lack of play in events where points can be earned.

Motivation to join LIV is harder to quantify. Or maybe not. There are facts here, too, and you can make your own determinations. We’ve heard some of the rationale — a chance to grow the game, an opportunity to try something different, the ability to spend more time with family due to LIV’s shorter schedule, which Reed noted ahead of his first LIV event, though he’s now playing back-to-back weeks in Asia, and he said other LIV players will likely soon take up a similar schedule. And we’ve heard about the signing bonuses. And we’ve seen the payouts — everyone cashes in the no-cut events, winners earn $4 million.

Still, Reed doubled-down on LIV being more than money.

“I think it’s amazing,” The Straits Times reported Reed as saying at the event. “I think it’s innovative and it’s a new way of looking at golf. You look at all the old traditions in the game of golf, and they’re great. I mean obviously tradition is always great in every sport, but you have to evolve to keep up with the times.

Speaking of the golf, Reed has shot rounds of 73, 68 and 72 this week in Singapore, and he enters the final round 11 shots back of leader Phachara Khongwatmai.