Padraig Harrington played with amateurs for a week. He found 2 key takeaways 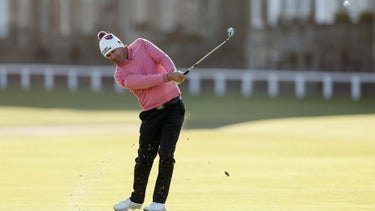 Padraig Harrington played with amateurs for a week at the Alfred Dunhill Links Championship. He found 2 key takeaways.

Padraig Harrington played with amateurs for a week at the Alfred Dunhill Links Championship. He found 2 key takeaways.

#paddysgolftips. A point from watching the ams.”

Padraig Harrington, a professional, played with the amateur folk last week at the Alfred Dunhill Links Championship. He saw some things. And he found his iPhone. And thumbed out 1,113 characters, over 202 words, over four tweets, at about 6:30 at night, Scottish time.

Lucky us. Harrington, a three-time major winner and last year’s European Ryder Cup captain, has donated his wealth before; you may have seen similar tweets, or his YouTube series, all under the label “Paddy’s Golf Tips.” And this is that. Call it amateur hour.

His takeaways were two.

In short, the first was this: Hands first. Then the body.

“The only thing that squares the clubface is your hands, not your hips not your turn,” he wrote in his first tweet. “Yes your turn can change where your hands are but you are probably better focusing on your hands and let your turn react to them. @dunhilllinks”

“Most ams believe turning faster/more open adds power,” he wrote in his second tweet, continuing the first. “In a perfect world yes but generally this isn’t the case for the ams as their arms just don’t keep up. Most of the speed in the swings comes from the arms and hands. Focus on moving these fast and let the body respond to them.”

“To learn the feel of a square clubface. Work alternative shots with your hands/clubface extremely shut and then extremely open at impact,” he wrote in his third tweet. “It’s hard to feel a small change, that’s why you practice the extreme alternatives that would be too much to use on the course. @DPWorldTour”

Good stuff. It’s worth noting in talking power and positioning that both have been a focus for Harrington; he’s No. 1 this season on the PGA Tour Champions circuit in driving, by seven yards.

Takeaway two was one tweet, and you’ve heard some of this before, though maybe not this way.

Head down. But not still.

“Another common trait by the ams is keeping their head down and still,” Harrington wrote. “By all means keep an eye on the ball but it’s best to turn your head back in the backswing and forward through impact. The picture above is a static picture of a dynamic position. @dunhilllinks #paddysgolftips”

On Saturday, Harrington had more.

A day earlier at the Alfred Dunhill, Scotland had its way with the field; rain, high winds and low temps ballooned scores across St. Andrews, Carnoustie and Kingsbarns. And reporters not so much wanted to know what went down, but how to get through it.

“Yesterday, the weather was horrific, 10 guys broke par, and I would hazard a guess that a lot of people would have picked you as one of the guys that might have been able to do it,” a reporter started. “What is mental toughness when it comes to golf?”

“I’m not 100 percent sure,” said Harrington, who was, in fact, under par on the day in question, with a one-under 71 at Kingsbarns. “It’s something that I’ve always had. There’s no doubt you’ve got to be resilient. But I think when it comes to bad weather, you just have to manage your game and your expectations. It does help, and it helps to get ahead of the game.

“I started OK. I made a birdie early enough. It helps to have a good start and have some momentum in your group. But overall, it’s managing expectations and managing your game. Sometimes a good shot, a smart shot is, dare I say, take extra club. And if you hit it well, you’re going to be past the flag, but the likelihood of that happening in bad weather — you have to play sensible golf.

“No doubt you have to chip and putt well, which is something I’m good at. A lot of resilience, but a lot of good mental fortitude of managing your way around the golf course.”

“You’re a 15-time winner on the DP World Tour; explain what makes a great links player versus normal conditions.”

“To be honest, we’re seeing a lot more golf — professional golf goes to really nice conditions, everything perfect,” Harrington began. “And there’s a big pool of players now playing, and if any one of them plays well, they are great. Whereas you go to links golf, it takes more than swinging a golf club to get around a links golf course.

“And sometimes hitting too well is a problem. I saw on TV, Rory put it in the water at the first. You don’t want to have that strike at times. You have to take your spin off, and you have to play sensible shots. I think I had 190 yards to the first. I hit 9-iron just so it would not spin back in the water. You have to be clever at times with not hitting it too well — is that a terrible thing to say? And other times, you have to hit some great shots.