Padraig Harrington is winning more. He has one key thought as to why 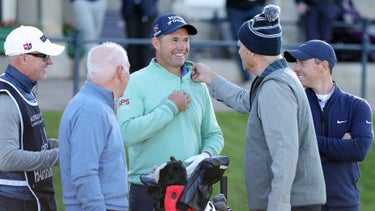 Padraig Harrington is winning at an incredible clip on the PGA Tour Champions. He has one key thought as to why.

Padraig Harrington is winning at an incredible clip on the PGA Tour Champions. He has one key thought as to why.

“So you’re not one for moral victories, right? Second place is not — is just …”

The reporter didn’t finish their question. Or maybe couldn’t. The nerve was struck with Padraig Harrington.

These days, wins and Harrington are going together like the Irishman and a well-poured Guinness. He’s been on a run. Over the past four months, he’s played in eight events on the PGA Tour Champions circuit, and he’s been low man three times, which includes a win at the U.S. Senior Open. So that naturally turns the conversation with him to how he’s doing it all, and you can tell Harrington has spent time thinking about it, too. And essentially it’s this:

“There’s no doubt I sharpened up a bit by being on top of the leaderboard a lot,” Harrington said Wednesday ahead of this week’s Furyk & Friends events on the Champions tour. “When you’re up there, you turn up at a PGA Tour event, you finish 20th, you’re six shots behind the lead. So you go home and you think to yourself, god, I’ve got to hit the ball better. You go start working on your technique and things like that.

“You turn up at a Champions Tour event and you lose the tournament and you’re two shots back say. You go, I just wasn’t good with my routine on that 14 tee shot that I missed, my short game isn’t quite as tight as it should be, I should have chipped and putted that hole. So you tend to, when you’re close to winning, you tend to focus on I suppose the finer details that get you playing well, whereas when you’re six, eight shots away from winning a tournament, it’s so vast that you start thinking, well, I’ve got to work on this first before I start working on my mental game.

“So I think being on the Champions Tour has helped me not realize, I always realized it, but it has helped me commit more to being — realizing that how I’m thinking is much more important than how I’m swinging a golf club.”

The process was simple — contend! And it wasn’t — contend! While conceivably all but one player in a tournament field could tie for second, folks will finish low. Then again, that’s why Harrington is playing his golf more now with the 50-and-over set as he recently crossed the age requirement. We don’t want to say it’s easier, but the courses are more forgiving and Rory McIlroy won’t be on a Champions tee sheet for another 17 years.

Though that all raises another natural question.

Does he now have the belief he can win again with the kids? Notably, the three-time major champion played in six PGA Tour events last season and made one cut, and he’s played in five DP World Tour events, and made four cuts, including last week at the Alfred Dunhill Links Championship.

“I fully believe I’m going to go and, yeah, I did not — like just a boring average week last week,” Harrington said. “It was not like anything went — I played well on the tough days as I usually would, but physically I hit it further and I’m as good as I can be and what I’m finding is the Champions Tour has really helped me mentally. Really helped me.

“There’s an element of, as I described earlier on, I’m in contention so I’m hitting a lot more shots under pressure and feeling that intensity and I feel that’s really going to help my game.”

Still, maybe he’s found his home. And there’s nothing with that, either.

A reporter asked him this:

“Leave your major championships aside, but when you won out here, did you feel just as much a sense of satisfaction as winning a Tour event?”

“Like, honestly, I prefer — I’m not joking with this: I would prefer to win here than finish second at a PGA Tour event. You know, winning is winning, there’s something about it. OK, it’s a smaller pool out here and, you know, you can look at it like that, but the fact of the matter is putting yourself under pressure out there and having to hit the shots when people are watching when it counts is what’s exciting. No amount of — no amount of finishing top-10 and somebody patting me on the back will do. I couldn’t tell you when I — I wouldn’t remember a top-10, but I’ll remember a win out here on the Champions Tour.”

And that leads us back to the beginning.

And how he’s been doing this all of late.

If you don’t want to scroll back to the top, we’ll type it again for you.

“So you’re not one for moral victories, right? Second place is not — is just …”

You know the answer, but here’s Paddy.

“Well, I had over 30 in my regular career, second places, he said. “You know, there were all sorts. Some I messed up, some I played great to finish second. You learn a lot. They can be bitter, there’s all sorts of things going on with those second places. I don’t count — obviously somebody else counted them up. I couldn’t tell you what my top finish is, I couldn’t tell you my finishes in the majors bar the three wins. I don’t — it doesn’t make any difference to me.

“Winning is winning and that’s it, there’s nothing else of any relevance. And it’s very bad for your golf to take satisfaction out of, which I often see somebody finishing 10th and they say ‘well done.’ I’m absolutely raging. If somebody tells me ‘well done’ for finishing 17th last week, I’m raging with them.”