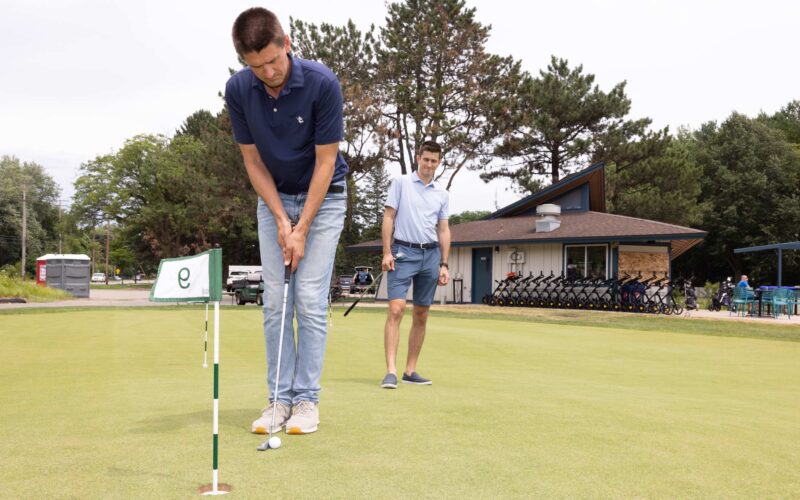 A redone municipal course in Madison, Wisconsin hopes to push boundaries — in a good way. Glen Golf Park wants to make golf for everybody.

A redone municipal course in Madison, Wisconsin hopes to push boundaries — in a good way. Glen Golf Park wants to make golf for everybody.

The Glen Golf Park is a nine-hole muni in Madison, Wisconsin.

It is also a picnic ground; a fresh-air yoga studio; a venue for live music and movie screenings; an outdoor classroom and — you get the picture. There are things to pursue here beyond par.

Though The Glen, as locals know it, draws inspiration from historic courses across the pond, it is not so much an homage to the past as it is a beacon for the future. It points to something deeper in the game’s potential and the robust role that munis can play in civic life.

“You have this beautiful open space right in the heart of Madison,” says Theran Steindl, golf operations manager for the city. “So, the question becomes: How do you make it a valuable asset to all the neighbors, not just golfers?”

Golf was the property’s raison d’être when it opened to the public in the late 1920s. In those days it was called Glenway Golf Course, a name that endured until this past summer, when renovations were completed and the whole place was reborn. Reimagining the muni was a group effort. But a driving force behind the transformation was Michael Keiser, son of Bandon Dunes founder, Mike Keiser, and a co-developer of Sand Valley.

In 2016, the younger Keiser had followed his then-fiancée, Jocelyn, to Madison from central Wisconsin, where he’d been getting Sand Valley off the ground. By the following year, he and Jocelyn were married, and both had fallen hard for their new home. This was a city where they could put down roots.

In the morning paper, Keiser read a story about the local munis. Madison had four, and they were bleeding money. A task force had been formed to find a sustainable path forward.

Keiser had some thoughts. He also had concerns about bureaucratic sloth.

“I’m from Chicago, where government does not exactly have a reputation for swift action,” Keiser says. “So, let’s just say I was skeptical that much would get done.”

To his surprise, when Keiser left a message with the Madison Parks Department, they messaged him right back. The city was eager for his expertise and input. As it happened, Keiser’s vision aligned with what many on the task force had in mind.

Munis could — and should — be about more than golf.

“We kicked around the idea of common ground, land where golf could thrive, but other activities could thrive as well,” Keiser says.

As Keiser concedes, the plan he proposed was not a novel concept. There were many templates, most famously the Old Course, in St. Andrews, which shuts down on Sundays and becomes a public park.

“I also had a vivid memory of playing at North Berwick (in Scotland) and seeing a couple of surfers cutting across the course with the boards to the coast,” Keiser says. “That’s what happens when you increase the number of stakeholders — it’s a win for the entire community.,”

Even sound ideas require a jumpstart. Michael and Jocelyn kicked things off with a generous cash infusion. Other crucial contributions came from Keiser’s contacts, an all-star team of industry stalwarts who volunteered their time and skills, including Brian Schneider of Renaissance Golf Design and Craig Haltom, a rising-star architect who, among other things, discovered the land where Sand Valley now sits.

When the redo was completed, in July, the course was vastly improved. Greens had been reshaped, sight lines sharpened, drainage upgraded. The Glen had a beautiful new body on Golden Age bones. A Himalayas-style putting green had been added, too. But the total irrigated acreage had also been reduced, swapped out for swaths of wildflowers and native prairie grasses. The new look conveyed the property’s expanded purpose. So did the new name. The place was now a park, designed to welcome everyone.

This past summer and fall, the city put in programming that followed suit, everything from live concerts and yoga classes to educational presentations by members of Wisconsin’s native Ho-Chunk nation. Food trucks set up shop in the Glen’s parking lot. Movie nights were held in the grassy amphitheater that Haltom designed on the 9th green.

Snow won’t bring an end to things. The property’s sloping grounds have long been used by sledders in the winter. Steindl said the city hopes to build cross-country skiing trails, and possibly a skating rink. In the not-so-distant future, disc golf could be added, and fat-tire biking. Bird-watching and guided nature walks could work well, too.

In 2022, the Glen turned a modest profit, which is only a small measure of its worth. The real payoff comes in memories, like this one kept by Keiser from the summer.

“We’re out there with a bunch of other families in the early evening,” he says. “There’s music playing, my young daughter is dancing, and right behind me, a bunch of kids are putting on the practice green. And I’m thinking to myself, it doesn’t really get much better than this.”

This is part of our Muni Monday series, spotlighting stories from the world of city- and county-owned golf courses. Muni story that needs telling? Send tips to munimondays@gmail.com and follow Muni Mondays on Instagram.