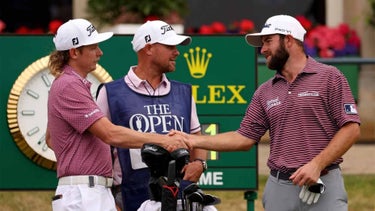 Welcome to Wall-to-Wall Equipment, the Monday gear wrap-up in which GOLF equipment editor Jonathan Wall takes you through the latest trends, rumors and breaking news.

The CJ Cup wound up being an eventful week for Cameron Young and Webb Simpson. On Wednesday, Simpson, a fellow Wake Forest alum, crashed Young’s pre-tournament press conference to let him know he’d been named the PGA Tour’s Rookie of the Year.

On Friday, Simpson offered Young something equally as important — a Titleist driver to use for the final 36 holes.

As one of the biggest hitters on Tour, Young gets his driver checked regularly to ensure everything is intact. But according to the PGA Tour, the 25-year-old felt something was amiss with his Titleist TSR3 driver as he made the turn during the second round.

Young initially thought it might be a cracked face, but a quick check revealed everything was kosher. But with a couple of heel misses producing 60 yards of curve, Young knew the head was likely compromised in some way.

In need of a driver for the weekend, Simpson came to Young’s rescue and offered up a 9.5-degree TSi3 head. It didn’t take Young long to notice an improvement once he’d equipped the head with his usual Mitsubishi Tensei 1K Pro White 70TX shaft.

“As soon as I hit the other one, the driver flights were just a lot straighter,” Young said. “I think the (original) driver was not fully intact. He (Simpson) was nice enough to give me one.”

With a loaner driver from Simpson in the bag, Young went on to shoot the lowest round of the day (66) at Congaree. He finished T23 for the week.

While most pros usually rely on a backup driver when the gamer goes awry, a few notable names have gone on to have big weeks with borrowed driver heads.

The most recent was Viktor Hovland, who borrowed a Ping G425 driver from James Hahn in Mexico and successfully defended his title last season.

Young didn’t come close to catching Rory McIlroy last week, but he wound up besting Webb by seven shots with his own driver. Not bad for a borrowed big stick.

Prior to switching to Srixon’s Tour-only ZX5 MKII LS driver last month in Napa, Matsuyama conducted shaft testing to verify the Tour AD-DI 8TX provided the best head-shaft combination. The numbers checked out on the range, but Matsuyama noticed a slight uptick in spin and peak height during competition, which prompted him to seek out something to knock down both numbers.

Matsuyama tested Ventus Black 8TX and Ventus TR Red 8X, but the Black wound up knocking down both during testing. While the numbers were good enough to warrant a switch, Matsuyama kept the shaft on a short leash after dropping a mere 0.446 strokes to the field off the tee during the first round.

Ping’s G430 continued to ride an impressive wave of momentum at the CJ Cup, where Sebastian Munoz, Tyrrell Hatton, Trey Mullinax and John Huh all made the switch. According to Ping Tour rep Kenton Oates, Munoz saw the biggest ball speed increase of the group as he made the move from G425 Max to G430 LST and picked up almost 4 mph.

“It was a combination of speed and lower spin for Sebastian,” Oates said. “Good overall feel, too.”

For Hatton, it wasn’t the ball speed that sold him on G430 but rather an improvement in overall consistency in terms of spin rate. Numbers hovered around 2,300-2,500 regardless of Hatton’s impact location.

With the move to a carbon composite body with the G430 LST, sound feedback has been positive since the Tour launch in Las Vegas. Of all the things Mullinax noticed during at-home testing, the improved sound at impact wound up closing the deal.

“For me, it’s very visual,” said Power, who finished T49. “When I swing and it comes off the face, if it comes out in the trajectory I feel it should, that’s a big positive for me, and that’s what I saw immediately.

“It felt great off the tee with a little bit of extra heat. If anything, I underspin my irons, so I’ve got that little bit of extra spin (moving to Pro V1x). I didn’t give up anything around the green. I didn’t feel any noticeable difference with the noise off the putter face, so it was an easy change for me.”