Lydia Ko’s CME win included a bizarre misstep. What happened next was something 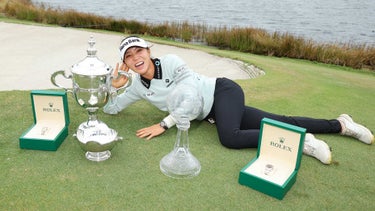 Lydia Ko’s win at the CME Group Tour Championship included a bizarre misstep. What happened next was something.

Lydia Ko’s win at the CME Group Tour Championship included a bizarre misstep. What happened next was something.

Lydia Ko, holding her club out to the left in an effort to will her ball that way, didn’t like it. Over the course of a few minutes, neither did two observers.

“Wow, I was not expecting that,” said NBC analyst Karen Stupples, herself a longtime player.

“There’s no reason to be over there,” said Morgan Pressel, also a commentator and veteran.

“To respond that way is so surprising,” Pressel added later.

“It’s one thing for Leona to hit it into the water — it was a poor shot — but I’m just completely floored at Lydia following her in there,” Stupples added later.

Ko was up one Sunday during the CME Group Tour Championship’s final round. She had five holes to go at Tiburon Golf Club. She was in the middle of the fairway after her tee shot on the 527-yard par-5 14th. She had just watched Leona Maguire, her closest pursuer in the LPGA’s two-mil-to-the-winner season-ender, mishit one into a marsh.

She dumped hers in, too. Ko didn’t go left, where you could put up a parking lot with all of the room on the dogleg right. Instead, Ko tried to parallel-park her ball into a tight window of water, bunkers and little grass on the right. And you and Karen Stupples and Morgan Pressel asked why.

And Ko said why not.

Then she won. By two.

On the hole in question, Ko didn’t want to travel that far right. But she wasn’t going left. Or maybe more accurately, she didn’t need to.

Everyone else be damned.

Afterward on Sunday, Ko was reflective, as the victory glow tends to make one. The 2014 CME winner, she’s stamped her name on the event — though, Ko’s not the fondest of that tourney pic of 17-year-old her in glasses, thank you very much — and there was conversation earlier in the week over who was the better player: the teen phenom, or the 25-year-old who lost her way for a bit, but is now world No. 2.

Good stuff. Is she right? Who’s to say? Jump ahead a few years, to 2015 and 2016, and Ko won a whopping nine times, including two majors. This year, she’s won three times. And you should take all of that into your own guess.

This, too. The exchange is lengthy, but Ko is an excellent storyteller, and there is outstandingly a point.

“I’m just curious, when you look back to that girl that year in 2014 maybe versus the woman you are now, how do you compare?” a reporter asked Sunday.

“Yeah, I think that week I actually flew from Mexico because we had Lorena’s [Ochoa] event the week prior,” Ko began. “I was coming into the week a little tired, and I remember I didn’t play that great. So that year was the first time that we had the million dollar for the Globe outside of the event. I think if you were a top nine coming into the race that you had the opportunity to win the Globe if you won the event. I ended up doing that.

“I think I played extra holes that day, and I was in the playoff with Carlota [Ciganda] and Julieta [Granada], and all three of us were very different style of players. I think there was a moment in the playoff where I actually thought I had lost because Carlota had hit a really close shot in there, but obviously she ended up missing the putt.

“You know, a lot of things have happened since then. I was 17 in 2014. I don’t feel 25 right now. There’s been a lot of ups and downs both on and off the golf course, but all of those moments have made moments like today. I think, yes, maybe when I was younger, I played maybe a little bit more freely because I was a little clueless at the same time.

“But now, you know, I’ve gone through my share of ups and downs, and I think that’s helped me to realize that, hey, we’re going to have good days and we’re also going to have bad days. I think my perspective on how I treat the bad shots or the bad events is a lot better now than I did then.

“I hope that I’ve grown more as an individual since then, and I think golf is very relatable to life in general, and I think golf keeps you very humble as well. It’s a continuous learning journey, but I’m excited with where I am at in life and at the golf course. But, you know, I don’t miss the times of wearing the glasses and having to clean my lenses too. Yeah.”

At this point, Ko laughed. And remember, all of that above came after 72 holes at the tournament with the richest prize in LPGA history. Let’s continue.

“Just as a follow-up,” a reporter said, “so would you say you kind of recaptured the same kind of freedom that you were playing with back then, just in a different way?”

“Then sometimes I don’t think it’s going to go great, and it goes great. So I think just all those kind of experiences help me to become more free because at the end of the day, it’s like a gamble. Yes, you kind of want that to go in your favor, but I can’t — like, just because I become more controlling, it’s not going to do any good for me.

“So I think just to let go, and I’ve said all year, you know, what’s meant to be is going to be. I want that to be, like, how I envision, but at the same time, I’m playing alongside the world’s best female golfers, and I know it’s not easy, so I just have got to focus on me. And if I do a good job of what I have in front of me, then that’s all I can really ask for.”

All of this is not to say this version of Ko is firing at flags and ramming putts 6 feet past. She’s still calculated. But you learn things.

Like the playbook for when your ball goes a little too far right.

In short, Ko’s 14th on Sunday was surgical. Precise. No nerves. She fixed the damage, with nary a scar.

After finding her ball in an unplayable spot, she dropped, hit her fourth shot to about 30 feet and two-putted for a bogey. Maguire bogeyed too, and Ko’s advantage held at one.

After Ko parred 18, that’s how the leaderboard read at the end. She’ll head into next year a winner.

And now we look ahead. We’ll do so with a question.

What would happen if one of golf’s best-ever players became unafraid to take risks, because she can recover from whatever consequence?

While you think of the answer, we’ll end things with this line from Pressel, after Ko’s birdie on 16.

“Look at how stoic and calm and settled she looks. Like, yup, that’s what I’m supposed to do.”