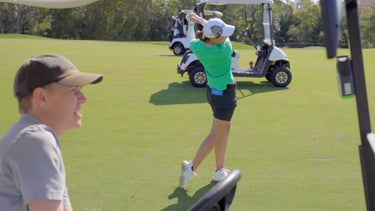 With the Aramco Team Series visiting New York City this week have come questions about the future of the women’s pro game.

With the Aramco Team Series visiting New York City this week have come questions about the future of the women’s pro game.

THE BRONX, N.Y. — If, say, three decades ago you had told a focus group of native New Yorkers — cynics by nature — that a field of elite professional golfers would be playing a $1 million tournament in 2022 on a Scottish-links-style golf course in the shadows of the Whitestone Bridge designed by Jack Nicklaus and operated by a company owned by former U.S. President Donald J. Trump, you would have gotten some strange looks, and maybe even a few cries of fuggedaboutit.

But here we are, folks: big-time pro golf is in the Big Apple, and checking all the aforementioned boxes. This week, the Aramco Team Series is underway just eight miles east of Yankee Stadium, representing the first-ever professional golf tournament of this scale to be conducted in one of the five boroughs. The event — which is sanctioned by the Ladies European Tour and has in its field six of the top 20 women players in the world — is part of a five-tournament circuit with stops in Bangkok; London; Sotograde, Spain; New York City; and Jeddah, Saudi Arabia.

A year ago, in the series’ debut season, the New York event went to Glen Oaks, a private, old-timey enclave out on Long Island. But this year it has migrated to a New York City-owned public course on the site of a former landfill: the fescue-lined engineering marvel known as Trump Golf Links at Ferry Point.

Many New Yorkers are familiar with Ferry Point, not only for its impressive skyline views but also for the controversy it has been stirring up almost since its inception more than 20 years ago. The course was first green-lighted in 2000 by then-Mayor Rudolph Giuliani, with the goal of opening in 2003. But the project was beset with environmental setbacks and a ballooning budget. After years of mismanagement, the city, in 2012, awarded a 20-year license to the Trump Organization to operate the property. The course opened three years later.

Last year, the city’s deal with Trump got complicated. In the wake of the Jan. 6 insurrection, Trump’s connection to Ferry Point became a flash point for many New Yorkers, leading then-Mayor Bill DeBlasio to terminate the Trump Organization’s contract on the grounds that Trump’s role in the Capitol siege would prevent the course from being able to attract and operate tournaments. The stoppage didn’t last. Earlier this year, a judge returned the contract to Trump, ruling that its fine print did not explicitly require his organization “to run a golf course that must be capable of attracting professional tournament-quality events.”

Which brings us to this week.

Stroll the grounds at Ferry Point, on a windblown spit of land hard against the East River, and you’ll see many signs of a “professional tournament-quality event”: Brooke Henderson, Lexi Thompson and the Korda sisters bashing balls down ambling fairways; a hulking hospitality complex looming by the 18th green; cameras, reflectors and boom mics; a hangout area for fans with picnic tables, bean bags and three netted hitting bays. The mounds flanking the fairways make for excellent vantage points, and with few fans on property, sightlines are unimpeded. It’s a good place to watch good golf.

The event’s novel format is another enticing wrinkle, with the pros concurrently playing in a 54-hole stroke-play event (with a first prize of $75,000) and 36-hole team event ($105,000 divided three ways); each team — there are 28 in the field this week — has three pros and an amateur, with only the two best scores from each squad counting on each hole. The simultaneous competitions create a delicious dynamic in which players find themselves pulling for 36-hole teammates who also are their 54-hole opponents.

“You have a lot going on out there but, honestly, I’m rooting for my team,” said LPGA pro Annie Park, a native of Long Island who played in the Solheim Cup in 2019. “I’m rooting for birdies out there. I feel great when they are playing great. I feel for them when I’m struggling, too.”

Added Thompson, who is playing on a team with former NFL receiver Brice Butler: “Golf needs a few more team events just to change it up a little bit, but to also have an amateur by your side and give them a little insight of what we go through out here and how we prep and how competitive it is.”

The times, they are a-changin’ in professional golf, and we’re, of course, referring to more than just tournament formats. This week’s event at Ferry Point is funded by Aramco, an immensely profitable Saudi Arabian petroleum and natural gas company; the tournament’s presenting sponsor is Saudi Arabia’s deep-pocketed Public Investment Fund, or PIF. The latter likely will be familiar to golf fans, because it’s the backer for LIV Golf, the upstart men’s tour that in recent months has lured away many of the best players from the PGA Tour and beyond. Branding for both Aramco and PIF is all over the property this week.

Unless you’ve been living under a ball marker, you’re aware of the moral-minded questions many of LIV’s recruits have faced about signing with the new tour. Similar queries were posed to at least a couple of the players at Ferry Point this week, including one about the pressure some local politicians applied to New York City Mayor Eric Adams to cancel the event out of respect for 9/11 families.

Korda and Thompson also were asked about the prospect of LIV and the LPGA forging some sort of partnership, in the wake of LIV commissioner Greg Norman saying his organization has internally discussed the possibility of forming a women’s league. Asked about those remarks in July, LPGA commissioner Mollie Marcoux Samaan said that she would, under the right circumstances, be willing to “engage” in a conversation with LIV. “It’s my responsibility to evaluate every opportunity,” she said.

Would Korda and Thompson be amenable to a LIV women’s league?

“Exactly,” Thompson said. “All we are doing is focusing on the LPGA Tour and what we are playing. No opportunities have been brought upon us or the Tour, so I know Mollie said that she would have conversations but that’s not in our control. We are just doing what we can on our tour.”

Added Korda: ”And that has not been brought up to us as players. I think that’s very much internal.”

It should be noted here that while the women’s majors have seen huge purse increases this year — the Women’s U.S. Open nearly doubled its purse to $10 million, while the KMPG Women’s PGA’s pot swelled from $4.5 million to $9 million — making a living in the women’s game remains tough sledding. This season on the LPGA, only 20 players have made more than a $1 million in tournament earnings and no one outside the top 70 has made more than $300,000. Take out travel and staff costs, and that doesn’t leave much. On the Ladies European Tour last year, no player made a million dollars and only the top 18 players on the money list banked six figures.

So, should a new opportunity come along promising princely payouts, the temptation no doubt would be strong. As Cristie Kerr told Golfweek’s Beth Ann Nichols in June, when asked about who might jump ship for a league offering more lucrative pay: “Put it this way, I think you would see almost the entire tour do it. What we play for here compared to the men’s Tour, the scale is different.”

Just as has been the case in the men’s game, though, embracing a shiny new opportunity could also mean leaving good things behind. Dottie Pepper, who won 17 times on the LPGA and is now an analyst for CBS Golf, says whatever doors might open for players in the future, she’s hopeful that they see the full picture before making any decisions.

As long shadows extended across Ferry Point on an idyllic Friday evening, pros and amateurs gathered by the clubhouse for cocktails and photo-ops. The vibe was chill, and so it was on the course, too, where a few players were still finishing up, including Laura Davies, who pulled out her phone to snap the Whitestone. Out on the range, which is wedged between the 9th and 10th holes, a lone golfer was banging balls, Sanna Nuutinen, a 31-year-old pro from Finland. Nuutinen, a red Wilson staff bag beside her and a TrackMan unit behind her, was displeased with the contact she was making with her fairway wood. Her caddie was offering counsel.

“I’m feel like I’m not compressing it,” she said.

“Are you not compressing it, or maybe that’s a bit more of a heely strike,” the caddie said.

They kept at it, launching ball after ball into the cool still air.

Some things in golf are changing. Others never will.