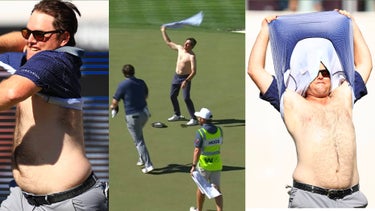 Harry Higgs, one of golf’s more popular pros, opened up on his lengthy spiral following his play at the Bermuda Championship.

Harry Higgs, one of golf’s more popular pros, opened up on his lengthy spiral following his play at the Bermuda Championship.

Kailee Kuehn’s birthday was Thursday. And if you’re wondering about her boyfriend, here’s how he broke up, mid-thought, a plunge into how he’s fallen off the golf map.

“I would be remiss if I didn’t — my girlfriend’s 30th birthday is today, too, so we just spent two and a half minutes trying to dive deep and it’s probably because it’s her 30th birthday and I’m missing it is why I shot seven-under and I didn’t make a bogey today,” Harry Higgs said. “We’ll give her all the praise.”

You know Higgs, maybe in more ways than one. He’s the shirt guy. And the shirtless guy. Higgs goes for the deeeeep V with his polo buttons, though we saw more than a peek of chest back in February, when, after a talk with friend and fellow pro Joel Dahmen, he flipped his top over his head, to the delight of the raucous 16th hole at the Waste Management Open. He’s the fun guy. Of course, there’s more.

Higgs can swing it. He’s won on the Korn Ferry and Latinoamerica tours. He tied for fourth at ‘21 PGA Championship. Two months after the flash, he tied for 14th at the Masters. But you can tell by the tone here where things are going.

Though even he can’t figure out exactly how he went from that finish at Augusta, to missing 10 out of his next 14 cuts. He lost his Tour card, too.

“Yeah, I legitimately have not played good golf since the Masters in April, and Lord knows why,” Higgs said.

He’s not without his theories, though, and on Thursday, after an encouraging seven-under 64 during the Bermuda Championship first round, he opened up on it all. A day later, Higgs shot a 75 and missed the weekend cut, but you could be right in thinking bottom may have already been hit.

Physically, Higgs says he has a left miss, but if he’s being honest, this is a mental thing. It’s layered, though.

“Well, actually, one of the definites is I was way too hard on myself,” Higgs said. “Still wasn’t playing my best, but just had a poor enough attitude that, you know, with making the cut by a shot or two and then having a chance to get better over the weekend to kind of break out of the slump, I just didn’t have a good enough attitude to — it would cost me a shot or two and I’d miss out by one or two. and then the last couple months I wasn’t really even close. So today was nice to see successful golf shots, kind of not be shocked when I look up like, oh, wow the ball’s nowhere near where I was thinking.

“No, none of us think that [not playing well after the Masters]. You’re riding real high, especially after playing great in a major. None of us ever think that that’s going to stop. But kind of also throughout my career, I’ve had a little bit of a difficult time dealing with successes. Like if you go back and see kind of some of my best results, usually follow with some poor ones and then I shake myself out of it a lot sooner than I have done up until this point.

“So just ever learning, ever trying to figure out how to deal with success. Also figure out how to deal with failure. I’ve been home on a lot of weekends since April and that’s just not any fun, it really isn’t. You complain, you’re tired, we’re on the road a lot. Well, I really wasn’t on the road a whole lot; I was there for four or five days and then back home, regroup.

“I certainly worked my tail off to try to get out of it, and I’m looking forward to testing it.”

A reporter then asked: “Why do you feel like you’ve had struggles dealing with success, successes?”

“I have had — I guess you just kind of relax in a way,” he said. “Not relax in it like I don’t put the same amount of work in, it’s just kind of relax and assume that I played great last week, I’m going to play great again this week. And I do all the same things, but in a way I do them a bit more unfocused, a bit more in like the going through the motions phase. I mean, we all get caught doing that obviously. It’s obviously a very long year; we play a lot of golf tournaments. You literally do the same thing. You wake up and do the same thing every day pretty much. The only days that are different are Thursday to Sunday because you actually go out on the golf course and play golf with a scorecard in your back pocket, but everything else is so similar.

“Also, just inherently I’m trying to focus a bit more as I’m just going through the motions, right? I’ll go have some lunch and I’ll go to the driving range and try to accomplish something with some focus. Then I will go home and probably take a nap and Lord knows what else after that.

“But yeah, in a long-winded way to say it, you get going through the motions and you kind of feel like, OK. I’ve had some great weeks in some really big tournaments as well, so you start to think, well, shoot, compare the PGA finish from a couple years ago and then I show up to Colonial the week after, it’s like well, of course I’m going to play good. Then you don’t.

“And then I got a little angry for just a brief second, but after that it was pretty easy, but it was also pretty easy because I was doing good. I got to do a good job of not allowing myself to anger and get kind of down on myself when I make a bogey. I would like to not make a bogey for the rest of the week, but the chances are that I will make at least one bogey. …

At this point, the interview was nearing its end, and the introspection was deep, along with potential solutions. Whether Higgs finds his way back, or the spiral is extended, is unknown.

But the conversation ended this way.