LIV Golf’s debut is complete. Where does it go from here? 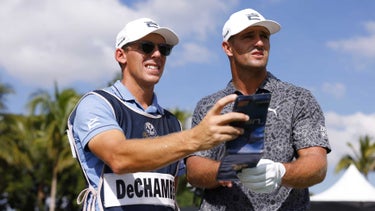 LIV Golf’s final act was an exciting team championship in Miami. But everything about last week was leading toward more in 2023.

LIV Golf’s final act was an exciting team championship in Miami. But everything about last week was leading toward more in 2023.

DORAL, Fla. — After Cam Smith’s charge and Dustin Johnson’s final putt and Paulina Gretzky’s congratulatory kiss, Eric Trump’s fist-pump, his father’s pro-am appearance, champagne showers and Greg Norman saluting a sycophantic crowd — after all that, EDM band The Chainsmokers leapt on stage for a concert. If some is good, LIV Golf wants to feed you more.

Bryson DeChambeau took it all in, with a skull-and-crossbones-style logo across his chest and a backwards LIV hat on his head. DeChambeau and a couple pals mingled among LIV VIPs Sunday evening as the sun began to set on LIV’s first season. It was a group exhale with hugs and kisses, thanks and promises. Halfway through the first song on the set list, DeChambeau whipped around with a knowing smile and offered a rhetorical question for me and the rest of the golf world:

“Think this thing is going anywhere?”

DeChambeau was plenty convinced by the day’s events, and you couldn’t blame him. A room full of writers couldn’t script a more compelling result for LIV Golf at its team championship and 2022 finale. The two best golfers in the entire series were the last two on the course, their teams separated by a single stroke. Smith had accidentally fired his approach shot into the crowd, inciting a wicked mingling among VIPs and over-served spectators.

Among the notables wedged in tight by security were Eric Trump, who was rooted on by most and asked for selfies and his thoughts on Nancy Pelosi. Norman himself helped police officers usher fans into place. Gretzky retreated to escape the melee if only for a moment as the horde inched closer to the 18th green. There was only three feet left for Dustin Johnson but it may have been the most anticipated golf shot of LIV Golf’s entire season. When he made it, he guaranteed $4 million for himself and each of his teammates, bringing his own total to $35 million in the five months since he resigned his PGA Tour status and joined the rebel circuit. He was doused with champagne twice Sunday evening, the second of which sent Brooks Koepka running for shelter.

With the smell of Ferrari Jeroboam hanging in the air, Atul Khosla, LIV’s chief operating officer, scarfed down a slice of pizza while similarly enjoying the atmosphere of his creation. Meat-lovers and Margherita-mushroom had been ordered in for LIV staff, players, family and friends. “Can you sell this?” I asked him as he turned to leave. “Absolutely,” he said. “But first I had to show the world what it’s all about.”

After eight events in five months, it should be pretty clear what LIV Golf is all about. It is a league backed entirely by the Public Investment Fund of Saudi Arabia. It’s a plaintiff and counter-defendant in a major antitrust lawsuit against the PGA Tour. It has paid huge sums of money to pluck some of the best golfers in the world as well as some of the best young talent on the planet. It does not have Tiger Woods’ support but it has all of Phil Mickelson’s. It has reiterated good intentions for entering the global golf ecosystem, but that hasn’t totally manifested in reality. Its entire first season was streamed on YouTube to disappointing viewership numbers, depending on your analyst for that information. It’s been available on television in other countries around the world — ask your analyst for the value of that, too. It has staunch support in some corners of the internet and even stronger detractors in others. But now it’s even more clear — it is not going away.

As LIV executives explained Saturday morning to the press, LIV will begin its 14-event schedule in February, hoping to file in gingerly around the major championships and “heritage events” on the PGA Tour. Its operating purpose for the next three months is to commercialize its teams, even if your Saturday foursome doesn’t know exactly who is playing for the Niblicks. LIV dreams of a day where each team is sponsored, with its own operating budgets and staff. Making a Torque GC Instagram account is one thing. Convincing a Fortune 500 company of team valuations is another.

But as DeChambeau said confidently Sunday night, “We’re going to sell it to whoever wants it.”

“If they’re not somewhat interested by now, they’re probably not going to be,” I reasoned.

His words speak to the growing divide in the men’s pro game that Rory McIlroy recently labeled “us vs. them.” Whether LIV is “us” or LIV is “them,” it has plenty of work to do to achieve the goals it discussed. And to be fair, it has always had plenty of work to do since its inception exactly 12 months ago. It’s Khosla’s job over the next three months to entice a brand to want to sponsor LIV Golf and its teams. To convince fans that their product is worth seeking out. To persuade a television network to either pay for LIV rights or, in a worse case, accept money and allow LIV on its air. “We have got to start commercializing the product. We have got to get on TV, we have to get corporate partners. These are milestones that we need to hit,” Khosla said.

The television rights are an issue on which the success of the entire enterprise seems to hinge. The PGA Tour’s extremely different-but-similar product currently has TV rights deal worth about $700 million that runs through 2030. On Sunday, LIV delivered a peak of 72,000 live viewers via its YouTube stream. About 30 minutes after that, DeChambeau guaranteed LIV would have a TV deal by February.

What fans found at LIV Miami what exactly what we’ve come to recognize from the breakaway tour. On Day 1, spectators were greeted by a lady on stilts in a hot pink, bedazzled uniform wearing a flamingo hat and blowing bubbles into the air. Twenty yards away a unicyclist wove through the crowd juggling bowling pins, nearly crashing when one hit the pavement. There’s a reason why some people call LIV Golf a circus. In some ways it is so different than the pro golf we’ve known that you stop to look around and wonder where you really are. But then a pro golfer and his caddie walk by to remind us of the sports event we’re attending.

Rather than a tense weekend filled with smack talk, what played out at Doral was something more akin to golf camp. Many players stayed on-site at the lavish resort on the edge of Miami. If you were too, you’d see Anirban Lahiri and his family walking to breakfast. You’d pass Louis Oosthuizen in his flip-flops or run into Sergio Garcia in the Sam Snead Villa. When four of the 12 teams had first-round byes, they played practice rounds together at the other course on campus. Each opponent selection show was a cozy affair between friends that mostly resulted in laughter. Teams that lost hung around all weekend to watch. Joaquin Niemann’s season ended Friday but he received a haircut from Cam Smith Sunday morning in front of dozens of fans. LIV golfers are by no means rivaling each other, and when asked about how tension between teams could be created, the four remaining captains Saturday night could barely muster up an example.

“I mean, yeah, it all depends,” said Brooks Koepka, a man of many perceived rivalries. “I think the way this team format is set up here this week, if you’re picked, I think it could start something. But yeah, I think obviously there’s also like little rivalries kind of going on anyway. Sometimes it’s player-to-player and it could be team-to-team, so you never know.”

The group of players — through suspension, accusations of sportswashing or general unfaithfulness to the PGA Tour — have bonded together to the point that no LIV golfer ever seems unhappy. That’s the millions of dollars at work, removing strife from the typical pro golf equation. LIV staff seems to view that as a good thing — life being all good, all the time is a nice recruiting technique — but golf fans may think otherwise. There are no cuts in LIV’s stroke-play events. Everyone is paid handsomely, and in some cases grotesquely. What LIV may have found out this week is that part of what makes sport intriguing to the fans at home is that the winning team takes the prize and the losing team doesn’t. At LIV Golf, there are grand prizes and first prizes and silver prizes and consolation prizes. James Piot played 15 holes of competitive golf this week and earned $250,000. During the celebration that followed Sunday night, three of the four teams were invited on stage. Everyone gets a champagne bottle to chug, spray or spill.

“We have to [have more team events],” DeChambeau said, offering that, at the very least, LIV’s 2023 should include a tournament that begins with stroke play and finishes with match play. Sunday was too much of a sign.

DeChambeau is one of the “principal players” who will own or split a 25% equity stake in franchises beginning next year. His team will still be the Crushers but they’ll have a new colorwave when the curtains lift in 2023. In the meantime, he said, he may play in a couple international events to keep his game orderly, but is looking forward to a break. Harold Varner isn’t looking for a break — “If they gave us 20 events, I’d play all 20” — but is ready to go hunting and attend Eastern Carolina football games. Dustin Johnson? He’ll be fishing. Sergio Garcia has knee surgery on the docket. Cam Smith is headed home to play in Australia. This is what so many LIV golfers swore they wanted — actual time off.