LIV Golf’s $50 million team championship is here. This is what it looks like 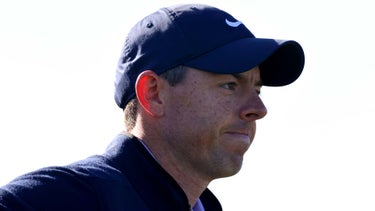 LIV Golf’s first team championship kicked off Wednesday morning in Miami. Here’s what it looks like in person.

LIV Golf’s first team championship kicked off Wednesday morning in Miami. Here’s what it looks like in person.

DORAL, Fla. — If there were any lingering questions about Phil Mickelson’s comfort as LIV Golf’s leading entertainer, he answered them early Wednesday morning at its team championship. It wasn’t his turn, but the man making more money than anyone joining the tour made a point to be the first to speak.

“Woah, woah, woah, woah,” Mickelson began, interrupting Brooks Koepka in an effort to coax him into selecting Mickelson as an opponent. Phil happily reminded the room of about 150 that he beat Koepka at the 2021 PGA Championship.

Koepka quickly shot back a barb of his own, chiding Mickelson for never reaching World No. 1. Mickelson then complimented Koepka’s sea foam green shirt, asking if he had ever won a green jacket. Whether or not the lines were scripted, nearly every LIV captain came in armed with purpose and humor. They wanted to inject energy into the proceedings.

About 10 feet and two fellow LIV captains (Ian Poulter and Kevin Na) separated Koepka and Mickelson in the eight-player press conference. From the other end of the dais, Bubba Watson chimed in that he, too, has a green jacket. Koepka chose to face off with Watson’s team in Friday’s opening matches and finally had a chance to explain: “Booba [Koepka’s chosen nickname] has been calling me the wrong name all year — Bruce — so I felt like it was a good opportunity to get back at him.”

Thus went most of the next half-hour — playful but ultimately uninspiring trash talk between the captains and their teammates. Like much of LIV’s first summer, some of this show was quite entertaining. Harold Varner III sat in the front row alongside media members and shouted out how Koepka has “beaten [his] ass” every time they’ve faced off.

Koepka, Poulter, Joaquin Niemann all made their opponent selections, leaving Mickelson facing Cameron Smith’s team and Mickelson himself destined for a lopsided singles match against Smith.

“This sucks, right?” Mickelson said. “I mean, I don’t like the way this all worked out.

“Look at Cam smile. Look how happy he is. This didn’t really work out the way we had planned at all.”

The 37-minute press conference was as jovial as anything we’ve seen from LIV golfers during this turbulent summer, a far cry from the discourse dominated by the league’s connection to Saudi Arabia, its conflict against the PGA Tour, the towering sums of money guaranteed to players and what it all means for, say, future Ryder Cups.

But if Mickelson’s performance Wednesday was any indication, LIV golfers are desperate to keep the attention on the team championship, a first-of-its-kind professional event. They have spent months defending LIV Golf’s team aspect, which some argued has reinvigorated their careers. Wednesday was a prime opportunity to double down on it. So when Mickelson was asked to readdress comments he made in recent weeks — that LIV Golf was trending up and the PGA Tour was trending down — he backtracked a bit.

“Maybe I shouldn’t have said stuff like that, I don’t know,” Mickelson said. “But if I’m just looking at LIV Golf and where we are today to where we were six, seven months ago when people were saying this is ‘dead in the water’ … It’s pretty remarkable how far LIV Golf has come in the last six, seven months. I don’t think anybody can disagree with that.”

Mickelson’s description was met by applause from the back of the room, where about 50 LIV staffers had congregated to watch their work come to fruition. It was a different reminder of how LIV Golf has changed. Four months after the first press conference of his LIV Golf career involved dozens of thorny questions in a contentious media center outside London, Wednesday’s decidedly friendlier affair took place in the luxurious Ivanka Trump Ballroom at Trump National Doral. About 100 yards away from the conference room is a resort building literally named the Phil Mickelson Villa. Mickelson won here during the PGA Tour’s 45-year stretch on the property. It’s familiar territory.

This week’s season finale has been propped up by an incredible, $50 million purse. Just don’t confuse it with a win-or-go-home competition. When Joaquin Niemann contacted Adrian Otaegui asking him to join his Torque GC team for the championship — Otaegui played the first two LIV events but hasn’t competed on the tour since — it was an invite to make a lot of money. Perhaps as much as $4 million. You can find some obvious strategy in Niemann’s decision, if you look hard enough. (Otaegui won on the DP World Tour 10 days ago.)

The entire summer has been defined by LIV Golf’s upstart existence, its gaudy promises and its legal demands. But its first seven events have fallen in place somewhere short of its goals. The 48-player invitationals have been a slightly different version of pro golf as we already knew it: stroke play events featuring some of the best golfers in the world. LIV has long boasted about its team event as something no other tour in the world has. They’re correct about that.

The remaining question now is, will it all live up to the hype? Some of the first promotional material created for LIV Golf promised rivalry would be created among the 12 franchises, like in other sports. But in the process of landing so bluntly onto the surface of pro golf, LIV created the opposite — a band of brothers who back each other in person, to the press and on social media. It’s been exactly what Rory McIlroy said recently: Us vs. Them. Wednesday’s ballroom was flanked by non-captain members fraternizing together just like they’ve done all summer. When it concluded, the group piled out into the hallway and headed for the course, where the teams finally split into their own groups. Clenched fists there were not. At least not yet.