Lee Trevino taught an 11-year-old how to con, and it’s everything 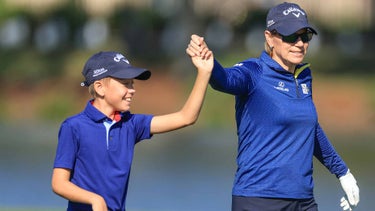 Lee Trevino taught Annika Sorenstam’s 11-year-old son how to con at the PNC Championship, and his legend grows.

Lee Trevino taught Annika Sorenstam’s 11-year-old son how to con at the PNC Championship, and his legend grows.

Will McGee stole our hearts.

Lee Trevino taught him how to steal money.

And the PNC Championship, even a week later, is the gift that keeps on giving.

You remember McGee, right? The 11-year-old son of legend Annika Sorenstam had moment after moment at the PNC, the good-vibes event that pairs 20 major winners with a family member in a scramble format. McGee walked in putts; a week ago, during the event’s first round, he rolled in a 15-footer for birdie, and young blood had his putter raised and his feet moving after three yards. McGee was magic on the mic, too, as GOLF’s Jack Hirsh recounted in a column last Sunday.

“Do you realize how great your mother was when she was the best player in the world?” NBC’s Steve Sands asked Will in a post-round interview.

Sands laughed and then asked Will what it was like to play alongside his mom.

“She hasn’t played in a long time, and she still has a solid game,” he said.

Good stuff. And, of course, you remember Trevino. Six-time major winner. One of the best ball-strikers ever. The 83-year-old can also stack together words in fun and creative ways, though in the pro-am ahead of the PNC, he tugged at our heart strings. Steve Sands caught up to him, too, asked him what motivates him to still play every day, and his answer was gold.

“Well, I tell you what, this game of golf, I never had a choice, as you well know,” Trevino began on Golf Channel. “When I was a young man with my educational background, this is the only thing that I could do and do well. And um, the good lord gave me a tremendous amount of talent, and I don’t want to disappoint Him when I see Him, number one.

“Number two, I have no other options; I can’t do anything else. So I love doing it. I can look for balls — [laughs] — and do that stuff. But I love it, I do. I go out every day; I hit balls for an hour, maybe two, chip, putt, do whatever. I don’t play much anymore. I go out to Bighorn, as you well know, in Palm Springs and play a lot of golf out there, but mostly I stay around the house, yeah. Love the game. Still love it. Can’t play it nearly as well, but I love it.”

The exchange appears to have come on Saturday near a practice green at the Ritz-Carlton Golf Club. McGee was hitting pitches, Trevino walked up and someone wise on the Golf Channel’s social media team hit record, then shared the video a few days ago.

It’s here where we must note that McGee’s a lefty. That’s important.

“The thing that you’ve got to do, is when you’ve got to get a bet with your friends, just tell them, you say, ‘OK, I’m going to chip you for quarters, but you have to use my club,” Trevino said in the video. “And they don’t know you’re left-handed, see?”