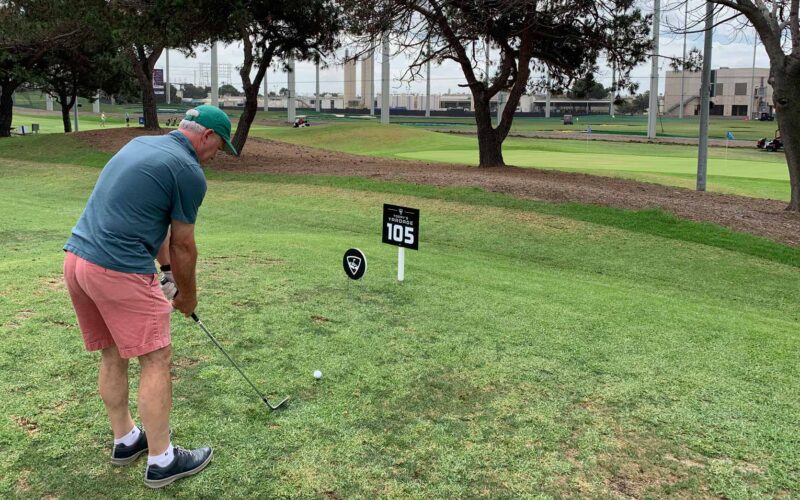 Topgolf and traditional golf can co-exist. That’s the vision at The Lakes at El Segundo, the physical expression of a larger convergence.

Topgolf and traditional golf can co-exist. That’s the vision at The Lakes at El Segundo, the physical expression of a larger convergence.

A lot of munis are laidback. Not many manage to be this mellow.

It’s a sunny afternoon at the Lakes at El Segundo, in Los Angeles County, and a newbie to the game named Andrew Prahlow is hunting for his ball.

Golf is hard. For every shot that he gets airborne, Prahlow scuffs another. His play begs forgiveness.

As he searches in the pine straw, Prahlow shuffles past a sign that offers exactly that.

As local rules go, this is lenient. And perfectly on-brand. It captures the easy-going ethos of the Lakes, the only course in the country maintained and operated by Topgolf.

Yes, that Topgolf, the outfit better known for its tricked-out driving ranges, with the targets and the tracers and the cocktails and the tunes. Golf gamified and cranked to 11.

In the mid-aughts, when the British-born company took root on U.S. soil, few industry insiders paid Topgolf any mind. To the game’s old guard, the whiz-bang venues were outlier entertainment. There was golf and there was Topgolf, the thinking went, and they were not at all the same.

Fast-forward to the present. The two have drifted closer on the winds of change.

Even as Topgolf has evolved and expanded, stretching its reach with golf-themed products ranging from indoor swing suites to shot-tracing features on tournament broadcasts, the golf establishment has gravitated toward it. Topgolf is now owned by Callaway, and its innovative spirit has moved from the margins to the mainstream. Witness the explosion of short courses, simulators and virtual golf games, among other golf-adjacent diversions. Alt-golf is all the rage. In 2020, according to a National Golf Foundation survey, more than 12 million people experienced the game at an ‘off-course’ venue, in the same ballpark as the number of people who smacked shots on an actual first tee.

Not all Topgolfers are golfers, or the other way around. But the data suggests a growing overlap in the demographics.

The Lakes at El Segundo is the physical expression of a larger convergence, a beginner-friendly gateway into golf, with high-tech and tradition standing side by side.

The origins of the project date back about a decade, when Topgolf struck up conversations with officials in El Segundo, a coastal city bordered by Los Angeles International Airport and Manhattan Beach.

The Lakes at the time was like a lot of munis: beloved by many but struggling, anyway.

Cities being cities and business being business, negotiations were protracted. But in early 2021, Topgolf assumed the lease and embarked on renovations. This past April, work was completed, and two venues opened in one swoop: a triple-decker Topgolf facility, with all the latest technological trappings, and a reborn muni, right next door.

Under the direction of the architect Mike Angus, what had been a 9-hole course with two par-4s morphed into a 10-hole par-3 track, with a host of upgrades and contemporary add-ons. The Lakes has a new pro shop with a restaurant and a bar, plus a new short-game practice area with multiple greens. It also has lights, allowing for pre-dawn and after-dark rounds, and outdoor speakers that pump playlists as you play. But no touch is more Topgolf-y than the extra on the 10th hole, which features a Toptracer on the tee. You can opt out if that feels like too much pressure. But otherwise, the arc of your shot and assorted stats show up in real time on a tee-side screen, just as they do for Tour pros on TV.

“Just FYI,” a billboard in the backdrop blurts. “Everyone is watching.” Technically, that’s not true, but it kinda feels that way.

In the six months since they opened, both El Segundo venues have been going gangbusters, especially on weekends. Though Topgolf declines to share information on profits or rounds played, the joint facilities appear to be good business. According to report posted on the city of El Segundo’s official website, the municipality anticipates annual net revenues of more than $1.7 million.

For now, the Lakes is one-of-a-kind, which doesn’t mean that it will be a one-off. A lot needs to line up for a Topgolf muni project to make sense. Nor does Topgolf plan to shift its strategic focus into golf-course operations, which involves a learning curve nearly as steep as the one for golf itself.  But Topgolf CEO Artie Starrs says that the company is already exploring other similar opportunities, including another site in the greater LA area, where “we could bring our experience alongside the traditional green-grass experience.”

On this cloudless afternoon in El Segundo, there’s plenty of green grass in front of Andrew Prahlow.  He’s playing the 4th hole, a 130-yarder called Power Trip (“Do you see those giant power lines off in the distance?” the online course guide counsels. “Aim in that general direction.”)

A chill-pill approach works fine at the Lakes, which provides more leeway almost everywhere you turn. You still have to execute some challenging shots, just like you would at any course. But the landing areas are ample, there is little rough to speak of and the longest hole now tips out at 150 yards.

Prahlow is grateful for all of that. A musician and composer in his early 30s, he took up golf earlier this year and has logged only a handful of rounds. He has also whacked shots in the high-tech bays next door. But he prefers the fresh air and exercise and challenge of golf in its analog form. The Lakes is a Goldilocks match for him: neither boring nor brutal, provided he steers clear of the 3rd hole, which is partly guarded by a pond.

“First time I played it, I lost like six or seven balls in there,” Prahlow says. “So now I just skip it.”

There is no water on the 6th hole, a 90-yard downhiller where Prahlow has now arrived. Still, trouble in golf is wherever you find it. Prahlow swings. The result is not majestic. The ball skitters right and settles in the grass at the edge of a hardpan patch of dirt and leaves, where another sign is planted.

“Didn’t expect to hit it here? We offer lessons.”

Prahlow has been thinking of trying those, too.

This marks the return of our Muni Monday series, spotlighting stories from the world of city- and county-owned golf courses around the world. Got a muni story that needs telling? Send tips to Dylan Dethier or to munimondays@gmail.com and follow Muni Mondays on Instagram.