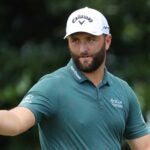 Jon Rahm on Friday during the second round of the Tour Championship.

The PGA Tour says its “top players” will play in 20 events starting next year.

But that sounds like news to one of the Tour’s top players.

“I wouldn’t be surprised if that changes, because that puts me in a difficult position,” Jon Rahm said Friday.

As part of its fight against the controversial, Saudi-backed LIV Golf Series, Tour commissioner Jay Monahan outlined Wednesday multiple changes to the league’s schedule and money, chief among them being that the Tour’s top 20 players had committed to play “at least” 20 events. But Rahm, the world’s sixth-ranked player, may have an issue, especially next year.

It centers on next year’s Ryder Cup. To qualify as a member of the European team, a golfer must play four DP World Tour events. And that, on top of the 20 Tour tournaments, would be a lot, Rahm said.

Speaking after his Tour Championship second round, here was his complete exchange:

Reporter: “The 20 elite events next year, the elevated events, the new schedule …”

Rahm: “Majors and Players and playoffs don’t really count, do they?”

Reporter: “Is that asking more of the European guys considering you have to play four for the Ryder Cup?”

Rahm: “If we have to play all those 20, then yeah, a 100 percent. I wouldn’t be surprised if that changes, because that puts me in a difficult position having to play — if I don’t play — if I go play in Europe in the fall like I’m going to — I have to play from January until August 20 times. I think this is my 17th from January, and I don’t think I could add any more. So yeah, especially with Ryder Cup and having to play four in Europe, yeah, I think it’s a bit of an ask, and I wouldn’t be surprised if they revise a bit of a rule or make an exception for some players.

“But if they do it for players like me and Rory [McIlroy], they might have to do it for everybody.”

Reporter: “Do you know something we don’t?”

Rahm: “Me? No. You’re asking the wrong guy. If you want to know about that stuff, you know who of the two players you have to ask.”

It was here where Rahm smiled. His reference to the two players was likely toward McIlroy and Tiger Woods, who last week organized a players-only meeting that likely talked about many of the changes announced Wednesday. McIlroy, in fact, mentioned the benefit of having top players play more often — a concept LIV Golf has, as it requires its golfers to play in all of its events (eight this year and 14 next year).

“Yeah, so I think I saw a stat yesterday that apart from the major championships and maybe the Players, the top 10 players, top 20 players in the world get together to play against each other one other time during the year, and that just doesn’t — I think if you’re trying to sell a product to TV and to sponsors and to try to get as many eyeballs on professional golf as possible, you need to at least let people know what they’re tuning in for,” McIlroy said Wednesday in his pre-Tour Championship press conference.

“When I tune into a Tampa Bay Buccaneers game, I expect to see Tom Brady throw a football. When I tune into a Formula 1 race, I expect to see Lewis Hamilton in a car. Sometimes what’s happened on the PGA Tour is we all act independently and we sort of have our own schedules, and that means that we never really get together all that often. I think what came out of the meeting last week and what Jay just was up here announcing is the fact that we’ve all made a commitment to get together more often to make the product more compelling.”

So will Rahm’s concern be addressed? Stay tuned. But one LIV golfer did note the issue on Saturday.

In response to a tweet that showed the video of Rahm’s press conference, Lee Westwood tweeted: “I’m sure this will be covered in the ‘strategic alliance ‘ Jon,” a reference to the relationship between the PGA Tour and the DP World Tour.

The exchange continued. The Twitter user who shared the video, @flushingitgolf, wrote in response: “It’s so strategic and so well balanced that the European Tour CEO has no influence in what the PGA Tour does, but the PGA Tour commissioner has a seat on the European Tour’s board… I’m sure all decisions are made in unison” — to which Westwood replied: “It’s worrying that 1 of Europes best players looks concerned as to how he’s going to fit in his quota of tournaments to enable him to be a member of both DPWT & PGA tour. I’m sure this subject was covered at the meeting in Delaware last week.”