Joel Dahmen shot Sunday’s best PGA Tour round. Then he took to the mic 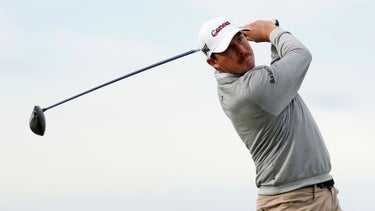 Joel Dahmen shot Sunday’s best PGA Tour round during the RSM Classic final round. But he was just getting warmed up.

Joel Dahmen shot Sunday’s best PGA Tour round during the RSM Classic final round. But he was just getting warmed up.

Christmas gifts and diapers. Idiocy. A mention of doing OK ‘socially,’ though not in reference to himself. And an interruption to yell something about margaritas. All in four minutes.

Joel Dahmen had himself a Sunday, and he played golf well, too.

But enough of our words. Here are Dahmen’s, after a 64, good for both the low during the RSM Classic’s final round, and a tie for fifth, his third-straight top 10. Pair all that with one of golf’s most friendly players, who has a Friendsgiving, a wedding, a trip to the Bahamas, and a baby on tap, along with the fact that the PGA Tour is putting its clubs into storage until January, and you get a little something like the following, all of which came during his post-round press conference.

“Is that going to make Thanksgiving dinner taste better?”

To note, Dahmen started Saturday’s third round one stroke out of the lead, then went out and carded just one birdie, against three bogeys and 14 pars.

“Yeah, I was pretty sour after yesterday,” Dahmen said. “It was nice to finish strong today. Yeah, I made the putt on 18, looked at Geno [Bonnalie, hs caddie], said Christmas presents for everyone. So it’ll pay for some diapers as well.”

“What was the key today?”

“Were you an idiot yesterday?”

“I was an idiot yesterday. I wasn’t patient on the first hole, and I hit it over the green and made bogey. And then after that, I was just like there’s like no more stupid mistakes today, don’t be super aggressive at some pins, there’s birdies out here, there’s plenty of them. So just kind of hung in there and played great on the back.”

“How often do you think you are an idiot over the course of a year?”

“Far too often, far too often for having a great caddie. I have to be a smarter player because I don’t hit it as far, and my ball-striking is really good. So I should be able to be more patient, and, at times, I’m not patient, which is just super frustrating. And like right after you hit it, you know that it’s not proper, so it’s frustrating.”

Later, there was one more question on the idiot subject. We’ll try to describe the response as best we can.

“Outside of being an idiot, is there anything else that kind of comes to your mind?”

“I improved chipping a ton this fall,” Dahmen said. “Finally, for years, we were — it literally just clicked. Like it’s not that hard, all the good chippers do it, it’s simple.”

He then turned back and to his left.

He then laughed again.

“Clarified margaritas,” he then shouted.

He then put his left hand on his chin and continued on about chipping and putting. We have nothing more to add.

Finally, the questions also touched on Seamus Power, whom Dahmen had played with two days earlier (and led to a post-round deep dive into his fears of Tour life).

“With Seamus, you talk about your affection for him, your friendship. I don’t know how much you’ve seen from him, but this fall what have you seen maybe in his game that’s led to success?”

“Yeah, he’s putting really nicely, and I don’t know if he always has,” Dahmen said. “We really haven’t played a ton together, just kind of passing each other. First time I’ve seen him. He’s always driven it really nice, but he made a lot of putts. And his chipping is solid, and I don’t know if that’s always necessarily been the case. When you’re riding a heater, you never leave the table as they say.”

“Seamus, you said you liked him the first time you played with him.”

“He’s just super happy, easy to talk to, nice guy. Some of his stories when he was single back in the day were phenomenal. You get a good-looking guy with an accent, he’s going to do OK.

“He’s just always been a nice guy, everyone likes him and easy to be around.”

With that, the press conference was over.