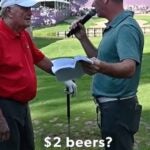 Jack Nicklaus on Saturday during a charity event as part of the PGA Tour Champions’ Ally Challenge.

Jack Nicklaus hit a shot on Saturday to win hundreds of folks $2 beers. He hazed Jalen Rose with just a dozen words.

No, the latter won’t replace any of the strokes that won him more majors than everyone, nor will the former bump any of his memorable lines. Saturday’s event was for charity, and these things have only fun at stake. Then again, hitting a shot to win hundreds of folks $2 beers and hazing Jalen Rose with just a dozen words aren’t tasks easily pulled off. And an 82-year-old legend is still getting it done. So let’s dig in.

To set things up, we should note first that the Golden Bear doesn’t play much these days. Though that doesn’t mean he doesn’t play well. Nicklaus said as much in June at the Memorial, the tournament he hosts.

“About two weeks ago, I took Jackie and J3, his son, and Charlie, who is one of his boys, up to Augusta,” he said. “I had prayed a scramble, an odd three or four holes here or there. But inflammation has been my problem, and most of the inflammation I seem for some reason to have gotten out of me. I said, OK, I can play with you guys.

“‘Really, you’re going to play with us?’ I said, yeah. So I played nine holes. He said, we’ll see you after. I said, what do you mean? I’m going to play the back nine. I whizzed it around and shot a slick 88 without a birdie, which I haven’t made birdie yet this year incidentally.

“But I enjoyed it. I said, well, I’m going to see if I can play again tomorrow. I played again the next day. Why am I playing? I don’t know. I’m tired of not playing, I think. I really love to play golf. I don’t enjoy playing golf the way I’ve been playing, that’s for sure. But when you start to feel a little bit better — I even hit a few shots that were pretty good on Sunday out here. I had a tee shot out at 17, I knocked it, what, 30 yards by those bunkers? …

“You know, I enjoyed it. I had a chance to shoot my age both days, and I choked.

“I don’t know why I’m playing. I’m going to continue to play. You’ve got to do something for crying out loud. I’ve been sitting around feeling sorry for myself because I haven’t been able to do anything. It’s time to get out and do something.”

Two months later, on Saturday, Nicklaus was playing again, as part of a charity event during the PGA Tour Champions’ Ally Challenge at Warwick Hills in Michigan. We’ll start with Rose and the jab. Rose, you may know, made his name as a member of college basketball’s Fab Five, and later as an NBA star. But that is not golf.

And an emcee gave Nicklaus a mic.

And Nicklaus said this:

“You see this thing here?” Nicklaus asked. “That’s what you hit the ball with.”

“That’s what you hit the ball with,” Nicklaus repeated.

From there, he told Rose to “swing it back, swing it through. Let the club do the work.” The two called for cheers. And Rose dribbled the ball forward on his next swing.

Nicklaus, as we’ve noted, also hit and knocked a few bucks off beers in the process. But all of this also brings to mind a Nicklaus story about the effects of booze on putting, told during the 2012 Honda Classic.

““I always felt drinking did not do well with nerves,” Golf Channel reported him as saying. “The guys today don’t do that. I never did that. Did I have a drink? Sure, here and there, but never while I was playing in tournaments. I always thought that was terrible for your nerves, and terrible for your touch, because I think the most important thing is to be totally there.”

Back to Nicklaus’ shot. Playing to the crowd, the emcee took to the mic.

“And, if Jack gets on the green, what did we decide? Two dollar beers?”

His ball hit the green.

The crowd had their cheaper beers.

“Can you repeat after me? Two-dollar beers!” the emcee said.