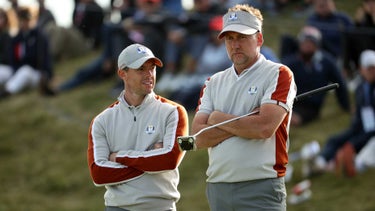 European LIV golfers’ eligibility for the Ryder Cup is up in the air while their DP World Tour suspensions are appealed in British court.

European LIV golfers’ eligibility for the Ryder Cup is up in the air while their DP World Tour suspensions are appealed in British court.

After the International Presidents Cup team was decimated by defections to LIV Golf, Jon Rahm is hoping to avoid the same fate for the European Ryder Cup team.

“The best of each against the other, and for me the Ryder Cup is above all. I wish they could play but it doesn’t look good,” Rahm told the UK Telegraph at this week’s Open de Espana in Madrid, where he leads after three rounds.

As it stands now, U.S. Ryder Cup hopefuls competing for LIV will be unable to participate in the biannual matches next year in Rome in line with the indefinite suspensions handed down by the PGA Tour.

The European team’s makeup is more up in the air.

LIV golfers are still able to play in DP World Tour events as a ruling on the suspensions initially handed down by CEO Keith Pelley makes its way through the British court system. The DP World Tour is the co-owner of the Ryder Cup along with the PGA of America, meaning the result of the court case could determine LIV golfers’ status for next year’s team. As of now, Lee Westwood, Ian Poulter and Sam Horsfield remain in the standings for European team qualification.

European Ryder Cup captain Luke Donald wasn’t asked specifically about LIV in a preview for the Ryder Cup last week in Italy, but he did acknowledge there’s an added element of uncertainty surrounding his team at Marco Simone.

“I really don’t know what my team is going to look like,” Donald said. “But I know, I’m assuming there will be some established players and some guys that are hungry, new, young players that want to make this team.”

If LIV players are allowed to continue playing DP World Tour events, they would still need to qualify for the team based on the European team’s point system, or earn one of Donald’s captain’s selections.

The qualifying system was changed for this year so players are unable to earn points from any tournament played against a Rolex Series event on the DP World Tour.

Last month’s Presidents Cup was wholly owned and operated by the PGA Tour, meaning suspensions given to LIV pros carried over to the matches. For the Internationals, that meant they were without the services of Open Championship winner Cam Smith, Joaquín Niemann, Abraham Ancer, Louis Oosthuizen, Marc Leishman and Anirban Lahiri at Quail Hollow.

Rahm, who himself reportedly turned down a lucrative offer from LIV Golf, said suspensions from either Tour shouldn’t have any bearing on the Ryder Cup.

“The Ryder Cup is not the PGA Tour and European Tour against LIV,” he said. “It’s Europe versus the U.S., period.”

Regardless of the outcome, one golfer, Rahm’s countryman and all-time leading Ryder Cup point scorer Sergio Garcia, seems to have pulled out of consideration for the Ryder Cup. Garcia has not played on the DP World Tour since withdrawing from the BMW PGA Championship last month and will be unable to play enough events to maintain his membership unless he plays this month’s Mallorca Open. He did not give a reason for his withdrawal at the BMW, and was later spotted at the Alabama-Texas football game that weekend.

“It is a complicated situation for Sergio,” Rahm said. “I understand that he decides not to play, because the last time he played a tournament on the European circuit he was not received very well, although I imagine it would be different in Mallorca. In any case, there are still days left and you can still sign up.”

Garcia is in the field for the sixth LIV Golf event this weekend in Thailand and presumably will also play in this month’s LIV Golf Invitational in Saudi Arabia.