‘It was a fight’: After battling life-threatening infection, Jeff Overton returns to Tour 5 years later 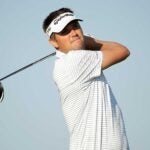 Jeff Overton, shown in 2017 (the last time he played on Tour), returned to pro golf on at the 3M Open on Thursday.

BLAINE, Minn. — Little wins are the gateway to big victories. Jeff Overton had a few of the former on Thursday at the 3M Open — his first PGA Tour start in over five years.

There was his opening tee shot at TPC Twin Cities, which came on the 10th hole at 9:02 a.m. local and proved, officially, that his comeback to PGA Tour play was complete. There was his second-hole birdie, a 12-footer he rolled in to put a circle on his card in tournament play for the first time in what had seemed like an eternity. There was the par-4 9th, his last of the day, when he made a 19-footer to save par after his approach found the sand.

There was also a brief moment at the turn, when his wife, Christina, and two girls — Paulina (3 years) and Valentina (8 months) — popped out to say hello. Paulina held her toy bunny and waved at her dad on the other side of the ropes.

“It was really the first time she had ever seen me in this environment,” Overton said. “That itself is a win. She’s such a little sweetheart.”

It wasn’t long ago when a day like Thursday was not guaranteed. When his oldest daughter was born, Overton thought there was a chance she’d never see him play competitive golf. But that was then. Thursday was the new chapter.

“It was definitely nerve-racking,” said Overton, who was invited as a sponsor’s exemption and shot 77. “I mean, to see your name up there on the leaderboard for a brief second even though it’s the first day of the tournament, it was kind of fun.”

Overton, 39, made nearly 300 starts on the PGA Tour from 2005 to 2017, won two points at the 2010 Ryder Cup at Celtic Manor and pocketed over $12 million in on-course earnings. But his career took a turn in 2017, when a minimally invasive procedure to help a herniated disc led to a life-threatening infection in his spine and called for emergency surgery.

In May 2017, three months after his last start (a missed cut at the Honda Classic), his wife posted on Twitter: “After a month in the hospital and acute rehab center, many nights of excruciating pain and uncertainty, two months of IV antibiotics and home health care, we are finally seeing light at the end of the tunnel.”

Overton was bedridden, unable to walk or use the bathroom for several weeks and hardly even thought about his golf career.

“It was a fight,” Overton said. “It was a struggle. But you got to look to the future, that’s what I’m out here today doing. You got to start somewhere.”

Overton also didn’t expect his return to come in Minnesota.

On Sunday, the whole family was heading from their Florida home to Springfield, Mo., for a Korn Ferry Tour event and Overton’s first start on his medical exemption. But 3M Open tournament director Hollis Cavner called and offered a last-minute exemption into the 3M, so Overton had the airline take their luggage off the plane. They rebooked for Minneapolis.

This is actually Overton’s second comeback attempt. He initially tried to return a few years ago but could tell he wasn’t competitive. He talked to Stuart McGill, one of the pioneers of back and spine performance research, and they decided to shut it down for another year and work on stabilization.

He also worked with trainer Shane Rye, and soon Overton went from only drivers and 6-irons and building up from 6-hole rounds to 9 and 18. His coach, Craig Harmon, had him standing taller and closer to the ball and making sure he was moving through it.

About two months ago he walked four days straight at Valhalla, played from the tips and shot around par. Harmon was also encouraged with how Overton’s swing was progressing. They thought he was ready. To simulate a tournament experience, Overton teed it up at a Monday qualifier a few weeks ago. He shot one over and kicked off some rust.

“You can’t really reproduce this. Going out and playing 18 holes at your home golf course definitely isn’t like the preparation for this,” Overton said. “So I tried to find whatever the closest thing might be.”

Fast forward to Thursday and Overton said he teared up on the first hole, one of a couple of times that happened on the day. Despite staying one under through six, Overton bogeyed the last three and turned in 38. He added two double bogeys on his second nine — one after he missed a three-footer for bogey on 7. It’s no surprise the putter is rusty. Since that requires bending at the waist, it was one of the last things he was able to practice during his lengthy absence. He only started spending significant time on the putting greens about a month ago. Six months ago his putting drills lasted only five to 10 minutes.

Overton will have to go low on Friday at TPC Twin Cities if he wants to make the cut. After this week, he still has more Korn Ferry starts via his medical exemption, and his goal is to improve his membership category and get through Korn Ferry Tour Finals.

“It was an eye-opening experience,” he said. “You go from living the dream to playing for your livelihood. … You never give up.”

Josh Berhow is the managing editor at GOLF.com. The Minnesota native graduated with a journalism degree from Minnesota State University in Mankato. You can reach him at joshua_berhow@golf.com.