‘It felt like I didn’t sleep for a few months:’ Cam Smith recalls LIV decision 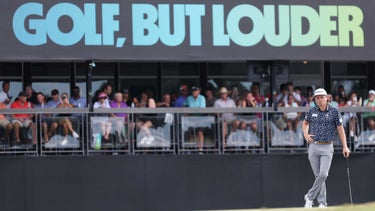 Cam Smith told the Sydney Morning Herald he spoke to many different people about his decision, including Greg Norman and Jay Monahan.

Cam Smith told the Sydney Morning Herald he spoke to many different people about his decision, including Greg Norman and Jay Monahan.

No, Cam Smith’s deal with LIV Golf was not set in stone when he won the Open Championship back in July.

The World No. 3 shed a little light on his decision to the Sydney Morning Herald as he gets set to return to his native Australia for the first time in three years this week at the Fortinet Australian PGA Championship.

“I was definitely leaning one way, but it wasn’t signed on paper,” Smith told the Sydney Morning Herald. “There was still so much stuff to do, and so much to think about.”

After his win at St. Andrews, Smith now-infamously rebuked a reporter who asked about joining the upstart, Saudi-backed, PGA Tour rival league.

“I just won the British Open, and you’re asking about that? I think that’s pretty not that good,” Smith said at his winner’s press conference.

Smith said the decision was not one he took lightly and he knew there would be blowback if and when he decided to take the plunge.

“It felt like I didn’t sleep for a few months,” he said. “I was constantly thinking, ‘what will other people think?’ That was a really big factor for me. I feel like I do most things by the book and to be one to step away … was really tough for me.”

Smith ultimately left the PGA Tour at the conclusion of the FedEx Cup Playoffs in August for a reported signing bonus of $140 million with LIV Golf, along with fellow Aussie Marc Leishman and four other pros. He’s one of the pros to make the jump to publicly cite the guaranteed money as one of the reasons for defecting.

All players who have left for LIV Golf are suspended from playing on the PGA Tour.

Smith also told the Morning Herald he spoke to many people close to him about his decision and even got a call from Rory McIlroy, just days after the Open when Smith fired a back-nine 30 to come from behind to keep McIlroy’s major drought streak going.

“I’ve always had respect for Rory and I’ve liked what he says on the golf course,” Smith said. “He said, ‘congrats’. There were maybe a couple of little jabs in there. He was happy I played well and it was a good tournament. Then we talked about the PGA Tour and LIV. There was a bunch of stuff he wanted me to know before I made my decision. I wouldn’t say he tried to directly talk me out of it, but he definitely wanted me to stay.”

He also confided in fellow Australian Ian Baker-Finch, who detailed some of their conversations in a joint interview with Smith to the Daily Telegraph earlier this month.

“In the very last night line of our conversation, I said, ‘Look … if I was your dad, I would be telling you to take the money,’’ Baker-Finch told the Daily Telegraph. “I really hoped Cam wouldn’t go because I felt he had the ability to be No. 1 in the world and create a huge name for himself like Adam Scott has done over the years like Greg Norman did himself.”

Smith also told the Morning Herald he spoke to both Norman, LIV Golf’s CEO, and PGA Tour Commissioner Jay Monahan. He wanted to know what each tour had planned to help grow the game in his home country.

Norman promised Smith LIV would head down under. That promise came true last week with LIV announcing it would host an event at The Grange Club next spring.

Monahan said the PGA Tour was looking into hosting a Korn Ferry Tour event in Australia.

“For me, the PGA Tour is a great place,” Smith said. “It’s a great tour that does really good things. But as you look back, Adam [Scott] has been one of the best golfers in the world for 20 years and I just think it’s really weird for them [PGA Tour] to not have an event [in Australia] just because of him,” Smith says. “Then you have Jason [Day], Marc [Leishman], there’s a bunch of guys they could have done so much for. The Aussie crowd gets around it so much … But I just don’t think it’s that profitable for them and that’s kind of the reason behind it all.”