In the Vermont mountains, an island-green par-3?! Yep, and damn good pizza, too 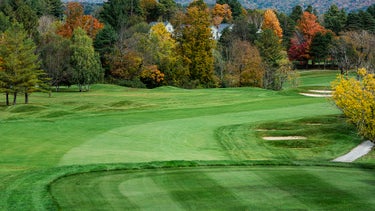 Just off Route 103, in the cozy ski town of Ludlow, Vt., you’ll find a glorious marriage of two of life’s great indulgences: golf and pizza.

Just off Route 103, in the cozy ski town of Ludlow, Vt., you’ll find a glorious marriage of two of life’s great indulgences: golf and pizza.

And yet just off Route 103, in the cozy ski town of Ludlow, in the southern end of the state, you’ll find a glorious marriage of two of life’s great indulgences. Enter Off the Rails, a brick-oven pizzeria and bar in the shadows of Okemo Mountain that about five years ago installed a par-3 next to its parking lot. And not just any par-3: a kitschy homage to the iconic island-green 17th at TPC Sawgrass.

“I’m the one that built it,” said a gravelly voice on the other end of the line.

It had been nearly four months since my Labor Day weekend visit to Off the Rails when I finally called up the restaurant this week to learn about the genesis of the hole. As luck would have it, its designer picked up. That would be Casey Crompton, who also is the establishment’s manager. Crompton is a lifelong golfer from the South Shore of Boston; in his day, he was a scratch player and high-level amateur. It was his idea to build the hole, which took about two weeks, to attract the apres-golf crowd from local courses. (Apres-ski, not so much. The green is in the water only from May to October.)

“I knew guys that play golf certainly like to partake in some beverages after a round, and I thought of a floating green,” Crompton said. Presumably he also knew the idea would resonate with his boss, Troy Caruso, who not only owns Off the Rails but also a golf course just down the road, Fox Run.

“We use foam golf balls,” Crompton went on. “It’s probably about a 30-yard shot. When people get it on the green, they get very excited. Sometimes people come in and say they got a hole-in-one but that would be once a month maybe.”

When people get it on the green, they get very excited. Casey Crompton 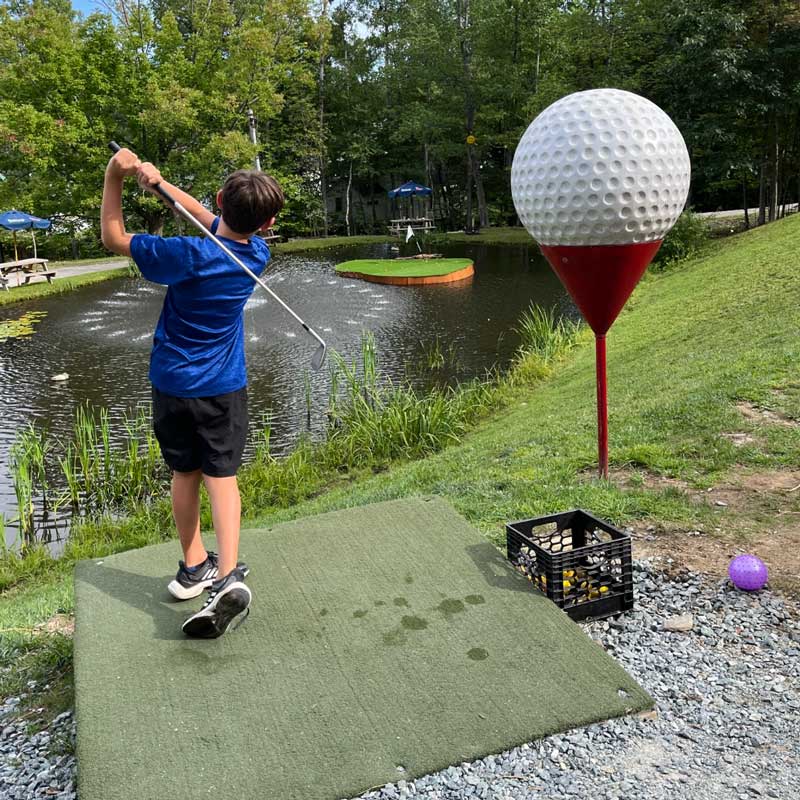 Having taken about 10 swipes myself ­— and also having watched the all-ages crew of 14 family and friends in tow with me take their own share of swings — I can confirm the challenge of the shot. The green is small — maybe 10 yards wide by five yards deep — and pitched from back to front with a flag in the back right. A faux alligator parked on the back edge of the surface serves as a backstop but only for well-struck balls that roll softly by the hole. The airy weight of the foam balls also takes some getting used to, as does the pressure of IPA-sipping patrons looking on from the patio.

“It’s quite difficult,” Crompton said. “I did have a guy come in one time and he bet me he could hit the green once with three balls.” Crompton took the action — dinner was on the line — not knowing he had just wagered with a professional golfer. “He just missed the front edge on the first, just missed the back edge on the second one,” Crompton said. “The third one, he hit it on and if the green was six inches deeper, it would have stayed on, but it just rolled off.”

Crompton’s take? He accepted nothing. Seeing his customers enjoy the hole, he said, is payment enough.

And enjoy it they do, or at least they did on the day my troop dropped by to graze on mouth-watering pies with such exotic fixings as truffled wild mushrooms, fried eggplant and caramelized onions, washed down with freshly-kegged local brews. The big kids loved the challenge of the shot, while the little ones more reveled in retrieving the balls out of the water with a fishing net. The Trumpian fountain just in front of the green helps in that regard. “The little ripples from the fountain bring the balls back to the edge of the pond,” Crompton said. “I scoop them out the next day, and we begin all over again.”

Crompton has other hopes for the hole, including visions of a “Tiger tee” up in the woods. “More like a 60-yard shot,” he said. “That’s possibly coming. Gotta get the right balls, right materials, it’s a lot of work.”

“I would imagine so,” Crompton said. “I haven’t seen this anywhere in the country. I Google it all the time. I really should duplicate this.”