Ian Poulter, Billy Horschel confronted each other. Poulter shares his side. 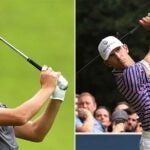 Ian Poulter and Billy Horschel on Saturday during the second round of the BMW PGA Championship.

Ian Poulter touched the chest of Billy Horschel with his left hand.

Horschel took a small step back.

Poulter slid over to Horschel’s left side with his left arm raised.

All the while they were talking, though the sound was barely audible.

The scene, captured in a video shot by George Cooper of National Club Golfer, didn’t look good Wednesday at Wentworth Golf Club. It looked heated. You can imagine why, and many have. In short, Poulter is a longtime DP World Tour and PGA Tour pro who has joined upstart LIV Golf, but is playing this week’s event at Wentworth, the BMW PGA Championship on the DP World Tour, ahead of a trial that should determine whether he and other LIV players can play more DP World Tour events in the future. Horschel, meanwhile, is a longtime PGA Tour player, the defending BMW PGA champion, and has been vocal in his displeasure at the idea of LIV players returning to the PGA Tour or the DP World World Tour, including on Tuesday, when he spoke during his pre-tournament press conference. And a day later, one day before the start of the event, Poulter and Horschel met on the Wentworth practice green. It’s complicated.

But Poulter said it shouldn’t be. He dismissed the discussion on Thursday. Both sides also said they talked on Tuesday, after Horschel’s press conference. And on Saturday morning, Poulter even spoofed the video on his social media channels, and Horschel shared it.

Was everybody trying to diffuse things? Perhaps. But Poulter told Golf Digest on Thursday that he had “no problem with Billy.”

“All these [players] out here, I have been friendly with for a really long time,” Poulter told Golf Digest. “So let’s draw a line between personal and business. It’s really easy to have a level-headed conversation with someone when you respect them, even though you have a difference of opinion. That’s fine. I can still be somebody’s friend.

“That’s the nice thing about this game we play, and it will be a sad time if people let it spill over and take friendships away. That would be sad. We had a lovely chat the night before for an hour, outside the front of the hotel. There’s nothing in it. Billy is quite an animated guy, and I am, too. He has strong opinions, and I normally do, too, so you can tell how that would look on camera.”

Horschel also said he and Poulter talked Tuesday night. In an interview on the Gravy and the Sleeze show on SiriusXM radio on Wednesday, Horschel explained why he thought LIV players shouldn’t be playing this week and said he had a “conversation” with Poulter and Lee Westwood, another longtime PGA Tour and DP World Pro who is now playing for LIV.

“Obviously I’ve said my comments, and I’ve been consistent with everything I’ve said for the last couple months,” Horschel said on the show. “I don’t feel these guys should be in this tournament this week. I understand that a lot of these guys, several of these guys have supported the European Tour for many, many decades. But the reason I don’t feel like they should be here is one, they didn’t follow all the process; they didn’t get a release and then they got suspended, or whatever they did on DP World Tour, and they put an injunction in that allowed them to play, so that court case gets decided in February. The one thing I looked at too is that these guys signed for a lot of money and they’re playing for a lot of money on that LIV tour. And I’m very happy for them, and I’ve said that from the very beginning. I’m very happy for these guys that made that decision and that’s the decision they wanted to make for their career. Like, that’s really cool. That’s not what I want to do, but that’s what they want to do. So I’m happy for them.

“But the DP World Tour guys have struggled over here financially to play for big, big purses. Now, they’re playing at the biggest purse I think they have on this tour, that’s a full-field event, and you got X-amount of LIV guys that are taking spots away from players that are trying to keep their card, or raise their profile in the game of golf, and at the end of the day, depending on how many of those LIV guys play, they’re going to wind up taking money away from these other DP World players that need it more honestly. And so, that’s tough. That’s why I said I don’t think they should be here personally.

“I’ve had conversations with Lee and Ian. You know, I talked here Monday and I didn’t know where I was going to fall on this fence a little bit and then I said my comments yesterday in the media and then I saw Lee and Ian at the hotel afterwards and I just sort of said, hey, guys, just to let you know, this is what I said in the media, and we had a conversation for about an hour and the great thing I love about Ian and Lee, who I’ve known for many years and I get along with very well, is that we can disagree on views and have different opinions, but we can still be very respectful and we can give our side of what we see things and try to understand the other side, understand what the other person is trying to bring. But we can still be friends and have still the same friendship. Like I said, I have no ill will towards these guys at all and if someone has an issue with me, that is their own issue, it’s not me. I mean, I don’t — like I said, it’s nothing personal with me.”

On Saturday, Poulter and Horschel tried to put an end to it all. On his social media channels, Poulter wrote: “Don’t always believe what you read or hear in the media,” and he applied the following audio to the original video:

“Billy, we spoke about this,” the Poulter audio said.

“No, no, no, it’s light blue on the bottom, navy on top. You got it wrong. OK, you tell me,” the Horschel audio said.

“OK, Rod Stewart, what are you wearing tomorrow?” the Horschel audio said.

“Billy, it’s Sir Rod Stewart,” the Poulter audio said. “Picture this: my tartan trousers that no one likes — I know you don’t have a pair of them — so let’s no [bleep] it up tomorrow.”

On his Instagram story, Horschel shared the video and wrote:

“Poults never told me he was mic’d up!”