I talked golf with viral chatbot ChatGPT. The results blew my mind 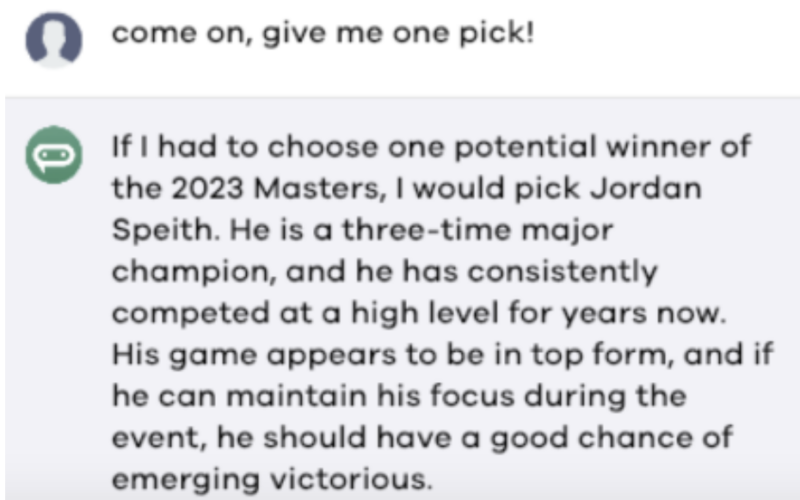 ChatGPT’s seemingly bottomless well of knowledge got us thinking: Could the bot sustain a prolonged and insightful conversation about golf?

ChatGPT’s seemingly bottomless well of knowledge got us thinking: Could the bot sustain a prolonged and insightful conversation about golf?

If you haven’t already heard or read about the human-like chatbot ChatGPT, you will soon. Launched in November, the much-buzzed-about bot is like a mashup of Google and Alexa, except way more personable: a know-it-all search engine with which you can have engaging conversations. According to its developer, OpenAI, a small San Francisco company into which Microsoft has poured billions, the app’s “dialogue format makes it possible for ChatGPT to answer follow-up questions, admit its mistakes, challenge incorrect premises and reject inappropriate requests.”

It’s Jetsons stuff and then some.

ChatGPT is not only bright but it’s also creative. It will write you an original poem or rap lyrics about any subject you choose. Add “explain like I’m 5” to any of your queries, and it’ll break down complicated topics into layman’s terms. On Monday, the New York Times reported on the alarming number of college students who have been using ChatGPT’s generative intelligence — and knack for producing clean, authoritative prose — to author essays for them.

Before you know it, the bot will replace your golf buddies.

But the app’s deep well of knowledge on seemingly every subject matter did get us thinking: How much does ChatGPT know about…golf? Like, really know. From swing advice to course design to current events on the PGA Tour, can the bot sustain a prolonged and insightful conversation about the game?

On Tuesday morning, I found out. First, I installed ChatGPT’s app — it’s called Genie — on my iPhone. (You can get a 3-day trial for free; after that, plans vary from $6.99/week up to $99.99/year. You also can experiment with a web-based version of the bot here.) Then, I cracked my knuckles and began typing on a variety of golfy topics, from Tiger vs. Jack (who, by the way, has his own AI-powered chatbot in the works) to the rise of LIV Golf to Ben Hogan’s fabled “secret.” The results were stunning, or at least I thought they were.

You can read my conversation with ChatGPT in its entirety below, or if you’re strapped for time, here are 5 quick takeaways:

The bot knows virtually everything, in the same way that the internet does, but it delivers that knowledge more digestibly and often with flair or whimsy. It’s not perfect — it interpreted LIV Golf as “live” golf and said Tiger Woods hadn’t won a major since 2013 — but its modesty when it does err is endearing. (It apologized for misspelling Spieth.) Also, the vast amount that the app does know quickly covers over any blind spots.

2. ChatGPT is a big Tiger fan

You can read below for more color but the bot is bullish on Woods, even in his injured state, which is in line with the bot’s generally sunny demeanor. As it told me when we were discussing Woods, “I think there is always hope for a positive outcome, no matter the circumstances.”

3. ChatGPT wants to attend the Masters

I’m not sure how that would work, but if anyone can make it happen, it’s Augusta National.

This is perhaps no surprise given how many slice tips and three-putt elixirs and swing-speed tutorials there are on the web, but the speed with which the bot provides the wisdom in a conversational manner is impressive.

The bot doesn’t seek to take sides on issues, but when pushed, it’ll opine. Most overrated golfer? Will LIV survive? Does Tiger have more major wins in him? On those topics and more, ChatGPT did not disappoint.

Here’s our conversation in full: