‘I pay zero attention to McIlroy and Woods’: Greg Norman responds to critics 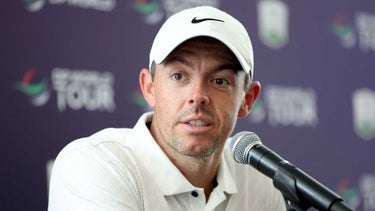 Greg Norman says he has no plans to step down as LIV Golf CEO and that he has the full support of his Saudi Arabian backers.

In an interview with Today’s Golfer published Saturday — which you can read in full here — Norman also responded to two of his critics.

“I pay zero attention to McIlroy and Woods, right?” Norman said. “They have their agenda for whatever reason. They’re saying whatever they want to say. It has no bearing or effect on me. I’m going to be with LIV for a long, long period of time.”

Norman’s comments come in response to Rory McIlroy and Tiger Woods, who have recently called for Norman to leave his position with LIV. Both say the move is necessary for the PGA Tour, where McIlroy and Woods play their golf, to meet with LIV, which started events in June. Since then, LIV has signed multiple Tour players, the established brand has unveiled a host of changes in response, and both organizations have sued each other.

McIlroy was first in his solution.

“So I think there’s a few things that need to happen,” he said at last month’s DP World Tour Championship. “So there’s obviously two lawsuits going on at the minute — there’s PGA Tour versus LIV, and there’s this one that’s coming up with the DP World Tour in February. Nothing will happen if those two things are still going on, especially — yeah, you’re limited in what you can do.

“And then I think from whatever happens with those two things, there’s a few things that I would like to see on the LIV side that needs to happen. I think Greg needs to go. I think he just needs to exit stage left. He’s made his mark, but I think now is the right time to sort of say, look, you’ve got this thing off the ground, but no one is going to talk unless there’s an adult in the room that can actually try to mend fences.”

Woods then echoed the thought this week.

“I see that there’s an opportunity out there if both organizations put a stay on their litigation,” Woods said at the Hero World Challenge, where he is the event’s host. “But that’s the problem — they’ve got to put a stay on it. And whether or not they do that or not, there’s no willingness to negotiate if you have a litigation against you.

“So if they both have a stay and then have a break and then they can meet and figure something out, then maybe there is something to be had. But I think Greg has to go, first of all, and then obviously litigation against us and then our countersuit against them, those would then have to be at a stay as well. So then we can talk, we can all talk freely.”

In the interview with Today’s Golfer, Norman said he has “the support of our investors.” Notably, the Telegraph had reported about a month ago that Norman might be moved “upstairs” and that former TaylorMade CEO Mark King would take over, only for Majed Al-Sorour, LIV’s managing director, to tell Sports Illustrated that “Greg Norman is our CEO and commissioner. Any suggestion that changes are being made to Greg’s title or role is patently false.”

“Of course it can happen under my leadership,” Norman told Today’s Golfer. “I mean, Tiger might be a messenger, right? Who knows. All I know is we are going to keep doing what we’re doing with LIV, and we are just going to keep moving forward.”

“No matter where I go in the world,” Norman told Today’s Golfer, “nobody — not one person — has said what I’m doing is stupid or wrong.”