‘I felt so low, and so s**t’: 6 takeaways from revealing Rory McIlroy interview 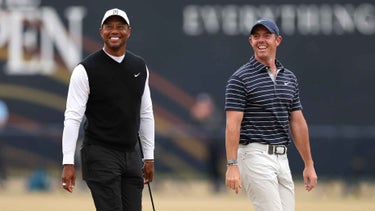 Rory McIlroy says he slept fine ahead of the final round of this year’s Open Championship. But he was restless that morning. And the hours after one of the biggest disappointments of his professional career? “It’s a s**t night.”

In an extensive interview published Sunday by the Sunday Independent, McIlroy also delved into the talk he had with his longtime coach upon working with a new one amid swing changes — “It was a difficult conversation, like telling your wife you want to live in different houses for a bit” — and his struggles at last year’s Ryder Cup — “I felt so low, and so s**t, and by Saturday night, I was done.” Journalist Paul Kimmage has offered outstanding sitdowns with McIlroy in the past, and his latest is no different.

It’s here where you should click over to give the full 9,000-plus word story a read (and that’s just part one; the follow-up is next week). Go, go, go. We’ll wait.

When you’re done, come back and we’ll help you digest it all with six takeaways.

In McIlroy’s words: “I said to Erica [his wife], ‘I’m feeling a bit weird. I’m just going upstairs to lie down for a bit.’ I slept for maybe two hours and the sweat was just pouring off me, then Erica took my temperature and it was sky high. I rang Tiger: ‘I’m not feeling so good here.’ And he goes, “Oh, I feel OK.” But he texted me at 10 o’clock that night, chills, fever, and I’m like, ‘F*****g hell, I’ve just given Tiger Covid! This is horrendous!’ [He laughed.] So we both had Covid going into the Open.”

Wild. Just eight days afterward, during the second round of the Open Championship, Woods gave us one of the moments of the golfing year when he crossed the Swilcan Bridge before tearing up while walking down the 18th at St. Andrews. And just two days after that, McIlroy played a part in one of the more memorable Sundays when he went blow for blow with Cam Smith, before eventually coming up short. (More on that in a sec.)

2. Rory McIlroy believed he had the Open Championship won

In McIlroy’s words: “I played the front nine very solidly and got myself into decent position. Then I birdied the 10th and I’ve a three-shot lead. That was the moment: ‘Don’t do anything stupid and you’ve got this.’ Then Cam Smith birdied the 11th and started his run, but I still thought: ‘Two ahead, eight holes to go … birdie 12 … birdie 14 … birdie 18 … job done.’ And it would have been job done.”

This is tough to read, whether you’re a McIlroy fan or not. After 10, he parred out.

Also in the interview, Kimmage noted that he had talked to Padraig Harrington, who said that Viktor Hovland was McIlroy’s “undoing.” The two made up the final round’s final pairing — and Hovland shot a two-over 74.

“It’s all hindsight, and I feel that’s passing the blame on to someone else,” McIlroy said in the interview. “For me, it was very simple: There were four up-and-downs that day that I didn’t get, and that was the difference between winning the Claret Jug and not winning it.”

3. Rory McIlroy and wife Erica’s talk after the Open disappointment

In McIlroy’s and Kimmage’s words: McIlroy: “I’m sure there was a bit of ‘I don’t feel like I did that much wrong.’ Because at that point you start to think about things: ‘I could have got it up-and-down on 3. I should have made birdie on 9. I should have made birdie on 12.’ You know, all the s**t Erica just doesn’t want to hear. But I give her credit for sitting there and listening to it. I’m sure we tried to watch something on TV to get away from it.”

McIlroy had wanted this one — earlier in the week, he had called an Open win at St. Andrews “the holy grail” — and as noted above, he had it, then he didn’t. In the immediate moment, that’s a lot. At the time, our Dylan Dethier wrote this, which was also included in the Sunday Independent story:

“Rory McIlroy exhaled as he walked out the back of the interview tent. He’d gamely gone through the wringer of post-round interviews — NBC, Sky Sports, radio, then the larger pool of reporters — with his head held high. He’d talked about how well he’d played. About how much there was to be proud of. It’s not life or death, he said. He almost seemed to believe that. But then he left his final interview and re-entered his actual life, and the weight of what had just happened seemed to suddenly, finally hit.

“McIlroy’s wife, Erica, was waiting for him just around the corner, stationed beside a golf cart ready to whisk them away. Up to this point, Rory had kept a strong front. He’d cheered the crowd behind 18. He’d shaken hands, thanked officials, greeted volunteers. He’d answered every question. Now he crumpled into his wife’s arms. The two shared a long embrace, an affirmation that eight years is a long time to carry a heavy burden. That all of this meant exactly as much as it seemed from the outside. And then, as they slid into the back seat of the cart, Rory buried his head in Erica’s shoulder and wept as they drove off into the night.”

At this point, McIlroy said In the Sunday Independent interview, the cart took them to the players’ locker room, where McIlroy saw his caddie, Harry Diamond — “Calm, no emotion … that’s one thing about Harry, he’s so steady and even-keeled” — and they left for their hotel room. McIlroy said he saw no one else that night.

“Yeah, there were a lot of people up there that I knew, but I couldn’t face it,” he said in the interview. “I just couldn’t. I wanted to crawl into a hole. We stayed in the room and ordered some food and a bottle of wine.”

4. Rory McIlroy admits Bryson DeChambeau got in his head

In McIlroy’s words: “Yeah, it was just a bit of speed. The thing about golf is that you’re never going to stay on the same path the whole way — you’re going to veer off on these different little roads — but the trick is to leave a few breadcrumbs on the way so you can find your way back. And maybe I went a little too far down that path, but you start to see progress and these speeds you’ve never had before, and you start to hit it by your playing partners by 30 and 40 yards, and you start feeling good about yourself. What you don’t realize is that your swing is deteriorating.”

McIlroy, following Bryson DeChambeau’s distance-fueled regime that played a part in his 2020 U.S. Open win, has previously admitted that he also chased extra yards, though the word “deteriorating” is notable. Eventually, McIlroy sought another swing opinion.

5. Rory McIlroy dishes on the conversation he had with his longtime swing coach

In McIlroy’s and Kimmage’s words: McIlroy: “It was a difficult conversation, like telling your wife you want to live in different houses for a bit. I said, ‘I’m going on a different path for a while to figure a few things out, but nothing changes in our relationship.’ But I know he was disappointed. It wasn’t handled well.”

Kimmage: “What do you mean?”

McIlroy: “Golf is a small world. People talk. Things get out. It got out before I spoke to Michael, which is pretty shite actually.”

Kimmage: “You’re not a shite person. That’s not your nature.”

Kimmage: “So how does that happen?”

McIlroy: “It was a feeling of shame in a way. I felt ashamed that I was going down this other path and didn’t want to confront that part of it. It was like, ‘Wait until you’re pushed into a corner, and you have to do it.’ I basically didn’t have the balls to ring Michael and say, ‘Look, this is what I’m doing.’ That’s what it came down to. And thankfully he’s a good man and he understood but … it was a weird period.”

Does this clear up McIlroy’s coaching moves better? Maybe. A few months into last year, McIlroy started to work with instructor Pete Cowen, though he previously said longtime coach Michael Bannon was still part of his team. McIlroy won once after that, at the Wells Fargo Championship, then in November, McIlroy described his coaching situation this way, in an interview with Golfweek: “Yes, Michael and I are back working together. I’ve always had a relationship with Pete and I’ll ask for his input if I feel I need it. But now it’s Michael and me.”

In McIlroy’s words: “I was relieved I didn’t have to go back out and lose another match, but I was also deflated. When you’re playing a normal tournament and don’t play well that’s fine, it’s on you. But when you’re on a team and letting other people down it’s a different thing altogether. I felt so low, and so s**t, and by Saturday night I was done. I didn’t want to see golf again until 2022. Then Pádraig told me he was sending me out [in the singles] at number one.”

At the Ryder Cup last September, McIlroy lost his Friday morning foursomes match and his Friday afternoon four ball match, and on Saturday, he was benched for the first time in his Ryder Cup career. In the Sunday Independent interview, he said his confidence had reached “rock bottom.”

On the final day of the Ryder Cup, McIlroy was first out for the Europeans, and he defeated Xander Schauffele 3 and 2.

Just over a year later, he returned to world No. 1.

“Yeah, I really think that Sunday at the Ryder Cup was instrumental in getting back to world number one and doing the things I’ve done this year.

“‘Everyone says you’re the most talented golfer in the world. Why don’t you start acting like it?’” McIlroy said in the interview.