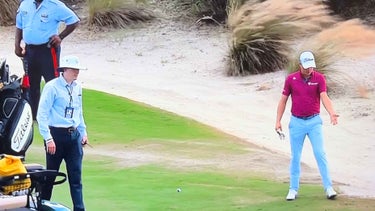 Collin Morikawa cleverly used a rule to prop up his ball in the rough during the Hero World Challenge. Here’s how he did it.

Collin Morikawa cleverly used a rule to prop up his ball in the rough during the Hero World Challenge. Here’s how he did it.

Collin Morikawa took an extra second. He rose out of his crouch, and, to the left of his ball, he put the face of his club into the rough. Was he really going to drop his ball from the lighter cut around the green into the thicker one behind it?

Morikawa and 19 other players, through two rounds at the Hero World Challenge, have been allowed to lift, clean and place their golf balls, following storms at Albany Golf Club. But we need to break down the bookends of that concept. Players can “lift” from “closely mown areas,” according to a PGA Tour spokesperson. But they don’t necessarily have to “place” back into “closely mown areas.”

After his second shot on the 592-yard, par-5 11th, he had found his ball at the bottom of the upslope of the left side of the green. Morikawa called for an official. He was going to lift, clean and place. But there was the question of where he could do the latter. Near the original lie would be OK. But a few inches would possibly be better — the thicker grass could potentially prop up his ball, and he’d be able to make smoother contact.

The official cleared it. It’s here where we should note what the rules say about lift, clean and place, also known as preferred lies. First, the move is a local rule and those are up to the tournament, though the rule book does offer guidance. And the counsel for drops? Model Local Rule E-3 “Preferred Lies” says they can be placed in the “general area,” though no closer to the hole.

So the rough inches behind the grass at the bottom of the upslope of the left side of the 11th green at Albany Golf Club in the Bahamas was good. Morikawa carefully placed his ball.

From there, he pitched on to 6 feet short of the hole, then rolled in the birdie putt. It stopped a string of three-straight bogeys.

“Interesting … it is lift, clean and place; Morikawa going from the short grass to the rough,” announcer Dan Hicks said on the Golf Channel broadcast, ahead of the putt. “Just kind of perched up when he hit his previous shot.”

“Gave himself a beautiful lie and hit a very nice shot,” analyst Paul Azinger said. “That’s just one of the things you can do. It’s lift, clean and place through the green.”

“Yeah, and he brought in a Tour official just to make sure that they could make that decision based on the lie and put it into that primary rough and prop it up and it turned out fine — he hit a beautiful shot into here,” analyst Notah Begay said. “Now he’s got a really nice look for his four.”

It was one of four birdies, against three bogeys, in a round of one-under 71, though Friday was demanding, with high winds. Still, Morikawa is one back of leader Viktor Hovland entering the weekend.

“I thought I played pretty well,” Morikawa said afterward. “I just kind of made, you know, errors on myself, and it wasn’t really the conditions, it was kind of just me hitting some bad putts. It happens. But we were able to kind of right the ship and kind of turn the round around. Kind of after I think 12, I started slowly figuring some things out. By the time we got to 13, 14, the game felt really good and, you know, hit the shots I needed to when conditions are this tough.”