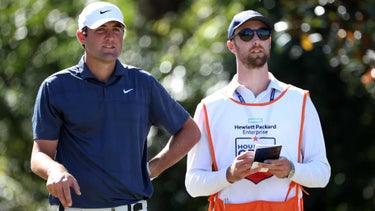 Aaron Wise might only have one career win, but our expert thinks he’s primed for a big week at Memorial Park.

Aaron Wise might only have one career win, but our expert thinks he’s primed for a big week at Memorial Park.

Tour pros play a game with which most of us are unfamiliar, but this week they’re on a course to which all of us can relate. It’s time for the Cadence Bank Houston Open, at Memorial Park, an historic muni that was overhauled three years ago by Tom Doak, with design input from four-time major winner Brooks Koepka.

Koepka will not be in the field in Houston. Nor will defending champ, Carlos Ortiz. Both men have since decamped for LIV. But Scottie Scheffler will be making the trip from his home in Dallas, and his pal, Sam Burns, will also be in the mix. Scheffler and Burns are the current favorites on the betting board, followed by Aaron Wise, Tony Finau and Russell Henley, who won last week at Mayokoba.

Who you gonna take?

Andy Lack has some ideas. As he does each week, GOLF.com’s expert prognosticator is sharing his four favorite plays: a winner, a top 10, a top 40 and a matchup. You can see them below. Because we like to know where public opinion is leaning, we’re also sharing data from Chirp.com, a free-to-play mobile platform (and GOLF.com affiliate) that offers fans a range of ways to engage in the actions.

Yeah, I know. Seems a bit jarring, endorsing a player with one only one career win, which came over four years, at such a short price. But I’m convinced Wise is on the precipice of something special. The 26-year-old ranks top-25 in this field in long-term proximity from 175 yards, Bermudagrass putting, strokes gained off the tee in difficult scoring conditions, strokes gained total on long golf courses, and bogey avoidance. Given those stats, it comes as no surprise that Wise has finished 11th and 26th in his two appearances here, gaining over four strokes ball-striking in both occasions. Coming off a flawless Sunday 64 to finish top-15 last week in Mexico, Wise has momentum, which I expect will carry him to his second career win.

It’s unlikely that Day will ever return to being a top-five play in the world. But that’s not what we’re asking. All we need is for him to crack the top 10 this week. I like his chances for a few reasons. The former PGA Championship winner has now record three top-25 finishes in a row and gained over 3.6 strokes off the tee in his last three measured starts. Day can still bomb it. And for all his injuries, his short game remains elite. The 12-time PGA Tour winner now returns to a course where he has already finished 7th, and which closely resembles some of the other longer and more difficult tracks (Quail Hollow, Bay Hill, Torrey Pines, Augusta) where he has played well throughout his career.

Smalley has long been on my radar since his days at Duke, where he spent his time practicing on a long, firm, and fast Bermuda-grass course. When considering players farther down the odds boards, I look for those that possess one undeniable elite skill set. In Smalley’s case, he has emerged as one of the best long-iron players on Tour, ranking third in this entire field in proximity from 200 yards plus. It should come as no surprise that Smalley finished 15th here last year, gaining strokes in all four major categories. If we zoom out, most of his best finishes during his rookie season have come at 7,400 yard plus courses, such as Corales, Vidanta Vallarta, and the Renaissance Club, that put long irons in his hands often. Coming off an 11th place finish at the Butterfield Bermuda, Smalley should be in the mix on Sunday.

Recency bias surely played a role in producing this line, and I’m looking to take advantage. Yes, Henley won last week, so he’s riding high. But these odds feel like an over-reaction. Henley’s greatest advantage comes on short, positional wedge-heavy courses. And Memorial Park does not fit that profile. Its length makes it more suitable for Matsuyama, who finished runner-up in this event last year. At even money, I’m all in on Hideki.

The Trifecta game, on Chirp, calls for fans to pick three winners: a favorite, a contender and a long shot, all categories based on the Official World Golf Ranking. Hundreds have Chirp users have already made their plays this week. Here’s a look at the top vote getters in each category, along with the percentage of support that they’ve received, listed in parentheses. To get in on the fun, sign up to Chirp for free here.