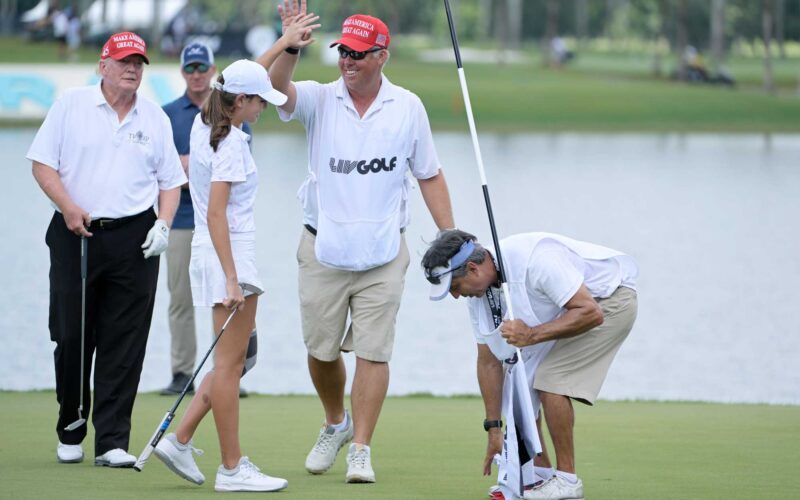 Donald Trump played in a pro-am Thursday at LIV Golf’s team championship in Doral, Fla. This is what it looked and sounded like up close.

Donald Trump played in a pro-am Thursday at LIV Golf’s team championship in Doral, Fla. This is what it looked and sounded like up close.

The former President had the 9 a.m. tee time at the LIV Golf pro-am at his Doral course on Thursday but didn’t appear until two minutes past the hour. No biggie, though. That’s one of the perks when you own the place.

About 20 fans were gathered by the tee when Trump arrived in a Trump-branded golf cart. Strapped to the back was a nondescript golf bag with “Trump 2024” stitched into its side. The President’s name was also sewn onto the logo on his chest and into back of his red MAGA hat. He greeted his first teammate of the day, Brooks Koepka, like an old pal. (Sergio Garcia played the second nine with Trump.) They’ve played together before; Brooks knows the deal. Filling out the foursome in the scramble were one of Trump’s sons, Eric, and Trump’s 15-year-old granddaughter, Kai.

The course is named Trump National Doral, and is one of Trump’s 16 golf properties. It’s the best course in the world for tournament golf, Trump says, behind only his courses in Scotland and Washington D.C. Trump never lacks for bluster, but Doral is inarguably a fine test for professional golfers. The PGA Tour visited here for 45 years before backing away from the Trump brand during his 2016 campaign.

There’s at least one thing you must love about Trump’s game — and which more than excused his tardy arrival — and that is the speed at which he plays. It would be hard to play much faster. Trump hiked up his slacks to bend over and stick a tee in the ground, and before you could pull out your phone to snap a picture, his ball was in the air.

“I enjoy it, I can promise you that. I’m not a big fan of slow play,” Koepka said after the round.

As Trump’s opening shot reached its apex, he was already picking up his tee. He almost never watches the ball reach its destination. If he’s unsure about where it wound up, he’ll ask his caddie. But he was sure about that first tee ball.

“You think Biden can do that?” Trump asked the group of onlookers. “I don’t think so.”

The pro-am environment is a comfortable setting for Trump, who has long been accused of having a casual relationship with the rules. He hit at least one ball into a water hazard on the front nine — he was dealing with a bit of a short-right miss — but no need to take a drop from there. He just played on from where his granddaughter’s ball was sitting. Kai, it should be noted, has the best swing in the family and it isn’t close.

Like Trump or not, he is still the most famous golfer on the planet, even if his 2.5 handicap is now nothing more than a vanity index. (He has posted just one score since being sworn into office more than five years ago.) Trump’s move, in photo or video form, has been seen by, what, billions of people? His swing is flatter than most and he takes it back about three-quarters of the way. Eric’s move is similar. They both hit it low. The elder Trump managed the pace of the greens well throughout his front nine, but made nothing. His accompanying support staff reminded him “a lot of good putts don’t go in.”

At LIV’s event at Trump’s New Jersey course earlier this year, the President’s presence was well documented. He hung around for the weekend, talked to pros, took photos with fans, watched along with Tucker Carlson and Marjorie Taylor Green and ultimately earned more attention than what was happening on the course.

Thursday at Doral was not that, because no fans were permitted on-site, just pro-am family and friends, resort guests and about a dozen secret servicemen in polos. (The weekend at Doral won’t be that, either, because Trump isn’t sticking around.) The few spectators who hoofed it through the dewy Bermuda grass in felt-like-90-degrees heat — well, one can imagine which way they leaned politically. One had a photo of Trump embedded into the back of her phone case. Another was an event staffer who paused his maintenance cart to shout to Trump on the 5th tee:

One of the 50 or so people following along FaceTimed the action to his family, broadcasting Trump’s every move in play-by-play. Another big Trump fan arrived when the group reached the 8th fairway: Majed Al Sorour, the managing director of LIV Golf, the head of the Saudi Golf Federation and also a director of Newcastle United Football Club. Al Sorour is a busy man, but during LIV events he makes time to press flesh.

“Mah-zheed!” Trump said as they shook hands and hugged.

The Trump relationship with Saudi Arabia is an important and complicated one, politically, and it also has implications for the golf world. LIV Golf is backed by Saudi’s Public Investment Fund. Al Sorour’s boss is the manager of that fund. Trump has opened up multiple courses for LIV’s use. A Saudi fund invested $2 billion in the private equity firm of Trump’s son-in-law, Jared Kushner. “They’re good people with unlimited money,” Trump said Thursday.

Trump, who has been in the news after the Jan. 6 committee subpoenaed him to testify, heard a variety of questions from reporters at Doral, including about whether he might run for office again, or if he would campaign with Florida Governor Ron DeSantis.

I was more interested in what Trump thinks of his game. Could I squeeze a little humility out of the former President? He’s a solid player but not without weaknesses. All golfers have them. Trump had just made par on the 7th hole when he stopped to sign some hats that are popular with a significant part of the voting public.

I jumped in to ask, “What’s the best part of your game?”

“It’s all good,” Trump said, head down as he signed.

About a minute later, I tried again.

“What are your strengths and weaknesses on the golf course?”

“I hit it straight. I hit good drives. I hit good irons. I putt good. I think I have a pretty good game.”

A half hour later, Trump reached the 10th tee, where Garcia was waiting to take the baton from Koepka. With a new crowd assembling, Trump hit another good tee shot and delivered the same Biden quip.

Anyone who had been there on the 1st tee might have rolled their eyes. Or maybe they loved it.

Feel free to share your thoughts with the author at sean.zak@golf.com.