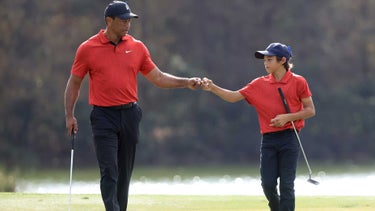 After Tiger Woods’ latest start, Padraig Harrington is a Tiger believer again. And at the PNC Championship, Harrington is not alone.

After Tiger Woods’ latest start, Padraig Harrington is a Tiger believer again. And at the PNC Championship, Harrington is not alone.

Golfers roam the fairways and greens, zipping by in carts and slugging down halfway-house cocktails. Tee shots range from 315-yard heat-seeking missiles to 31-foot tops, and everything in between. Congenial conversations are held between strangers who have been paired together for the occasion, which was the first of two Pro-Ams to be contested before this weekend’s 36-hole scramble.

Even the tournament seems afraid to infringe on the regular operations of the club. There are few logos, only a handful of volunteers and a buildout that bears a closer resemblance to a member-guest than a PGA Tour-sanctioned event. Even the street signs — the ones that guide visitors to the proper entranceway and parking lot — are few and far between.

Welcome to Thursday at the center of the golf universe.

It is strange to think of this tournament as anything other than a hit-and-giggle, which is all that it has been for the better portion of its quarter-century existence. But even hit-and-giggles can attract the attention of the golf world when they include Tiger and Charlie Woods.

Tiger hasn’t even arrived yet — his attendance is expected for Friday morning’s Pro-Am round — and yet there is little question that he has shaken the PNC to its core. Ever since Tiger showed up for the first time in 2019, he transformed the event from a sleepy Champions Tour retreat to the heartbeat of professional golf. Three years later, it seems the tournament is still figuring that out.

The enormity of this small Central Florida golf tournament has only been amplified by the scarcity of Woods’ playing appearances, which has dwindled to (some of) the majors, the Hero, The Match and, now, the PNC. These days, December has become as important a month as any for Woods, particularly among the diehards eager to see if he can still regain his form — a group that apparently includes Padraig Harrington.

“He’s looked good physically. He looked better at The Match. So, you know, I’m not saying he ‘could be,’ I actually believe he will be a danger,” Harrington told media on Thursday, citing Woods’ 175-mph-plus ball-speed numbers as proof of his continued recovery. “I think he’ll win another major. The way I looked at him, I genuinely think he will be in contention. If it’s a major, he’s going to have a chance.”

Harrington, who enjoyed a career renaissance himself in 2022, is as thoughtful and technically savvy as any professional golfer. When he says he believes in Woods’ ability, he means it. But it’s also fair to wonder if Harrington found himself at least partially under the gravitational pull of the Tiger Woods hype machine, which roared to life Thursday despite the damndest efforts of a rain-shortened pro-am.

“I’m so disappointed that the World Cup Final is at on Sunday morning,” Harrington said of the big game’s 10 a.m. ET start. “I really wanted to be on mid-afternoon at 3 o’clock going up against the PNC Championship because I think Tiger might win over on the TV ratings to the World Cup. That’s the difference he’s made to golf.”

Harrington is far from the only victim of Tiger-mania at the PNC Championship. Tickets to this week’s event sold out far in advance of Thursday’s opening day. Tournament organizers have built an overflow tent to handle the onslaught of national media who will soon arrive. While the on-course footprint remains small, the area surrounding the clubhouse is filled with the kind of tent city typically saved for major championships.

“Well, if you look behind us here, there’s quite a lot more infrastructure than there was nine years ago when we first played in this thing,” Stewart Cink said with a grin. “Tiger is his own universe when it comes to that. We’ve all known that for a long time.”

There is no hiding from Tiger Woods at the PNC, try as this tournament — or Woods himself — may. The machine has grown far beyond the capabilities of even the man once responsible for it.

“Everything about Tiger on the golf course, it is a different vibe than it was,” Harrington said. “It was big back then, but I don’t know, there’s an emotion to the crowd. They’re not just excited about the great shots, which is I think what they would have been 15 years ago, there’s a genuine emotion about it. It has changed. There’s no doubt about it. It is a different emotional atmosphere around it. In many ways, it’s bigger.”

That sort of environment lends itself to hyperbole, especially as Tiger’s career has shifted from epic to mythic proportions. Over the years, the machine has grown to care more about believing in Tiger Woods’ greatness than it does about seeing it. And for as long as that is the case, there will be people willing to wonder if there’s one more moment left in that crimson mock neck.

It’s not fair, of course. It never has been. Not to Tiger, nor his competitors. This, it turns out, is the nosebleed cost of being the greatest.

“Everybody pays a price for everything they get in life,” Harrington said. “The more famous you are, the better you’re doing, you’re going to have to put up with that.”

Play ended early on Thursday afternoon, and finally, it seemed, the energy at the golf course had shifted.

It was no longer a lazy Thursday at the Ritz — not with that weather approaching. The clouds were black by the time the players returned to the clubhouse, and a foreboding wind pressed against the palms. Thunder boomed in the distance.

A storm was approaching, perhaps in more ways than one.