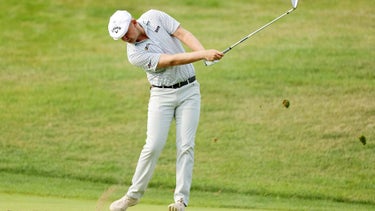 Ben Griffin was working in a mortgage office 18 months ago and is now tied for the lead at the Bermuda Championship.

Ben Griffin was working in a mortgage office 18 months ago and is now tied for the lead at the Bermuda Championship.

Ben Griffin has a chance to start his rookie PGA Tour season with a bang.

In the fourth start of his debut season, the 26-year-old is tied for the lead heading into the final round of the Butterfield Bermuda Championship with Seamus Power at 18 under. He had mixed results in his first three starts of the season, missing the cut at the Fortinet Championship, but then tied for 24th in Jackson and tied for 60th in Las Vegas. He did make the most of a start at the end of the 2022 season, finishing fourth at the Wyndham Championship in August, having already secured his PGA Tour card for this season through his play on the Korn Ferry Tour.

But earning that PGA Tour card took a lot of work, especially considering he wasn’t even playing competitive golf 18 months ago.

“It’s tough financially,” Griffin said of the challenges Saturday after his third round. “You know, during Covid I didn’t have status on the Korn Ferry Tour or the PGA Tour and it’s very difficult unless you have sponsors or a support system that can kind of help you get back.”

Griffin joined the PGA Tour Canada upon graduating from North Carolina in 2018, where he was an All-American. He quickly earned Korn Ferry Tour status for the next season but made just eight starts and two cuts in 2019.

Without any momentum and mounting financial obligations, Griffin decided to walk away from competitive golf entirely and worked a desk job as a loan officer for a mortgage group in the spring of 2021.

“I felt like I always had the game,” Griffin said Saturday, reflecting on the decision. “I grew up competing against the Scottie Schefflers, Collin Morikawas. I kind of touched base on that a little bit with the media this past year. I’m just comfortable. It was really, it was a combination of burnout a little bit from Covid and then also financially, I didn’t want to rely on my parents anymore for everything. They’ve done so much for me.”

It was almost an accident he got back into the game.

It started when he forgot he was signed up for a U.S. Open qualifier in 2021, but it was too late for him to withdraw and get his money back. So he played and advanced to the sectional qualifier with a birdie on the second playoff hole.

He ended up missing the field at Torey Pines by a stroke, but there were other signs it was time for him to return to the game.

Griffin told PGATour.com last year he played so well at a member-guest at Price Cutter Country Club, host of the Korn Ferry Tour’s Price Cutter Charity Championship, the members convinced him to come back the next month and Monday-qualify for the tournament.

He did, and he made it through to the event in Springfield, Mo.

“I’ve got all these things kind of telling me you have to go play golf,” Griffin told PGATour.com last November. “Sure enough that Korn Ferry week I kind of made a decision that I should probably get back to golf and I had enough time working and had proved to myself that I was legitimate enough to do this for a living, which I kind of already knew. It was just more of a burnout and I needed to make some money.”

Eventually, a friend he had played golf with in Georgia called him up and offered him a two-year sponsorship with his company, Lord Abbett. That was the money that allowed him to quit his job and sign-up for Q-School, where he earned his Korn Ferry Tour card for the 2022 season.

He finished second three times on the Korn Ferry Tour last season and had his PGA Tour status for this season locked up by June.

“I credit all of my success this last year and really the month or two to my sponsors, Lord Abbett,” Griffin said Saturday. “The CEO Doug Sieg, he was crucial in my comeback. Without him, I wouldn’t be playing golf right now. All of these really cool people have stepped in my life. Mike Swann, Jesse Ahearn, guys out in Springfield, Missouri, those guys all supported me and paid for my Q-School last year to get through Korn Ferry.”

With the assurance of his status for the remainder of the season and his sponsor support, Griffin said he can play freely, without having to think about anything financial on the golf course.

“I can go out there and just try to win golf tournaments,” he said. “You see the best players in the world kind of have that mindset and it’s because they’re not thinking about anything except trying to win. When I came back to golf, all my sponsors and everyone has allowed me to think about winning. I haven’t won in the last year, I’ve had a lot of second-place finishes and been in contention a lot. I feel like my time’s coming pretty soon and hopefully, I can get it done tomorrow.”

Griffin and Power will start Sunday two clear of the rest of the field, but if his comments are any indication, Griffin, as he mentioned, feels very confident about his game this week.

“It’s nuts, definitely, to be sitting here talking to you guys, getting ready to win a PGA Tour event tomorrow,” he said.