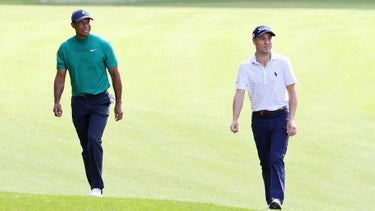 Tiger Woods celebrated his 47th birthday on Friday, and close friend Justin Thomas found the perfect way to roast him for it.

Tiger Woods celebrated his 47th birthday on Friday, and close friend Justin Thomas found the perfect way to roast him for it.

If you weren’t already aware, yesterday, December 30, 2022, was Tiger Woods’ birthday. The 15-time major champion turned 47 years old on Friday, and as always, it was a date worth celebrating for golf fans around the world.

But not just fans who’ve watched Tiger dominate the PGA Tour for the better part of 30 years. The pros got into the action, too. But the most notable public birthday greeting Tiger received from the pro ranks came from one of his closest friends: Justin Thomas.

At 29, Thomas is almost 20 years younger than Tiger, and like many of us he grew up watching and idolizing Woods in his prime. But over the past few years as his own career has shot into major-winning elite status, JT has grown close to Woods and his family, who live nearby in Florida.

Thomas regularly shares tidbits and anecdotes from hanging at the Woods’ Jupiter Island compound, and he frequently tees it up with Tiger and his son Charlie Woods while at home. The three of them, along with Thomas’ dad Mike, have also mixed it up at the PNC Championship over the past three years.

As he and Tiger have become better friends, Thomas has adopted a playful report with the G.O.A.T., often taking ribbings and trash talk further than many other pros would dare.

Which brings us to Friday, and Tiger’s birthday, which Thomas felt deserved a public acknowledgement. It came in the form of an Instagram post featuring a photo of the two stars laughing on the course, and, of course, a joke about Tiger’s advancing age, which is a favorite jab of JT’s.

Jokes aside, the question of whether we’ll see more of Tiger on the course this coming year is an open one. In 2022, Tiger made only three official starts, at the Masters, PGA Championship and Open Championship.

Late in the year, a frustrating case of plantar fasciitis kept him out of the Hero World Challenge and could limit his competitive action in the new year, though he was able to play the PNC with Charlie and the seventh edition of The Match.

Thomas wasn’t the only pro wishing Tiger well on his big day.

On Twitter, Will Wilcox offered a simple, “Happy Birthday @TigerWoods”