Greg Norman opens up on Rory McIlroy, the R&A and his ‘moral line’ 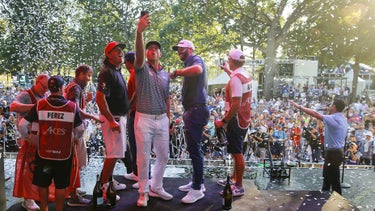 Greg Norman, on Piers Morgan Uncensored, opened up on Rory McIlroy, potential resolution between LIV and the PGA Tour, and his “moral line.”

Greg Norman, on Piers Morgan Uncensored, opened up on Rory McIlroy, potential resolution between LIV and the PGA Tour, and his “moral line.”

Greg Norman, when asked where professional golf will be in the next couple years, says “there will be some merging of the powers to be, just sitting down and having a conversation,” though he added his LIV Golf group does not want that right now.

In an interview this week with media personality Piers Morgan, Norman also said he would tell Rory McIlroy not to “begrudge the other players for making the decision” to join his upstart series. And the LIV Golf CEO said his “heat shield gets a little bit weak” when asked how he’s been handling criticism, then indirectly answered a question of what his “moral line” is.

“My moral line is I believe in the product,” Norman said on Piers Morgan Uncensored. “My moral line is I’ve been a big, staunch proponent of growing the game of golf on a global basis. My moral line is golf is a force for good. So when you have this opportunity — and I’ve seen it; I’ve seen it beyond LIV, prior to LIV; I’ve seen what I’ve done in Vietnam; I’ve seen what I’ve done in Mexico, through my other businesses, through golf course design. It is so resonatingly powerful to see the strength of what the game of golf can do in different countries around the world to change the economy of things, to change the hospitality, to change tourism, all these little ingredients that actually golf is the benefactor of, but actually golf was the initial reason why you could change these deals.

“I am so proud to be in this role, I really am, because my whole life — somebody asked me the question the other day, Greg, do you think this is going to affect your legacy? And I said, you know what, maybe my legacy on the golf course is not my legacy. Maybe my true legacy is what we’re doing with LIV for the game of golf and giving this opportunity to collegiate players, eventually to women, guys we have today to be a true competitor to show that you are additive to the system, and our product is speaking for itself.”

The subject of morals is one of several surrounding LIV Golf; they are backed by the Saudi Arabian government, which has been accused of wide-ranging human-rights abuses. The financing, which Norman said in the interview was $2 billion, has been another topic. Offers of guaranteed money and record purses have helped lure players away from the PGA Tour, and there are lawsuits now on both sides, along with questions of how the four major championships will proceed.

With that in mind, and LIV playing its sixth event next week in Bangkok, and the PGA Tour in the middle of its fall schedule, Morgan asked Norman where pro golf will be in a year or two.

In short, he foresaw the sides meeting, the majors continuing to invite LIV’s players, and the Official World Golf Ranking remaining neutral.

“Look, I ultimately believe there will be some merging of the powers to be, just sitting down and having a conversation,” Norman said on the show. “We don’t want it right now. We’ve tried. And going back to what you’re saying before, we didn’t create this turmoil. We just came in with another opportunity within the ecosystem for the players, for the fans. … We didn’t really start this big fight. We didn’t create this animosity.

“And with the majors, quite honestly, they should be Switzerland, right. If I’m a major, I want the best of the best in my field. They’re the four Super Bowls, four FA Cups, they’re the four whatever you want to call them that should always remain up there — Switzerland — and away from anybody. For them to be dragged into this quagmire, yeah, there’s going to be a lot of questions that need to be asked about that, but they should be apart from them. If you’re a broadcaster of any of the four majors, you should be saying to them, we want the LIV players in there, because 26 of the top 100 players, right now, today, are LIV players. OWGR, they’ve got to be, again, Switzerland, because they’re an independent organization. There’s 22 other tour events in this world that get OWGR points. And I can tell you this: 21 of those 22 are inferior to what the LIV tour is all about. So why are we being targeted?”

On the subject of McIlroy, Norman was asked what his “message” would be to him, considering McIlroy’s defense of the PGA Tour and DP World Tour. In his most recent comments, ahead of this week’s Alfred Dunhill Links Championship, McIlroy said this of the conflict: “I’ve always said I think there is a time and a place where everyone that’s involved here should sit down and try to work together. It’s very hard for that to happen right now when there’s two lawsuits going on.”

“Well, my message is, Rory, you’re an independent contractor; you have the right to make your decision,” Norman said on the show. “Remember, Rory started on the European Tour. Then Rory decided to leave the European Tour to go play where all the money is, where I went to play, to the PGA Tour. Why do we do that? We do that because that was the only option we had as players. We had to go sign on to their rules and regulations; we couldn’t even negotiate their rules and regulations. We had to do the only thing we could possibly do, is play the Tour. What we’ve done now is give them options. Hey, Rory, happy days, do what you want to do. If he’s comfortable over there doing that, an independent contractor, he can. If Rory wants to go to the Middle East and get appearance money to play in tournaments, happy days, go play in those, Rory; that’s your choice.

“Don’t begrudge the other players for making the decision that is a rightful decision under their independent contract or right to go do it. It’s just a shame that people have taken this stance when if you look back over a period of time, they’ve pretty much done the same things themselves.”

Later in the show, Morgan asked Norman how he was handling the back-and-forth between LIV Golf and the PGA Tour personally.

Here is the complete exchange:

“You yourself have gone under unbelievable fire,” Morgan began. “You’ve been snubbed up at the Open; they wouldn’t let you go to the Champions Dinner, which I thought was actually very churlish. As a great golfing champion, a great sporting champion, how are you dealing with that kind of vitriol, the kind of disenfranchisement, from the sport and the official bodies that you were once so welcomed by? How are you on a personal level dealing with that?”

“Look, to be honest with you, at times, my heat shield gets a little bit weak because I am a human being,” Norman said. “I’ve done a lot for the game of golf — I was the No. 1 player in the world for six years; I’ve done things in the game of golf; I’ve promoted the game of golf; I’ve grown the game of golf globally; I took a mission on myself as an individual player to fly all around the world; I was the first guy to do an exhibition match in mainland China; I was one of the first guys to go into the Middle East and do that. And through my golf business at the same time, continue to do that. So when they do these — what happened in the R&A was a petty, cheap, childish shot, to be honest with you. If you can’t rise above it all, shame on you. Because if you’re under pressure from other people exerting pressure on you, shame on you. For you not to sit down and have a discussion and understand what the LIV business model is and to see how it sits within the ecosystem, shame on you.

“Because in business, and remember we’re a commercial entity, in business, you understand what you’re up here what your opponent’s got; you understand what your competitor’s got. Unpack it all and see if you can actually work together within the system to make both entities better for each other, not try and destroy us. And we haven’t tried to destroy the PGA Tour. We have worked very, very closely to work with them.

“Have you lost personal friends in the golf world as a result of all this?” Morgan asked.

“One-hundred percent I have, yup,” Norman said, “Look, if they want to judge me on lack of information and a lack of what’s out there, they’re the ones with the small mind. When you know the facts, you understand the facts, you understand the delivery mechanism and the business model — let me say this, my C-suite are the best of the best in the world of business. The economists, lawyers, marketing, they came from a diverse section of sport and business, not golf. Why do I have over 100 of the best of the best in the business? Because of the business model, and the business model is showing through; the product is showing through. I’m lucky to have these magnificent people behind me. I’m lucky to have an investor willing to invest in the game of golf like they are investing. Golf is lucky to have this.”

The complete interview is below: