From Trevino to Daly to Tiger, the PNC is producing great TV already 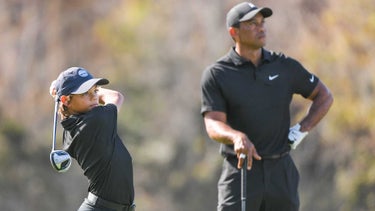 If you didn’t tune in to Friday’s PNC Championship pro-am, I get it. But you missed some good TV from golf’s greats.

If you didn’t tune in to Friday’s PNC Championship pro-am, I get it. But you missed some good TV from golf’s greats.

If you didn’t tune in to Friday’s PNC Championship pro-am, I get it.

The golf season has stretched past its limit. It ended in August, but not really, and again in September, but not really, and certainly it should have ended by November, right? But it didn’t really end there, either, and so here we are with the PNC on the telly, a tournament that finishes a week before Christmas and just two weeks before the 2023 golfing year begins again. So, again, no hard feelings if you sat this one out.

But you missed some good television if you did.

Golf Channel took us to Orlando, where Dan Hicks and Peter Jacobsen quarterbacked a free-wheeling, feel-good medley broadcast. Freed from the pressure of showing important golf shots, they turned a two-hour broadcast into an interview carousel instead, tossing out to Steve Sands and Kay Cockerill and Gary Koch, who wrangled major champ after major champ plus their eager family members, the interviewees as young as 11 years old and as experienced as 87, while we got to see golf’s biggest names as fathers and sons and mothers and daughters.

Lee Trevino is 83 and looked as delighted to be there as anybody. He loves being around Tiger Woods and trading swing thoughts with Charlie. He’s blown away by the depth of the field and made sure to remind title sponsor PNC that the tournament has become “the greatest thing they ever fell into in their life.”

And hoo boy, does he love golf.

“Every day,” he said, and explained why. “Look, I never had a choice. When I was a young man, with my educational background, this is the only thing that I could do and do well. And the Good Lord gave me a tremendous amount of talent and I don’t want to disappoint him when I see him. That’s No. 1. No. 2, I have no other options. I can’t do anything else. I could look for balls… but I love it, I do. I go out every day. I hit balls for an hour, maybe two. I chip and putt.

“I don’t play much anymore,” he added. But if there was any wistfulness, he breezed past it. “I love the game. Still love it. Can’t play it nearly as well, but I love it.”

This week’s only contestant older than Trevino is 87-year-old Gary Player. He played all the hits in an interview of his own: The importance of lifting weights. The fact that soon, someone will drive the ball 500 yards. The claim that he still travels more than anyone else on the planet (!). He, too, stressed how grateful he felt to be here.

“It’s an education,” he said, “and I cannot think of a better way of living.”

The youngest contestant got in front of a mic, too. Annika Sorenstam’s son Will is an 11-year-old left-hander with a smooth short game and no shortage of on-course personality. He learned his club twirl from Tiger Woods, he said. As for the way he walks in putts?

“If I see it on a good line, I just start walking,” he said. Simple as that.

John Daly was there, too, defending his title before he gets his knee replaced next Wednesday. He had advice for his son — “do the opposite of your daddy, and you’ll be just fine” — but appreciative for the moment, too, calling it “a wonderful ride.” With his own Daly flair, of course.

“If I knew that I was going to live this long I would have taken worse care of myself,” he said.

Mark O’Meara was asked how often he’s reminded of 1998, when he won the Masters and the Open Championship in the same season.

“Not enough,” he said with a laugh.

But Padraig Harrington, one of the game’s great talkers, said he’s enjoying basking in his past accomplishments.

“Everything is a reflection on when you were in your good days,” he said. “It’s rather nice.”

Still, he balked at the assumption that he’ll be playing mostly PGA Tour Champions events come 2023. Harrington is keenly aware that if he wins on the DP World Tour or the PGA Tour this coming season he’d be among the oldest to have ever done so.

There were pros in their prime around, too. Nelly Korda has been busy; she teed it up at the QBE last week and got one day off before prep began for the PNC. She’ll make sure not to see a course next week, she said, when all the Kordas get together.

“It’s been really cool to see the kind of feedback that I’ve gotten from the guys,” she said. “They should come out to an LPGA event and watch all the girls play out there because they’ll be equally impressed with everyone out there.”

Justin Thomas is a brand-new husband; between his wedding and a trio of December events — the Hero, the Match, now the PNC — he’s been a busy man.

Jordan Spieth is still a relatively new father; he dished on the latest with Sammy Spieth. “Happy kid, good sleeper, what more could you ask for?”

Their fathers spoke to camera, too. Mike Thomas said his golf preparation involved more fishing than he’d initially planned and joked that his son’s swing advice is “a long list.”

“More of a notebook,” Justin added.

Shawn Spieth, meanwhile, reminisced on how much his talented golfing son had fended for himself as a youngster. That ended up helping him down the road.

“Once he was out here professionally it was second nature to him,” he said, adding that Spieth felt very little pressure from his parents. “It’s not like Chris or I competed on the highest level, so it’s not like they had to follow us,” he said.

Oh, right. There was another famous father on property, playing alongside his son. Those of you that did flip on Golf Channel might have done so with the intention of catching a glimpse of the tournament’s two headliners, the Woodses, 46-year-old Tiger and 13-year-old Charlie. They limped around the course side by side, the elder Woods battling plantar fasciitis plus [gestures generally] and his son fighting through some growing pains.

Tiger gave us some flashback moments as he carved spinny wedge shots around the greens, dialing in his short game. And he gave us some new looks, too, like Tiger the Golf Dad, taking a wide stance to capture his son’s swing down the line and then reviewing the iPhone footage immediately thereafter.

“That’s a perfect, perfect backswing,” Tiger told Charlie. “You’ve never been there. How awesome is that?”

After their round concluded, Golf Channel cut to Woods’ press conference. One answer — to a question asked by our James Colgan — stuck out: Has the way he thinks about his legacy changed this season?

“Yes. Yeah,” Woods said. “The golf ecosystem has forced everybody to rethink how we look at the game and how we need to make the game better. So this whole year, for all of us who have been a part of golf, we’ve had to look at it from a different lens.”

He was talking about LIV Golf, of course, and its effect on the entire pro game. Within the hour, multiple bits of LIV-related news hit: the New York Times reported that the breakaway league’s COO had stepped away, all while LIV and the PGA Tour clashed in court and called each other liars.

The PNC isn’t immune to the effects of the outside world. Take Henrik Stenson, whose LIV defection likely cost him a return invitation this year. But this is a one-off, a celebratory golf tournament, where participants play from four different tee boxes just to make sure everybody has a good time. It’s an enjoyable bubble involving the who’s-who from the golfing world. There are no world ranking points at stake. More to the point, there are no debates about world ranking points.

That’s not to say it’s not important, though.

“The last couple years have been magical,” Woods said. “And to be able to do it gain, we’re looking forward to it.”

Should make for good TV, too.