For PGA Tour vs. LIV, this was the week things got personal | Monday Finish 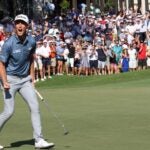 Will Zalatoris celebrates after making a putt Sunday at TPC Southwind.

On Tuesday afternoon, a group of high-profile PGA Tour pros and agents gathered ’round a screen in the locker room at TPC Southwind. Rory McIlroy was there. Jon Rahm, too. Will Zalatoris. Each of them was hanging on the words of one Judge Beth Labson Freeman, who was ruling on an emergency temporary restraining order that would allow three LIV pros — Talor Gooch, Matt Jones and Hudson Swafford — to rejoin the playoffs. The assembled pros all agreed on one thing: The PGA Tour could use a win.

Until this week, the idea of LIV vs. the PGA Tour was somewhat abstract. It was real in the eyes of fans and media, of course. But the players had adopted a relatively united front; this wasn’t personal, it was business. They’d shared locker rooms for years, after all. Those ties take time to untangle. But a lawsuit can speed things along.

“I certainly have a little more respect for the guys that haven’t put their names to the suit. So yeah, I mean, it’s become a little more personal because of that,” said Rory McIlroy ahead of this week’s FedEx St. Jude Championship.

“It was personal to me from the beginning, but I just — I would say it’s just getting more and more in depth,” added Justin Thomas. “It’s kind of like I said from the start, those guys were given an opportunity to go play and just go play. You can have your cake, but you don’t get to eat it, too. And they got their fair share of a large, large amount of cake and go eat it by all means. You don’t need to bring it onto our tour.”

“Having 25 guys all around an iPad on Tuesday shows you how much we all care and how much we love this tour,” Zalatoris said on Saturday.

McIlroy said he felt “a lot of nerves” as the judge arrived at the verdict. Zalatoris said the group was “pretty relieved” when it came down that the three LIV players applying to play the FedEx Cup Playoffs — Talor Gooch, Matt Jones and Hudson Swafford — wouldn’t be allowed to compete.

The steady drip of defections to LIV had meant the breakaway league has seized news-cycle momentum. Waves of defections gave the impression that players just keep leaving, dealing one loss after another to the establishment Tour. But on Wednesday, after the verdict came down, players acknowledged that it was nice to get a win.

Billy Horschel called it “just a small vindication at this point, because it’s not over.” But he was adamant that the victory represented a rift between LIV and the Tour that isn’t going away.

“I’ve said to some of the guys personally, I think they’ve been brainwashed,” Horschel told Golf Channel before his first round. “The way they feel so adamant that they’re going to be back on the PGA Tour. I’ve had some of them tell me, ‘I’ll see you on Tour again.’ I said, ‘No you won’t.’”

Every week has now become a measuring stick, but this week meant something extra. This is a significant part of what the PGA Tour is protecting, after all. FedEx is its mega-sponsor. This is the first event of the playoffs. The Tour’s best horses were all assembled for a race. Now they’d won a small victory in court. The quality of its product would suddenly be under extra scrutiny.

So it wasn’t great for the brand when Rory McIlroy, Scottie Scheffler and Jordan Spieth all missed the cut. Nor was it an obvious win when a relatively anonymous crop of pros led through 54 holes including J.J. Spaun, Sepp Straka and Trey Mullinax.

The biggest storylines through three-and-a-half rounds featured some mix of speculation, conspiracy and LIV. Cameron Smith’s no-comments when asked about his playing future in a Tuesday press conference led only to more questions. When Scheffler walked in front of him on a green during Thursday’s first round and Smith shot him a quizzical look, eager social media users jumped on it as a sign of the culture war. (It wasn’t; Smith and Scheffler laughed it off and almost staged another “incident” on Friday.) And Sunday morning Smith was retroactively handed a two-stroke penalty based off an improper drop he’d taken early in Saturday’s round. That, too, seemed more nefarious on the surface. (You can debate the tardiness of the call but not the validity of Smith’s violation.)

By week’s end, the PGA Tour did what it is set up to do: deliver an entertaining product en route to crowning a deserving champion. In this case, it found perhaps the most deserving champ of all. Will Zalatoris finished second place at last year’s Masters. He finished second place at this year’s Farmers. He lost the PGA in a playoff. He was one roll away from getting into another playoff at the U.S. Open. His resume was missing just one thing, and on the third playoff hole on Sunday, he filled that hole, too, pouring in a seven-foot putt and launching into a celebration that was part exuberance, part relief, all emotion as he shed tears beside the green.

“This is why we practice,” Zalatoris told the assembled media afterwards. “This tournament’s been here for 60 years. I was actually here earlier this week at Colonial Country Club and seeing Al Geiberger shoot 59, this tournament has some history to it. You know, every week that we’re out here there’s some story of history. I’ve wanted to chase history my entire career.”

Paul Azinger chose a pointed quote with which to sign off the broadcast.

“I can tell you, there is no amount of guaranteed money that can buy what he’s feeling right now,” he said.

Since we’re doing an abridged version of this week’s Monday Finish let’s keep it quick and run through a few golfers who deserve a shoutout.

There was Chambers Bay itself, which showed tremendously in its biggest appearance since the 2015 U.S. Open.

There was Miguel Angel Jimenez, who said he would plan to celebrate his win at the Boeing Classic in style.

“Good cigar, of course. Good wine, good cigar — everything good, you know. The life is too short to have bad things.”

There was Maja Stark, who won the ISPS Handa by five shots thanks to a final-round 10-under 63 that set a course record at Galgorm Castle in Northern Ireland. The win earned her the right to join the LPGA Tour. It was also a unique event because it was played concurrently with a men’s tournament on the DP World Tour. There was also Ewen Ferguson of Scotland, who won on the men’s side.

Tony Finau‘s winning streak came to a close but he logged a T5 finish alongside a group of big-timers including Jon Rahm, Collin Morikawa and Matthew Fitzpatrick. Sepp Straka lost in a playoff but snapped a streak of horrendous play and seemed generally thrilled with how the week had gone. And Wyndham Clark survived a double on 14 and bogeys on 16 and 17 to barely sneak into next week’s field: His final-round two-over 72 left him in 70th place in the FedEx Cup standings, eligible for the BMW by a tenth of a point.

We’ll see you next week!