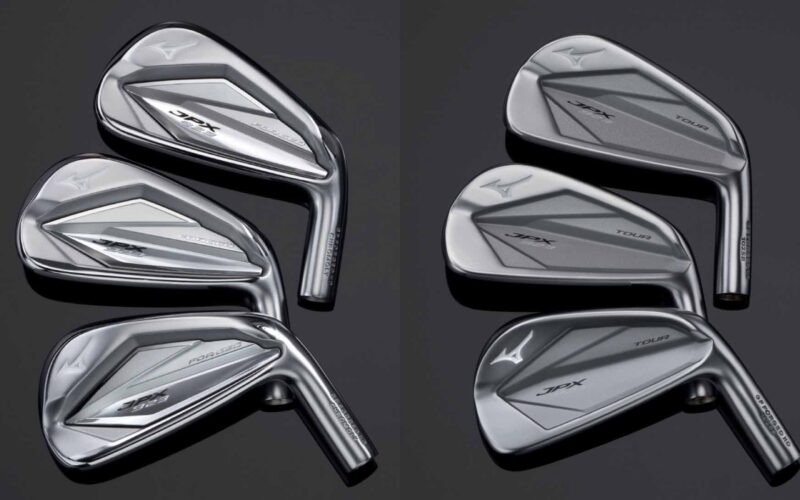 After much anticipation and teasing, Mizuno is officially unveiling the all-new JPX923 Forged and Tour irons, built to push the boundaries of materials, forgiveness, and tour-level precision shot-making.

The new Tour and Forged irons round out Mizuno’s JPX923 iron lineup, which offers their most comprehensive fitting program ever.

“The new JPX923 series was planned out with Mizuno’s custom ethos at its core. We already offer more than 50 unique shafts within our custom program, by expanding to five iron models, there’s an ideal combination for every type of player.”
—David Llewellyn, Director of R&D for Mizuno

When most golfers think about Mizuno, they think of forged irons, and when Mizuno puts the word “forged” on an iron — they mean it.

Rather than resort to using multiple materials to make a fast and forgiving player’s iron, Mizuno engineers opted to look at different materials to create speed without sacrificing feel.

To do this, the JPX923 Forged is comprised of two different materials throughout the set. The 4-7 irons use a forged 4120 Chromoly, which allows the expansion of the milled pocket in the cavity and a thinner club face to increase ball speeds and subtly boost MOI. On the other hand, the 8-GW are forged from the same 1025E Pure Select mild carbon steel as the JPX923 Tour irons for precision and control.

“The new JPX923 Forged pulls off two impressive achievements. First, it feels more solid even though it’s faster from the face. Second, it looks sleeker with a thinner topline and narrower sole even though it plays like a more forgiving club”
—Chris Voshall, Mizuno’s Director of Product.

To put into perspective what the new material allows engineers to do with the face and cavity of the JPX923 Forged, the face thickness is now just 2.2 mm behind impact compared to 2.6mm in the previous JPX921 Forged. In a world of fine-tuned manufacturing, four millimeters is a lot!

To enhance the JPX923 looks from address, the irons have a thinner top line through the entire set, as well as a more compact blade length into the 8-iron to the gap wedge for improved turf interaction and combo set blending.

Forged player’s cavity back irons are all about offering precision control, with confidence-inspiring looks and feel. Since the first iteration of the JPX Tour iron with the original JPX900 series, Mizuno engineers have been constantly tweaking the designs based on player feedback to deliver on the promise of performance, and once again they are upping the game when it comes to feel.

Just like with the recent MP (Mizuno Pro) irons including the 221, the new JPX923 Tour irons are incorporating a copper underlay to go along with one-piece Grain Flow Forged 1025E Pure Select mild carbon steel construction. This Copper underlay which was made famous in iconic Mizuno irons like the TN-87’s offers a more compressed acoustic at impact to create an even smoother feel.

“The goal was to engineer a compact, players cavity back that looked and felt like a muscle back at impact. With the copper underlay and new topline, the JPX923 Tour is right there.”
— David Llewellyn.

Other enhancements to the design of the JPX923 Tour include a redesigned V-Chassis to distribute mass away from the center of the head to increase stability, a thinner topline and more compact scoring irons (6-GW) for better shot-shaping control and turf interaction.

When engineers are designing wedges they are out to maximize two very important parameters — spin and versatility.

The new S23 wedges from Mizuno achieve maximum spin thanks to the loft specific quad cut grooves milled into the Boron-infused 1025 mild carbon steel and Mizuno’s laser-etched HydroFlow Micro Grooves to channel moisture away from the impact zone faster for reduced spin loss in wet conditions.

The second part of the spin and versatility equation is the S23’s unique cavity shaping and profile overhaul. The wedges optimize a shorter hosel and a heel side to push an extreme amount of mass towards the toe. This toe-sided pad creates a perfectly centered sweet spot for great trajectory control on shots hit all over the face and less deflection at impact which is a result of the higher MOI.

“That check and spin you see from the pros isn’t purely because of newer grooves – most of us don’t have the consistency of strike to get that kind of action. For the vast majority, a centralized sweet spot makes it much easier to find and get that repetitive spin control.”
—David Llewellyn, Director of R&D for Mizuno.

Want to overhaul your bag for 2023? Find a fitting location near you at GOLF’s affiliate company True Spec Golf.