Even in a blowout, the Presidents Cup found its ‘surreal’ signature moment 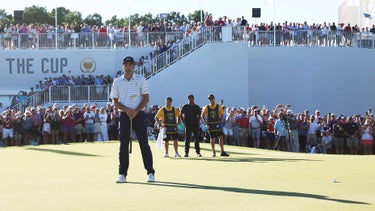 An unforgettable moment on the 18th green became the instant highlight of this year’s Presidents Cup, thanks to Max Homa.

An unforgettable moment on the 18th green became the instant highlight of this year’s Presidents Cup, thanks to Max Homa.

CHARLOTTE, N.C. — There’s something different about going out last.

The first groups at golf’s biggest team events are the main attraction. Fans breathlessly await their arrival. They meet them at the range, roar at them on the 1st tee, line the ropes on every hole that follows. The process of determining who should leads the charge is considered vitally important; these first groups have the chance to set the tone for the day. But going last? You’re the caboose. By the time you’ve arrived, everyone else is either gone or planning their escape.

As Max Homa finished up his range session just after noon on Friday, just a handful of fans were still in the bleachers. The rest had staked out the first tee or dispersed throughout the first few holes. The Americans’ star-studded pairing of Justin Thomas and Jordan Spieth had gone out first, bringing the Charlotte faithful along with them. The final match played on in relative anonymity, forgotten at the back of the train. Going out last just doesn’t have quite the same juice.

As the day wore on, the early matches began to finish. As they always do, fans from those groups gravitated towards the remaining groups. The players who’d finished consolidated around the remaining matches, too, accompanied by their captains, families and support staff. The attention grew. The tension grew with it.

A large crowd had gathered by the time Homa stepped up to a 13-foot birdie putt on the 17th hole on Friday. His U.S. teammates had already established a sizable lead over the Internationals, 7 points to 2, but this final match was still tied and still important. Lose and the margin would swing to 7-3, a reasonable gap to make up over the weekend. Win and the gap would jump to 8-2, a seemingly insurmountable margin for an outgunned International squad.

Homa poured it in the middle. 1 up.

The group headed to 18. Every other match had finished now, which meant the entire cadre of U.S. team members were gathered to the right of the green, a massive crowd stretching out behind them. They smelled of sunscreen, sweat and $11 Michelob Ultra. The 489-yard finisher was playing long; through two days, nobody who’d reached the hole had made birdie. But Pendrith made it look easy, sending a towering iron from 219 yards to 13 feet, setting up a great look to the back-right hole location.

Homa had carried the adrenaline from the 17th green into his tee shot on 18, blistering one uphill and into the wind all of 302 yards. He hit after Pendrith and did one better: His iron shot just carried the edge of the right bunker, trundled forward and stopped just 11 feet short of the hole.

With Horschel and Conners facing par putts, Pendrith stepped onto the stage first. The Canadian’s best-known weapon is his potent driver, but his putter withstood the pressure of the moment: his ball never left the center of the hole. He let out a yell as the crowd gave a muted cheer, appreciative of the achievement if not happy with the result.

Then came Homa, who now faced a putt to win. He straddled his line. Studied the break. Slowed things down.

“It was pretty surreal. The atmosphere out there is insane. There’s so many people, you can feel them on the back of your neck,” he said afterwards.

Then he stepped up, took a last look at his line and sent the putt rolling towards the hole. It carried a little too much speed — but on this line it didn’t matter. Of the thousands looking on, gazing intently into the fading sun, Homa was the first one who knew: It was in. By the time the ball crashed into the back of the cup and fell to the bottom, Homa had already broken the silence of the masses with a blood-curdling scream. The match was over. The U.S. was up 8-2. The Presidents Cup, even in a blowout, had found its signature moment.

There’s one other thing that’s different about playing in the final group: How quickly everything goes once you finish.

Homa and Horschel were whisked away for a TV interview. Then they boarded a golf cart to the media center. When Homa arrived there, he’d been separated from caddie Joe Greiner — but he was still holding his putter. He addressed the media, suddenly asked to put it all into context. How did that feel?

“I feel very thankful,” he said. “I’m not super, super close with anybody on this team, but I have always respected and gotten along with everybody, and it’s been amazing to watch these 11 other guys who are incredibly good, incredibly acclaimed, so many accomplishments, cheering us on coming down the stretch. I’ve been in the last match both days, and to be able to see that is special for me. The golf’s amazing, but you remember that kind of stuff well into your days. So I feel very thankful for that.”

As for the putt itself?

“I mean, I was nervous as could be over that putt, but it was fun,” he continued. “I was telling my wife, when we talk about things money can’t buy, money cannot buy that feeling. And that was something that I will remember forever, and I will tell anybody who ever wants to hear about it how that felt.”

It was a fitting summation of the day and, thus far, the entire competition. A back-and-forth match that came down to the wire and, ultimately, went the way of Team USA. Through two sessions, eight out of 10 matches have made it to the 17th hole. But the U.S. side has the edge in those eight matches, winning five, losing one and tying two. (Human buzzsaws Xander Schauffele and Patrick Cantlay have taken care of business in the other two matches, winning 6 and 5 and 3 and 2.) The International team has been competitive in individual matches — but in aggregate, the stars and stripes have built a commanding advantage.

“These moments where matches flip, it just seems like we’ve been on the right side of those for the margin to be where it’s at,” Spieth observed.

If the blowout continues, there will be hand-wringing about the future of the Presidents Cup. If it’s not competitive, critics will say, what’s the point? But there’s no denying the significance of Friday at Quail Hollow. Take testimony from Horschel, who was asked if his first U.S. team match lived up to the billing:

“Yeah, even this morning lived up to it. I woke up this morning and felt like I had to throw up for three hours straight,” he said. “It was the most nervous I’ve been ever before any round of golf in my entire life. I think it’s just the anticipation of wanting to be on these teams for so many years and missing out and finally making one.”

“When I finally started warming up, that feeling finally went away. Yeah, it lived up to everything that I expected.” He pointed to Homa. “And to see this guy right here perform at the end was truly special.”

Perhaps the Internationals will stage a furious comeback. After all, just 10 of 30 total points have been doled out; eight more are up for grabs on Saturday and 12 more come Sunday. But if not, this cup already has its moment. Homa’s putt left its mark.