Charlie, Tiger Woods interviewed on TV, and it was 7 minutes of eye rolls, jokes, jabs 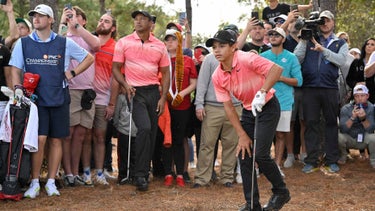 Charlie and Tiger Woods were interviewed on NBC after play at the PNC Championship, and it was 7 minutes of eye rolls, laughs and jabs.

Charlie and Tiger Woods were interviewed on NBC after play at the PNC Championship, and it was 7 minutes of eye rolls, laughs and jabs.

Over two years and three appearances at the PNC Championship, the end-of-the-year event that pairs major winners with a family member, you’ve zeroed in on one of the 20 groups maybe more than the others, right? It’s reasonable. How would Charlie Woods hit? How would the now-13-year-old putt? Does he fist-pump? Is there swagger? And we got our answers — well, well, yes and yes. Kinda like his old man, Tiger, the 15-time major winner.

We’ve heard some from him — hot mics have picked up bits and pieces, there were a couple interviews at junior events. But at the PNC, Team Woods was a solo act on the mic; elder Woods, understandably, shielded younger Woods. Then father and son shot a 13-under 59 during Saturday’s first round at the Ritz-Carlton Golf Club. That’s just two back of the lead, and they’ll play in Sunday’s final pairing. And your television came out of a commercial break with an NBC camera light on Tiger and Charlie, and interviewer Steve Sands nearby.

What follows, of course, is not exactly a revelation. Many of us sound like our moms and dads. But it’s … well, what was it, Peter Jacobsen?

“I’ve been involved in the Tour now 46 years, and I’ve watched Tiger grow up in the game,” the NBC analyst said afterward. “That was one of the coolest moments I’ve ever seen, watching Tiger and Charlie right there. You saw the dynamic between father and son, competitor and legend. That was really a great interview.

“I don’t know if everyone else agrees with me, but that was a cool moment.”

Here’s what Team Woods — both of them — said.

With nearly identical deliveries, too.

The opening — and the dad joke

Editor’s note: Both Tiger and Charlie were hurting Saturday — Tiger is battling plantar fasciitis in his right foot, an extension of injuries to his right leg; Charlie rolled his ankle, according to NBC analyst and family friend Notah Begay — but they played on, grouped with Team Thomas — Justin and his dad, Mike, who are round 1 leaders — and their bags carried by Tiger’s regular caddie, Joe LaCava, and his son, Joe Jr. Unofficially in this sequence, there are four eye rolls from Charlie, then a head drop after dad’s dad joke.

Charlie: I mean, it was super fun. And just being out there with the Thomases and the LaCavas, it was just a great time. And the atmosphere was just amazing.

Sands: Tiger, how much does this guy amaze you out there?

Tiger: Yeah, you. [Laughs.] No, obviously it was a great day. We got on a little bit of a heater there in the early, middle part of the round. We didn’t take advantage towards the end, but we’re in a great position for tomorrow.

Sands: We know that Charlie is going to replicate everything that his father does on a golf course. We did not think he would replicate the limping around. [Charlie eye rolls.] So how difficult was it for you as a father and a competitor to see all this?

The highlights — and a disagreement

Editor’s note: Sands goes through a batch of Tiger and Charlie highlights. On 13, a short dogleg left, Charlie had hit into a right bunker, while Tiger had tried to cut the corner and drive the green, and his ball ended up in pinestraw to the left of the green. The event being a scramble, teams can choose whichever ball they like and proceed, and Team Woods picked Tiger’s. To some disagreement.

Sands: Now at 13, this was the shot of the day as far as we were concerned.

Sands: What are you, 13? Father will be overruling you for quite some time.

[Another highlight is played.]

Sands: So as you guys make your way and go about your business around the golf course, and you have disagreements like all fathers and sons have, but this is a little bit of a different fray — you’re not at home, where nobody’s watching and all that. How do you handle something like that? Let’s start with the kid first. You can keep that smile going [he says to Tiger]. How much can you push your father out there competitively?

Charlie: I mean, I push him as hard as I possibly can.

Charlie: And once he pushes back, then I know I can push a little bit more and then I’m done. Then I know it’s going to get heated.

Sands: You have multiple children; you know what it’s like; you have a boy and a girl. What is it like dealing with him when he’s giving you some oomph.

Tiger: I don’t mind the oomph. But there’s a line to it. [Charlie laughs.] As he knows. [Tiger and Charlie laugh.] I’ll end the line right there. And as he tries to push a little bit beyond that, but that’s where the line is.

What is it like to be Tiger Woods’ son?

Editor’s note: Tough one. Here’s Charlie. He answered it well. And a follow-up nearly brought Tiger to tears.

Sands: Last couple of years, Charlie, we’ve talked to Tiger, and how proud he is of you and what it’s like to play with you. How about on the other side? What’s it like being Tiger Woods’ son and being able to be around your father, like all normal kids are, but yours is a little bit of a different circumstance.

Charlie: I mean, it’s cool seeing how much he’s worked to get to where he is now. And I wouldn’t really say how bad it was, but how much he pushed through. It was just really cool to see.

Sands: How much did he and Sam [Tiger’s daughter] motivate you to get back to where we’re standing right here?

Tiger: Each and every day. Each and every day. Just to be able to see their faces and see their smiles and to hear their words of encouragement. I’ve had some tough days, as he’s known, but just to have their support and their love — you know, I’m not going to get teary-eyed here — but it has meant so much to me to be able to get to this point in life. And forget the stage that we’re playing on, but just to get to this point in life.

One more dad joke and one more eye roll

Editor’s note: To end things, another Tiger dad joke. And another Charlie eye roll. Makes you wonder what happens at home in Jupiter, Fla.

Sands: You guys are going to be playing in the final group together with your good friend Justin Thomas and Mr. Thomas. How much of an advantage is it for you guys to play again together and to also play with a couple people who you’re very familiar with?

Charlie: It makes it a lot less nerve-wracking in the final stretches because we always throw shots at each other. And it’s just very fun.

Sands: I know you guys like to talk a lot of smack. The Thomases are very close. We both know how close you are with Justin — almost like a brother — and Mike Thomas is almost like a pseudo father to you.

Sands: How much yapping will there be out there tomorrow when you guys are both out there trying to win. Because you’re both only two back.

Tiger: It’s literally nonstop. It starts pre-round. Before we even got here, the texts were flying. And then warmup, the jabs were coming out. And then throughout the round, there were jabs, there were a couple notes left here and there, a couple things said that we love. But between now and then, the Woodses are Team Ice Bath. [Charlie eye rolls.] So that’s where we’re going.

And the cameras shut off.