Charlie-proofing? Here are the backed-up tees Charlie Woods will play at the PNC 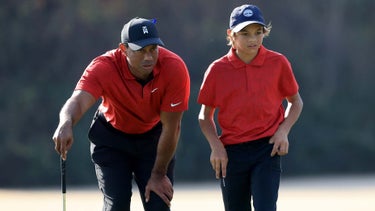 Has the Charlie-proofing begun already? Tiger Woods’ 13-year-old son will play a lengthy course at this week’s PNC Championship.

Has the Charlie-proofing begun already? Tiger Woods’ 13-year-old son will play a lengthy course at this week’s PNC Championship.

Seems like tournament organizers have been watching Charlie Woods swing videos, too.

On Wednesday, Golf Channel’s Todd Lewis reported that Tiger Woods’ 13-year-old son Charlie — who is the elder Woods’ partner at this week’s PNC Championship — will be moving back a tee box this year. Now he’ll be just one tee box in front of Tiger and, according to Lewis, will play a course that stretches to nearly 6,600 yards.

The PNC is a 20-team tournament in which major champions play alongside family members in a two-day scramble. A wide variety of ages and abilities means they need different players teeing off from different places. And while officials haven’t released complete details about tee boxes for the tournament, we can glean some information from last year’s setup, which consisted of four categories. Here’s how that looked:

That means that a year ago Charlie Woods and Karl Stenson (son of Henrik) — the event’s two youngest competitors — teed it up from just more than 6,000 yards. In Charlie’s case, that meant the ability to blast it well up the fairway, which proved beneficial to his injured father.

Charlie’s still just 13, but tournament organizers appear to be moving the goal posts (the tee boxes, in this case) in an effort to keep up with the youngster’s big-time swing speed. Charlie will join LPGA pros and seniors at the 6,600-yard tees this year, which means he’ll be alongside the likes of John Daly, Nelly Korda and Vijay Singh.

If that seems a bit outlandish, perhaps PNC organizers were watching last week’s Match, during which Tiger admitted that his son has now driven it past him.

“I hate to say it, but I’m going to admit it. He finally did it a few weeks ago,” Woods told TV cameras at Pelican Golf Club. “I spun one, he tomahawked one and got me.”

Woods also admitted at the Hero World Challenge that he’s told Charlie to emulate Rory McIlroy, arguably the best driver on the planet.

With Team Stenson not playing this year’s event, the youngest competitor is expected to be Will McGee, Annika Sorenstam’s son. The 11-year-old got a chance to meet Woods at the Match.

You can see the complete PNC Championship first-round tee times below.