Charles Barkley opens up on potential LIV offer, says ‘we all have sportswashed’ 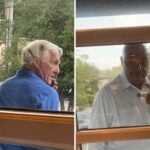 Charles Barkley, who once made his money as a basketball player, has given little doubt what he would do if offered the figures reportedly being tossed out recently to golfers.

“Listen, if someone gave me $200 million,” he said last month in an appearance on the Pat McAfee Show, “I’d kill a relative,”

Greg Norman appears to have heard.

Barkley, the NBA Hall of Famer, NBA analyst and much-lampooned golfer, confirmed in an interview with the New York Post that he had dinner with Norman on Wednesday to discuss a broadcasting role with Norman’s controversial, Saudi-backed LIV Golf Invitational Series. While Barkley said he and Norman only talked, he did commit to play in the pro-am of LIV’s next event, to be played next week at Trump National Golf Club in New Jersey.

Barkley, the Post reported, is under contract with Turner Sports for three years and $30 million, though he told the newspaper that he could also work for LIV.

“In a perfect scenario, I would love to do both,” Barkley told the Post.

In the interview, Barkley also revealed strong thoughts on the concept of ‘sportswashing,’ saying, “We have all taken ‘blood money’ and we all have ‘sportswashed’ something so I don’t like those words, to be honest with you. If you are in pro sports, you are taking some type of money from not a great cause.” LIV is supported by Saudi Arabia’s Public Investment Fund, and the PIF serves as the financial arm of the Saudi government, which has committed numerous human-rights violations.

But Barkley also told the Post that his sponsors reached out to him after hearing he was meeting with Norman.

“Between [my Turner contract] and all my commercials, for me to risk all of that, it would have to be some serious money thrown my way,” Barkley told the Post.

Stay tuned then. Of course, a big-money inclusion of a basketball player and analyst to a golf broadcast may surprise, though Barkley’s love of the game is well-documented and he’s played in and announced for the Match series.

The Barkley-to-LIV conversation started publicly during his Pat McAfee Show appearance. It was recorded during the second round of the U.S. Open, and Barkley said: “I want all the LIV guys on top of the leaderboard. I want to see the PGA Tour shaking in their damn boots. Listen, I’m not a religious dude, but I want chaos this weekend at the U.S. Open.”

“I think I looked at the board: Dustin’s the only one in contention,” he also said on the show. “I would love to see Dustin against Rory and Justin Thomas because, man, that would be so awesome for TV. Because like I say, I don’t judge other people. Listen, if someone gave me $200 million, I’d kill a relative.”

A week ago, while the Open Championship was being played, Barkley then appeared on the Next Round show, and, after being asked to confirm a rumor that LIV was pursuing him for an analyst spot, Barkley did.

“They called me and asked me would I meet with them and I said yes,” Barkley said on the show. “Nothing is imminent. I actually don’t know everything they want from me, or what they technically want me to do. But you got to always look at every opportunity that’s available. So the answer to your question is, 100 percent, yes, I’m going to meet with LIV.”

The Post and Next Round both talked to Barkley afterward, and Todd Schuster of golf site No Laying Up tweeted out pictures of Norman and Barkley from the meeting, which you can see in the image at the top of this story.

LIV, which broadcasts in the U.S. on its home page, Facebook and YouTube, has an announce team of play-by-play man Arlo White, analysts Jerry Foltz and Dom Boulet and on-course reporters Su-Ann Heng and Troy Mullins. The New York Post also reported this week that analyst David Feherty was leaving NBC for LIV.