Can anyone beat Xander Schauffele and Patrick Cantlay? 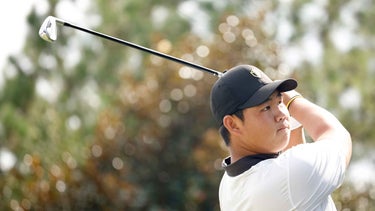 After years of match play inconsistency, the U.S. has found an indomitable pairing in Xander Schauffele and Patrick Cantlay.

After years of match play inconsistency, the U.S. has found an indomitable pairing in Xander Schauffele and Patrick Cantlay.

CHARLOTTE, N.C. — You could forgive Xander Schauffele and Patrick Cantlay for making a mess of Quail Hollow’s 14th hole. It took until 4:19 p.m. local time on Friday afternoon for either of them to see it for the first time all week.

Team Schauffele/Cantlay reached the 14th in a state of euphoria. They were 5 up with five holes to play, and needed only to find the putting surface on the 223-yard, lake-defended par-3 to close things out. The two players — ranked 4th and 5th in the world, respectively — walked arm-in-arm, smiles plastered on their faces. Once again, they had utterly dominated their match-play opponents. Soon they would be basking the glow of another shared victory.

But then something odd happened. After a short conversation, Cantlay swung first, a skyball that started off the toe of the club and ended short left of the green. Then came Schauffele. Another mishit, this one starting right and careening off a bank into a collection area.

Their opponents, Hideki Matsuyama and Tom Kim, both found the green with their tee shots. A few minutes later, Schauffele and Cantlay watched as Kim poured in his birdie putt to extend the match.

“Pat and I, unfortunately, normally one of us will save each other,” Schauffele said later of his pairing’s effort on the 14th. “But we hit two of our worst tee shots all week on the same hole.”

Can anyone stop Xander Schauffele and Patrick Cantlay? Goodness, it doesn’t look that way.

At the Presidents Cup, Schauffele and Cantlay have not just beat opponents, they have embarrassed them. It’s the continuation of a growing trend for the uber-talented friends, a pattern that has them morphing quickly into the United States’ most lethal match-play pairing.

On Thursday, Schauffele and Cantlay stuck an early knife in the Internationals hopes in their first match against their opponent’s only experienced pairing, Matsuyama and Adam Scott. In a sign of confidence, captain Davis Love III put Schauffele and Cantlay out first for the heavily favored Americans and offered a simple message: take care of business. The two golfers wasted no time getting to work, trading birdie after birdie until they walked off the course after the 13th hole with a 6-and-5 throttling.

“They don’t even need to talk to the captains anymore,” NBC Sports’ John Wood said Friday. “‘Just tell us our tee time for the first round and we’ll see you there.’ Just throwing more and more coal on the fire and when they get the train going, it’s unbelievable how good they play together.”

Of course, it hasn’t always been this easy. At the Presidents Cup at Royal Melbourne in 2019, captain Tiger Woods paired the two rookies together for much of team play. With the Americans on their heels in the opening days, their play sagged.

“We were sort of put in the fire there playing all matches,” Schauffele remembers. “We were both rookies there. We knew each other pretty well, but you get to know each other really well when you’re in these team rooms. Probably in Australia is when we became very close, and we continued our friendship from there.”

The friendship blossomed into a full-blown bromance at the Ryder Cup in Whistling Straits, where the two golfers went 2-0-0 together in a triumphant American win. On a historically topsy-turvy U.S. team, Schauffele and Cantlay were stronger than granite on the course, and tighter than anyone off it. Then came the 2022 season, the win at the Zurich Classic, the shared trip to Napa Valley, and, at long last, the Presidents Cup.

When they arrived at Quail Hollow, it was less of a question of “if” they would be paired together at the Presidents Cup than “when.” (“If it’s cool with you guys, we’re just going to run it back,” Love told Schauffele and Cantlay.)

“Our style of play is very similar,” Schauffele agrees. “Throw it to the fat part of the greens, try to take advantage of par-5s, low stress.”

Low stress, and very often, high reward. These are the benefits of sharing the same style and, it often appears, the same brain.

“I feel like Melbourne, we played all of the first four matches with each other,” Schauffele said. “Ever since, we’ve just felt really comfortable playing this format with each other. The New Orleans tournament this year kind of secured that feeling between the two of us, and we’re just going to ride that hot streak.”

Their bid for 7-3-0 will have to wait until at least Saturday afternoon at the Presidents Cup. On late Friday evening, Love announced he would not be playing Schauffele and Cantlay in Saturday’s morning foursomes session.

At long last, it seems, Schauffele and Cantlay have met their match: their captain.