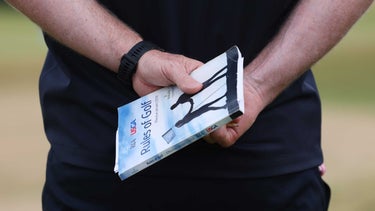 Bizarre confusion over the 15-club rule leads to the disqualification of pro Mark Hubbard during the Houston Open second round.

Bizarre confusion over the 15-club rule leads to the disqualification of pro Mark Hubbard during the Houston Open second round.

Mark Hubbard, after a sequence in which he reportedly believed his driver wasn’t working to his liking, will now be at home this weekend.

In short, Hubbard was disqualified Friday after the second round of the Houston Open due to a violation of Rule 4.1c, and that news was also the first sentence of a tweet from the PGA Tour Communications account early Friday afternoon. But the route to get there was no doubt bizarre.

To begin, Hubbard shot a five-over 75 during Thursday’s first round at Memorial Park, then opened Friday’s second with a four-over front nine. It was here, according to a message to GOLF.com from a Tour spokesman, where Hubbard added a new driver to his 14-club bag. And when he hit the 15th club, he was done.

You may have some questions here, and we’ll try to clear things up. Let’s start with the disqualification and the rule behind it. You can’t play with more than 14 clubs, and that’s covered by Rule 4.1b. The rule is layered, though. If a player learns of the violation during the round, they are to declare a club out of play, and “the player gets the general penalty (two penalty strokes) for each hole where a breach happened, with a maximum of four penalty strokes in the round (adding two penalty strokes at each of the first two holes where a breach happened).”

But what if a player knowingly adds a club during a round, like Hubbard did? Rule 4.1b begins to address this, saying “If the player added excess clubs during the round, those added clubs are the ones that must be taken out of play.” That leads us to Rule 4.1c, which covers the procedure for taking a club out of play. That rule states:

“When a player becomes aware during a round that he or she is in breach of Rule 4.1b(1), (2) or (3) for having more than 14 clubs or for making a stroke with another player’s club, the player must immediately take an action that clearly indicates each club that is being taken out of play.

“This may be done either by: Declaring this to the opponent in match play or the marker or another player in the group in stroke play, or Taking some other clear action (such as turning the club upside down in the bag, placing it on the floor of the golf cart or giving the club to another person).

“The player must not make a stroke for the rest of the round with any club taken out of play.”

In Hubbard’s case, according to the Tour, he did not declare the added driver out of play, and he hit it. And a violation of Rule 4.1c is a DQ.

But why would Hubbard play the new driver? An email to Hubbard’s agent was not immediately returned to GOLF.com, nor was a request to speak to a rules official, but according to a story from Golf Channel’s Brentley Romine, Hubbard said he was not getting the right spin he wanted from the original driver, so he made the move at the turn. Notably, Hubbard double-bogeyed his first hole on Friday after hitting into the right rough off the tee, hit into the right rough again on the third, fifth and eighth holes and was in the fairway on the fourth and sixth holes. (Holes two, seven and nine are par-3s.) After the switch, Hubbard hit four of seven fairways.

But didn’t Hubbard know about the rule in play? And the potential DQ?

According to the Golf Channel story, Hubbard believed he would be hit with just the four-shot penalty.

He then finished his round and was eventually told he was wrong.