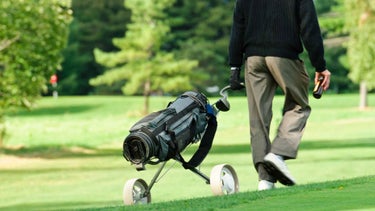 Love the content, keep it coming! Here in Columbus, we have what I would say is our premier local brewery, Land-Grant Brewing Company. The owner is a good friend of mine and an avid golfer. Since day one, they’ve had a beer on tap called Greenskeeper IPA. It’s seasonal now, so I’ll check and see when it will become available. Where should I send a 6’er?

The email had me at love. And 6’er. And with that, we also grew.

A year ago at this time, I undertook a spirited project: Could the best beers with golf in the name be rated? Yes, this was lighter than, say, a wheat beer. But it was fun, like a seasonal brew. We dug through all the various avenues — personal knowledge, websites, friends, family and colleagues — for insight, cooked up a top nine and sent it out into the universe. With a note.

But over the next year, as you imbibe from the beverage cart or the 19th hole, and you see something tastier sounding, please email me (nick.piastowski@golf.com), or reach out over Twitter (@nickpia). Bonus points if you want to mail me a sixer, of course. Then, around next year at this time, I’ll post the nine best.

And, among several others, I got the note above.

I meant the six-pack line in a bit of jest, but I agreed to the offer as part of an exchange, and in April, I had a Greenskeeper. We exchanged a few other messages. And then I had a second rater. I asked if this emailer wanted to join in on the fun too, and they were in. We grew. (I’m keeping the name private.)

Our newest panelist also offered a suggestion: How about a rating of the best golf-club brews? I liked it. And we’ve also tossed in a rating of best overall golf beers, though this category, along with the others, should be labeled as a conversation-at-the-bar starter, and not an end all, be all. Regionality plays a large role here, as does taste, and we’re just two golfers who also like their suds. So … if you think a beer should be in any of the ratings …

Please email me (nick.piastowski@golf.com), or reach out over Twitter (@nickpia). Bonus points if you want to mail me a sixer, of course. Then, around next year at this time, I’ll post the ratings again. Shoot, you could end up in the panel even.

With that, here are this year’s ratings. Cheers!

Best beers with golf in the name (top six this year, in alphabetical order)

Beer for Golf, a wit from Off Color Brewing in Chicago: Perfectly named. This one was recommended by several emailers over the past year.

Greenskeeper Session IPA from Land-Grant Brewing Company, Columbus, Ohio: We had to get our newest rater’s favorite in the list. A nice nod to the folks who keep our courses running, too.

Pin High Pilsner from Market Garden Brewing in Cleveland. Back for a second year. A portion of the beer’s proceeds will be donated to support youth golf educational programs at Cleveland Metroparks Golf Courses.

1967 Lager, for The Golf Club in New Albany Ohio, from Land-Grant Brewing Company: “An easy-drinking, lighter lager,” wrote our newest rater. “Great for the course, at the turn with beef jerky, or in the solid wood and stone clubhouse while being watched by the giant stag head.”

Bandon Dunes Pale Ale, for Bandon Dunes Golf Resort in Oregon, from Hop Valley Brewing Company: “Another wonderful pale ale that can be casually consumed walking the Pacific Cliffs, or in McKee’s Pub with a plate of their famous meatloaf,” wrote our newest rater. “Probably the first golf course-centric beer I had in 2017, and was more than happy to repeat the experience in 2020.”

Merion IPA, for Merion Golf Club in Ardmore, Pa., from Workhorse Brewing: “I don’t know if it’s because it’s poured out of a red wicker basket handle, or because I’m on cloud nine after walking the hallowed grounds of Merion, or because I’m in a daze after their world-famous showers,” wrote our newest rater, “but this beer, poured into a frosty cold mug, is a delight.”

The Ocean Course Pale Ale, for Kiawah Island Golf Resort in South Carolina, from Low Tide Brewing: “Quite simply the grand poobah of them all,” our newest rater wrote. “This is the best course-only beer I’ve ever had. Easy drinking, great beer taste, can drink a few or just one. Beautiful white can, with the beautiful Angel Oak logo front and center. It doesn’t get better than this beer.”

Heady Topper (double IPA), by The Alchemist, in Stowe, VT: My vote here. I needed a great post-round beer, and this beer is as lovely as they come.

Heineken (lager), by Heineken, in the Netherlands: We need a largely distributed beer on the list. And this reasoning from our newest rater puts Heineken on the list: “I like my beer to taste like beer, and of the commonly available beers, this is my favorite for the course. My dad drank Heineken up until he passed in 2018, and every time I crack a cold one, I cheers it to him.”

Spotted Cow (farm cask conditioned ale), by New Glarus Brewing Co., in New Glarus, Wis.: I’m a Wisconsin native, so you know where my feelings are — but this came from our newest rater: “Two things Wisconsin does well — beer and public golf. If you’re making a golf pilgrimage to Wisconsin, you need to be drinking this beer.”