At this Presidents Cup, Trevor Immelman made it easy to root for the other team 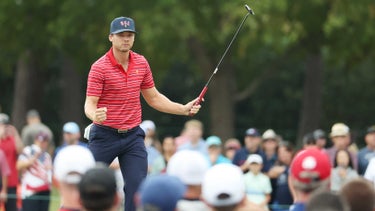 The U.S. won the Presidents Cup, but the way in which Trevor Immelman led his team made it difficult not to pull for him.

The U.S. won the Presidents Cup, but the way in which Trevor Immelman led his team made it difficult not to pull for him.

Trevor Immelman faced a Presidents Cup captaincy unlike any other. His side has always been the underdog in this biennial event, winning just once in its history. But this year, against the backdrop of LIV Golf’s unlikely rise, Immelman barely knew who would be on his team.

When players signed with LIV, the PGA Tour said those players could no longer compete in the Presidents Cup, which is run by the Tour. It was a bigger blow to the Internationals, who lost World No. 2 Cameron Smith, Joaquin Niemann, Abraham Ancer and Louis Oosthuizen, and perhaps even one to three more players. The Americans lost, perhaps, Dustin Johnson? And that was about it.

To make matters worse, Smith and Niemann left so late they had already auto-qualified for the team. The marketing posters were already made and everything.

“It’s been a giant pain in my ass,” Immelman said last month.

But this week wasn’t about them, the ones who left, Immelman reiterated. Constantly. It was about the players who wanted to be in Charlotte.

By now, you likely know how it all played out. The Americans dusted the Internationals again, winning 17.5-12.5 at Quail Hollow Club on Sunday. (Jordan Spieth was 5-0, Xander Schauffele smoked cigars. Blah, blah, blah — we won’t do Xs and Os here.) The U.S. continues to dominate the Presidents Cup, which is still in its infancy and trying to be a nice complement to the Ryder Cup and not so much its little brother. But the Internationals are trending.

There’s much credit to go around but surely some belongs with Immelman.

The 42-year-old South African and 2008 Masters winner was announced as captain before the pandemic hit and long before LIV was a thing he thought he had to worry about. The world’s different now, and so is the golf landscape. This Presidents Cup was different, too, for reasons already stated. But once players and captains and fans arrived at Quail Hollow, it was just a normal golf tournament again, with a bunch of guys on a private course trying to shoot the lowest score possible.

On his first day on site, and the first time he saw his team room, Immelman teared up. (That turned out to be a common theme during the week.) It was the realization of everything finally coming together; one of the first real hints that the week had arrived. Past hurdles be damned.

When the shots started to count, it wasn’t exactly the start Immelman envisioned. The Internationals lost the two opening session 4-1 and trailed 8-2 heading into the weekend. Social media was buzzing. Could this thing actually be over before Sunday?

“This team is no joke,” Immelman said on Sunday night, “and I’m sick and tired of it being spoken of as a joke.”

He spoke with authority and sounded like a man fed up, a captain defending his guys, which is exactly what captains, and leaders, are supposed to do. All week, Immelman carried himself with grace. Even the one time he broke character, taking a second to fire back at Greg Norman via social media, he wasn’t chastised for it. In fact, he received the opposite reaction. (He’s human! Of course he should be mad!) Sometimes you can have it all.

But the Presidents Cup script flipped on Saturday. The Internationals tied the morning foursomes session and won afternoon fourballs, cutting the deficit to four heading into Sunday. Four points is doable for a comeback. When it was all over, after Tom Kim made his winning putt on 18 to essentially hand the Internationals the session and steal the momentum, players and caddies celebrated on the green. Immelman did too, but eventually he returned to the putting surface long after everyone left. He was fixing blemishes on the green, making sure the team’s celebration didn’t do much damage.

“We are a group of random PGA Tour guys, you know, got together, started believing under one symbol,” said Sebastian Munoz, who won a singles match on Sunday. “You know, we had great guiding under Trevor and the co-captains, and it just took that little belief, a little trust, and we can do great things.”

But the U.S. had too much firepower. For moments on Sunday, it looked as if the Internationals had a path to victory, but those times were few and fleeting. Immelman said he still had hope late. He was probably the last one.

About an hour after Xander Schauffele clinched the Cup for the Americans, Christiaan Bezuidenhout beat Kevin Kisner to put a bow on the 14th Presidents Cup. During the closing ceremony near the clubhouse, Immelman made a few closing remarks. He looked at his team.

The feeling, one would think, was mutual.