At the Presidents Cup, plenty of little things don’t need any fixing 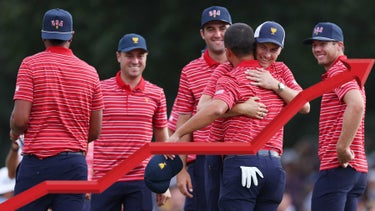 On the ground at Quail Hollow, it was clear exactly what the Presidents Cup means to the golfers competing.

On the ground at Quail Hollow, it was clear exactly what the Presidents Cup means to the golfers competing.

CHARLOTTE, N.C. — As the U.S. team was putting the finishing touches on its Presidents Cup victory Sunday afternoon, the winning captain of the previous Cup was nowhere to be found.

Tiger Woods was in touch with the action by phone, of course, but the winning skipper from the 2019 edition was at a different golf tournament. His was at Mission Hills in Central Florida, where he caddied for his 13-year-old son Charlie in a junior qualifier. Sunday was a good day for the U.S. team, which won the final session 6.5-5.5 and the Cup 17.5-12.5. It was a good day for Charlie, too: he shot 68, the low round of his young career.

Woods’ absence from Charlotte was a fitting reminder just how long it’s been since the last Cup. That was pre-pandemic. Pre-LIV. In Tiger terms, it was pre-crash. In presidential terms it was pre-Biden. In golf terms it was pre-Tom Kim, though with a twist: His caddie this week, Joe Skovron, actually was at Royal Melbourne in 2019, but on Team USA, looping for Rickie Fowler. Priorities in all our lives have changed since then. Charlie wasn’t playing qualifiers in 2019, just as one example.

After a U.S. blowout in 2017, the 2019 edition was a revelation. Royal Melbourne was an unmatched venue. Woods, who served as playing captain, was the star of the show. And the U.S. needed a furious rally in Sunday singles just to edge the home team, 16-14. Still, by the time competitors arrived in Charlotte at the start of this week, the question was swirling again: Should the Presidents Cup be overhauled?

Team USA lent some legitimacy to those claims by jumping to an 8-2 lead on Friday. But none of the 40,000 sun-soaked spectators seemed concerned in the slightest; they were there to cheer on their country and get an up-close look at the world’s best golfers in match play, its most exciting format (side note: the alternate-shot version is particularly good).

When the final putt of Friday’s session, an 11-footer from Max Homa, hit the bottom of the cup, the celebration that followed served as a reminder just how much this mattered. The Internationals outpaced the Americans over the weekend, too, winning 10.5 of the 20 points up for grabs on Saturday and Sunday to remind us just how narrow the margins are. There was a moment on Sunday, too, where the away team led in just enough matches to make people start to wonder. Could they do it?! International captain Trevor Immelman took notice.

“When you consider that we were 8-2 down on Friday evening, this team is no joke, and I’m sick and tired of it being spoken of as a joke,” he said on Sunday evening, rejecting the idea that this format needs undoing. U.S. captain Davis Love III agreed. “There wasn’t any talk from either of our teams, Trevor’s or ours, about changing the format,” he said. “I understand the calls for revamping the Presidents Cup; Team USA’s 12-1-1 record speaks for itself. But there’s plenty that’s special about the tournament as it is, too.”

There are the electric team matches. Where else do you get players rooting for each other in the same group? You might get glimpses from watching Ryan Palmer and Jordan Spieth in the Zurich Classic, or John Daly and Little John in the PNC Championship, or any number of other partner-style events that pop up in the greater PGA Tour ecosystem. But you won’t see celebrations like these. Not Justin Thomas and Jordan Spieth giving palm-numbing low-fives nor Si Woo Kim prancing around after Tom Kim after his big-time putt on the 18th green.

There’s the buy-in from everyone on the team. Where else would you get major champions on walkie-talkies, jabbering about made and missed putts? But that’s what they did, the captains and their assistants, Immelman and Weir and Love III and Couples and many more, living and dying with every five-footer, none of ’em worth a dime.

There are the players’ families, forced into time together, activities together, uniforms together. Life on Tour can be solitary for players, not to mention players’ families. This week helps with that. Friendships forge along rope lines, cheering for a common goal.

There are the players themselves. From watching you’d think they’re all best mates, and some of them are — cue the Spieth/Thomas hot dog photo — but most of them aren’t. Homa explained this on Friday night:

“I’m not super, super close with anybody on this team, but I have always respected and gotten along with everybody, and it’s been amazing to watch these 11 other guys who are incredibly good, incredibly acclaimed, so many accomplishments, cheering us on coming down the stretch.”

They’re closer now; how could they not be? Going into this week, most of these guys had never shared a golf cart. By week’s end they piled onto carts, four and five and six at a time, beers in hand come Sunday evening. That changes things.

There’s the exposure for the International stars, too. Tom Kim is golf’s new superstar. Si Woo Kim reminded us he’s lovable and electric. Sebastian Munoz stared down World No. 1 Scottie Scheffler in Sunday singles as part of a 2-0-1 week. Cameron Davis provided an unforgettable finish to Saturday evening, finishing eagle-birdie-birdie alongside childhood hero Adam Scott. The golf world doesn’t always shine a light on its non-American stars, but this week it has no choice. Everybody benefits.

There are other little details you don’t get elsewhere, too: Partners reading each other’s putts. Players who are sitting out one session practicing on the course, all alone. Pros sharing state secrets with teammates during practice rounds, looking for an edge. The way the home crowd stays silent when an International putt drops, so you can hear every syllable of their celebration. The way spectators consolidate as matches end, figuring out which hole to chase to catch a glimpse of the day’s remaining action. Minutes after they’d clinched the Cup, Spieth, Thomas, Xander Schauffele and Patrick Cantlay convened on a cart.

“We’ve gotta go find Kiz,” Spieth said. So off they went, piling onto a cart, racing across the fairway to find Kevin Kisner, who was playing No. 17 in the last match of the day.

It wasn’t particularly surprising or impressive that the U.S. team took down the Internationals. The Americans are a dominant force. They were playing on a course that suited their games. And they were playing a decimated International side that was missing four or more of its top performers who’d left for LIV (I’m thinking here of Cameron Smith, Joaquin Niemann, Abraham Ancer and Louis Oosthuizen). But their performance was significant and historic. Spieth’s 5-0-0 MVP showing, for instance, puts him on a short list of performers. Nobody will get a chance to match that in a competition like this until Rome in September of next year.

In golf, these team events mark the time. The competitions themselves are fun, no doubt. But their scarcity — once per year for American teams, once every other year for International and European teams — makes them rare enough to feel precious and momentous. The way the teams are constructed makes them important, too: because golf doesn’t have codified all-star games, this is as close as we get. If you make a Presidents Cup team, that changes your career resume forever. In assembling the 12 best Americans, captains are crystalizing who deserves to be in that talented company. Early in the week, Spieth explained how it felt as the Team USA charter flew from the Hero World Challenge to Australia for the 2019 competition: “It sucked.” Once you make one of these teams, you never want to miss another. And fans use these teams to compare players and teams and events across decades.

Maybe that sounds nerdy or nostalgic, but beyond sheer entertainment value, sports are effectively only important with context. I met a man with plenty as I stood with my colleague Nick behind the range ahead of Sunday singles. Sam Reeves was dressed in the red, white and blue of Team USA staffers. Reeves is one of those people who knows everybody in the world of golf; stories that involve Pebble Beach plus figures like Adam Scott or Jim Nantz or Tom Brady always end up including Reeves, too. Several U.S. players went out of their way to greet him as they began their prep. It was only after Googling that I discovered he’s well into his 80s — he’s much younger in appearance and spirit — and learned more about his background as a cotton merchant. In this setting, he was part of the team. Who better to put this week in context?

“Tom Kim is like Rory revisited,” Reeves said. He remembered the distinct feeling of watching Rory McIlroy swagger his way around Quail Hollow in 2010 en route to a final-round 62 and his first PGA Tour win. Kim fist-pumped and bellowed his way to two points on Saturday, capturing the hearts and minds of even the staunchest U.S. fans. McIlroy was 20 at the time. Kim is 20. Reeves said it again: “Rory revisited.”

Celebrations began before play ended at Quail Hollow. They continued through a rowdy media availability and deep into the night. At a certain point, players from the U.S. team room spilt into the Internationals’. More soon followed. By the wee hours of the morning they were all together, the black-and-yellow blended with the red, white and blue, revisiting the week. Tom Kim got a photo with Spieth, Thomas and Collin Morikawa. Hideki Matsuyama’s caddie Shota Hayafuji had every American sign his shirtless torso. By morning, they were hurting.

This event goes to Montreal in two years’ time. Right now it feels like every player here should be there, too, searching for validation, revenge, camaraderie, competition. But it doesn’t work that way. Not everybody will get that chance. There’s always turnover from year to year, whether due to new talent or nagging injury or pro golf’s evolving landscape or the inevitabilities of time. But all 24 players will be fighting to get back on their respective teams. That’s worth something.