At the Presidents Cup, golf’s secrets are out in the open 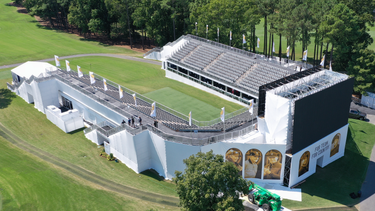 At the Presidents Cup, pro golfers are teammates — and not competitors — for the first time all year. That’s fun, but it’s also weird.

At the Presidents Cup, pro golfers are teammates — and not competitors — for the first time all year. That’s fun, but it’s also weird.

CHARLOTTE, N.C. — There are no secrets during Presidents Cup week. Well, except for this one: it’s weird.

After nine and a half months of unrelenting self-interest, golf’s best players entered Quail Hollow this week asked to do the opposite — to bond, to co-mingle, to fraternize, to hang. That dynamic is inherently different, particularly for the sports world’s most insular group of professional athletes.

“To be perfectly honest, we don’t get to root for each other,” Justin Thomas admitted during his press conference on Tuesday. “No offense to the other 11 guys on my team, but I’m not necessarily pulling for them to shoot 64 every time they play. I’m hoping we have good, competitive golf, and I just outplay them, you know what I mean?”

What Thomas means is that at the Presidents Cup, the incentives are flipped. It’s great to shoot 64, but it’s far better if everyone shoots 64. And how can Justin Thomas help the rest of the American team shoot 64? In part, by leasing out his brain.

Thomas isn’t alone in this endeavor. Everyone is encouraged to share a little bit during Presidents Cup week. During these weeks, it’s how the best players in the world get a little bit better.

“I think the coolest thing when you have these team events is guys are willing to share maybe a secret here and there,” said Collin Morikawa. “Unless you’re best friends with them and kind of played with them every single day, you just get to hear a little bit more about how everyone does it. It’s always nice to hear. It’s refreshing.”

There’s a wealth of experience split between the American and International sides, and as such, a wealth of secrets worth stealing.

“I love asking all the captains how they’ve done it in the past,” Morikawa said with a laugh. “Stricker has been teaching us how to chip, I think, for the last two and a half days.”

But not all secrets are created equal. In truth, Morikawa says, the information dump doesn’t always produce radical change.

“It doesn’t mean it’s the right way, right? But it’s just another perspective that we can look at,” Morikawa said. “I think that’s the biggest thing is that we just kind of bring all this knowledge in to just help us. It’s been really cool of a week to hear that.”

Some secrets aren’t secret at all. Like, for example, the role team golf plays in preparing golf’s best players for pressure situations. That’s why so many players jump at the chance to compete in a Presidents Cup, though only a few of them are willing to say as much about loud.

“Every match feels like you’re going down the back nine at a major championship,” Jordan Spieth admitted. “It’s like every hole with the roars and you’re going two or three up, and you’re like, I got this. It’s a very similar feeling to the nerves and how anxious you are to get started and the nerves on the golf course to competing in a major.”

At the Presidents Cup, the advantages carry far beyond the field of play. Sometimes, they carry right up into the following year. That’s what really sets this week apart. It’s weird, yes, but it’s sure worth it.

As it turns out, there is at least one secret to playing better golf. You just have to wind up on a Presidents Cup team to hear it.