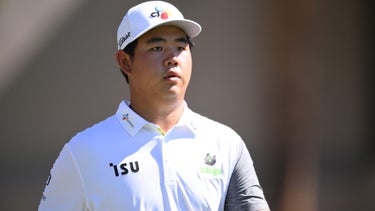 Patrick Cantlay tripled the 72nd hole at the Shriners Children’s Open Sunday to lose by three strokes to Tom Kim. Afterward, he broke it down.

Patrick Cantlay tripled the 72nd hole at the Shriners Children’s Open Sunday to lose by three strokes to Tom Kim. Afterward, he broke it down.

It was Tom Kim and Patrick Cantlay, duking it out in what seemed like a Sunday singles match we might see at the Presidents Cup for years to come.

When the final group came to the 18th tee Sunday at the Shriners Children’s Open, they were tied at five under and it looked like we might be headed for bonus golf for the second straight week.

Cantlay, who led the field this week in Strokes Gained: Off-the-Tee and was the overwhelming pre-tournament favorite, pulled his 3-wood on the 72nd dead left and straight into the brush.

“I made a bad swing, and it went where it went,” he said after the round.

He was in jail, his ball quite literally stuck between a rock and a hard place (a bush).

The Golf Channel broadcast team almost immediately assumed Cantlay would take an unplayable, but the drop would still leave Cantlay a difficult shot to the green, which was guarded by water short and left.

Cantlay tried to punch out. He was denied, but he knew the risk.

“I thought if I could get it back in the fairway, I’d have a chance, and I figured it was worth the risk because I didn’t think I’d have too much of a chance of getting it up-and-down from the brush there.”

That’s when Cantlay relented. It would be insanity to try the same shot over again, expecting a different result. He knew he had to take a drop.

Cantlay could be heard on the broadcast discussing with caddie Matt Minister what the scenarios were for him to still finish solo second, with a win all but out of the question after Kim ripped his tee shot down the middle. Matt NeSmith was three shots behind the leaders and in good shape in the 18th fairway.

In true Las Vegas fashion, Cantlay decided to go for the green with his fourth.

It was one of the more difficult 163-yard shots Cantlay could have been faced with: hardpan. Ball above his feet. Rocks and brush all around. Water looming short.

It was another gamble, but Cantlay had already gone for broke on the last shot.

He dropped near where his ball had crossed into the hazard and flipped a wedge to 36 feet from the pin. Making that putt for triple, which Cantlay did, couldn’t sweeten the taste after he played near-flawless golf for 71 holes this week, nearly shooting 59 just a day earlier. He ended up not even finishing solo second, instead tying for the runner-up spot with NeSmith, which cost Cantlay $160,000.

“I played well all week for the most part,” he said. “One bad swing at the end. Obviously would have liked to have closed the deal out today, but sometimes that’s golf.”