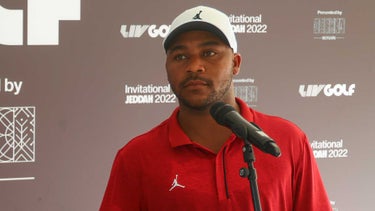 When Johnson was asked Wednesday whether his LIV experience has met his expectations, he responded with a thick layer of sarcasm.

When Johnson was asked Wednesday whether his LIV experience has met his expectations, he responded with a thick layer of sarcasm.

The first time Dustin Johnson faced the press at a LIV Golf event was at the tour’s debut tournament in London, in June. He was seated at a dais with fellow LIV participants TK Chantananuwat, Graeme McDowell and Louis Oosthuizen, and many of the questions, to no surprise, weren’t exactly softballs. Why did you choose money over your country? Why did you turn your back on the PGA Tour? How do you reconcile your decision to be here with Saudi Arabia’s human rights record?

McDowell answered that last query first. He said he was motivated by growing the game and using golf as a “force for good,” and that, ultimately, golfers “are not politicians.”

When it was Johnson’s turn to answer the same question, he had nothing to add.

In other words, next question, please.

Fast-forward four months to the seventh LIV event, being contested this week in Jeddah, Saudi Arabia, and a funny thing has happened to LIV player press conferences. There has been a marked shift from thorny questions around morals and geopolitics to more banal talk of course setups and weather, along with more trivial talk of mullets and how many of Rory McIlroy’s tears would fit into the claret jug. Even some of the queries about more weighty matters, such as the growing controversy around whether LIV players will earn world ranking points, seem to have grown increasingly sympathetic in their phrasing.

“You mean have another set of rankings?” McDowell said.

To which the reporter replied, “The OWGR points almost have an asterisk to it if you have a Dustin Johnson that’s not on the list.”

Which brings us back to DJ, one of LIV’s sparkliest recruits.

In the months since Johnson joined LIV, you wouldn’t characterize most of his press-conference answers as expansive or deeply reflective, just as they generally weren’t on the PGA Tour. But Johnson’s clubs have been talking. Last weekend, his T16 finish in Thailand clinched Johnson the 2022 LIV Golf Individual Champion title with two tournaments still to play. With that honor came an $18 million bonus — that’s in addition to the roughly $12 million he has earned in LIV contests so far this year. A tidy bounty to say the least, which prompted this question in the Wednesday presser in Jeddah:

So, you’re $30 million richer. How would you describe this four-and-a-half month journey you’ve had with LIV? Has it met your expectations? Exceeded it?

Here, you might rightly have expected an earnest, even semi-scripted response from Johnson on the merits of LIV and the privilege of being able to play for such princely sums. And while Johnson did more or less deliver that message, he did so in an unexpected and out-of-character way: with a thick layer of sarcasm.

“We talked about this yesterday,” Johnson began, tongue firmly in cheek. “I really regret my decision to come here. It’s just so terrible. I’m sitting there last night thinking about it, it was really bothering me a lot. Yeah, just can’t get over it.”

We’ll try not read too much into Johnson’s playfulness, but it does seem to indicate — perhaps more so than any of his previous remarks — that he has happily settled into his new tour and appears to harbor no regrets.

To DJ, golf is golf, no matter where he’s playing or whose paying him to do so. And the goal when his peg goes in the ground remains unchanged.

As he said of this week’s event, “If you want to win, you’re going to have to really golf your ball well.”