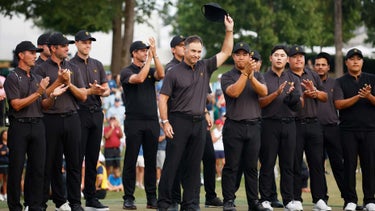 Patrick Cantlay flirted with 59 at the Shriners Children’s Open on Saturday. Here’s what else you need to know for Sunday’s final round.

Patrick Cantlay flirted with 59 at the Shriners Children’s Open on Saturday. Here’s what else you need to know for Sunday’s final round.

Patrick Cantlay has now shot 60 on the PGA Tour as both an amateur and a professional.

On Saturday, Cantlay burned the edge on the 18th hole at TPC Summerlin for birdie, which would have earned him the 13th sub-60 round on the PGA Tour.

“The putt probably carried a bit too much speed, and just missed it a little high,” he said after the round.

Despite the low round, Cantlay has a battle on his hands at the Shriners Children’s Open where he’s tied for the lead with Tom Kim at 19 under through 54 holes.

Here are three storylines we’re watching heading into the final round from Las Vegas:

Cantlay put on a ball-striking clinic on Saturday, hitting all but two fairways and missing just one green. His average proximity to the hole was just under 21 feet. Despite making 11 birdies, the longest putt Cantlay made was 12′ 11″, the only putt he made over 10 feet.

“Hitting it closer definitely helps,” he said. “It’s a lot easier to make six-, seven- and eight-footers as opposed to 15-footers.”

Perhaps more amazing, while Cantlay was tying the course record, he never held the honor on the back 9.

“When guys get going like that, it’s nothing but good for the entire group,” said NeSmith, who is three back and tied for third at 16 under. “A rising tide rises all ships. I was just happy that we could all play some great golf and kind of ride the wave.”

Defending champion Sungjae Im also joined the party Saturday, climbing up the leaderboard into a tie for 5th going into Sunday. Aaron Rai and J.T. Poston shot 62 and 63, respectively, to climb into the top 10 as well.

By the end of the day, the course scoring average was 67.87, more than three strokes under par.

Tom Kim back in the mix

Tom Kim didn’t exhibit the fiery bursts of emotion and fist pumps from two weeks ago on Saturday at the Presidents Cup, but he did his best to steal the show in Vegas.

Starting the day two off the lead, the International Presidents Cup team darling got the elusive birdie Cantlay could not on the final hole to tie him. Kim’s 62 saw him play the final 11 holes in eight under. With an inward 30, he improved his back 9 score by six strokes from Friday’s second round.

Kim is among several International team members playing well this week, and he said Friday it was a bit of a relief to not have to worry about teammates on the course now that he’s back at a regular Tour event.

Kim has yet to make a bogey all week at TPC Summerlin.

Is this Mito’s moment?

You’d be forgiven for forgetting Mito Pereira was the 36-hole leader this week after getting a little lost during the Saturday birdie-fest. Pereira put up a respectable bogey-free, four-under 67 in the third round which has him in a tie with NeSmith, three shots back at 16 under.

Friday was the first time Pereira had led on Tour since the 71st hole of the PGA Championship back in May. On that occasion, he blocked his drive into a creek at Southern Hills and made a gut-wrenching double bogey to miss out on the playoff.

This week, all parts of Pereira’s game have been solid, ranking second in the field in Strokes Gained: Tee-to-Green.

We saw signs of uneasiness from Pereira the Presidents Cup when he pulled a crucial tee shot left on the 18th in one of his matches, but he proved Friday he can go low enough to comeback and win here after a 63.

He is the only player in the top 6 on the leaderboard to shoot north of 63 on Saturday.