13 common misconceptions about how golf courses work, according to superintendents 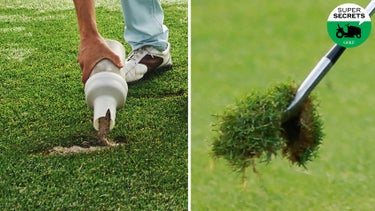 We asked a couple of superintendents to share a list of things that golfers just don’t get or fully appreciate about the work they do.

We asked a couple of superintendents to share a list of things that golfers just don’t get or fully appreciate about the work they do.

Matt Guilfoil is a superintendent, not a neuroscientist. But in his decades on the job, he has developed a theory about the human brain.

“Weird things happen to it when golf is involved,” Guilfoil says.

This transformation causes otherwise normal people to behave strangely. They plumb bob, for instance, and talk loudly to inanimate objects, and play from the tips when they can’t break 90 from the forward tees, and spout inane phrases like “That’s purina, pardsy!” Some even engage in conduct that betrays their ignorance about golf-course operations.

On top of his full-time gig, at Desert Canyon Golf Club, in Ariz., Guilfoil moonlights as co-host of From the Jingweeds, a podcast devoted to the turf-care trade. We asked him and his podcast partner, Dan Cutler (who is also a veteran superintendent) to compile a list of things that golfers just don’t get or fully appreciate about the work they do.

They said it: “There is no such thing as an ‘illegal’ pin. If it’s on the green, it’s legal. It might be cut in a tough location, but they can’t all be easy.”

2. Those bottles of sand are there for a reason

3. Frost delays are a bigger pain for us than they are for you

They said it: “They set us back. We have to rework our schedules. We get bombarded with complaints from golfers. Oh, and for the record, just because you didn’t see any frost at your house and can’t see any from the clubhouse doesn’t mean we’re not dealing with it here.”

They said it: “Staffing shortages are real, and our employees have a lot of other things to do.”

5. Speaking of bunkers…they’re supposed to be hazards

They said it: “They should be tough to hit out of.”

6. Ball marks do not repair themselves

They said it: “Depending on the season and type of grass, they can take months to heal.”

7. Repair your ball mark and one other isn’t a motto all golfers live by

They said it: “You say that because you’re talking to a superintendent. But if you really did that, there wouldn’t be so many marks on the green.”

8. We do not control the weather

They said it: “Do we really need to explain this?”

9. We are not meteorologists, either

They said it: “We use the same weather-forecast apps as you. We are also not plumbers, carpenters, electricians or wildlife-removal specialists.“

10. You do not want the greens as fast as you think you want them

They said it: “Golfers say they want fast greens until they play fast greens. Thirteen on the Stimpmeter is a recipe for a 6-hour round.”

11. We are not trying to gouge you

They said it: “Running a golf course is a business, and that costs money. Water, fertilizer, labor, materials. So, no: The greens fee should not be the same as they were 20 years ago.”

12. ‘Why is it cart path-only? Your machines are out there’

They said it: “Because we know where the wet areas are. And there are only a few of us, not hundreds of carts driving randomly all over the place.”

13. Going out before the first tee time creates all kinds of headaches

They said it: “It messes with our maintenance. And then when you pass us, you complain that the greens haven’t been mown and new pins haven’t been cut.”